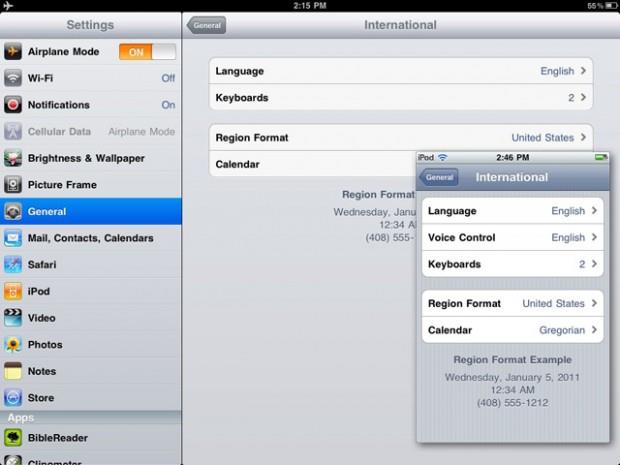 Need to use more than just English on your iPhone, iPod Touch, or iPad? While many people may never need to use multiple languages, there are plenty of us that want to type in several languages. Plus, even if you only ever use English, you may sometimes want to insert special characters that aren’t on the normal keyboard layout.

Apple has included a wide range of languages directly in iOS, so you can change the main language on your device or simply add an extra keyboard so you can type in another language. Plus, the default English keyboard has a number of built-in special characters you might have never noticed. Here’s how you can use your favorite language on your iPhone or iPad.

Your iOS device actually comes with 40 different languages preinstalled, and all you have to do is activate them. iPhone and iPad can display international fonts on websites and documents no matter which languages you have enabled, but if you want to change your main system language or type in a different keyboard, you’ll need to activate the language of your choice.

Open the Settings app, then select General and then International. This screen lets you change your Language, Keyboards, Regional Format, and Calendar year format.

iOS Settings work almost the exact same on iPhone and iPad, so we’re showing the steps on both devices in some screens and only iPad in others. The only difference is, everything will be smaller on your iPhone.

Let’s see how you can add new keyboard languages, insert special characters with the keyboards, and change your whole device’s main language.

To change your keyboard, tap the Keyboard option in the International settings pane. You’ll see the keyboards you already have enabled; tap Edit to remove a language or reorder them. The language on the top of the list will be the first to open whenever you start typing in an app. 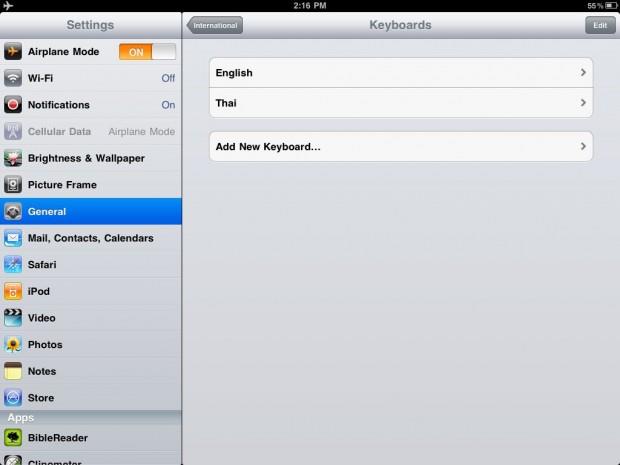 Want to add a new language? Tap Add New Keyboard and select from the 40 layouts  to add a new keyboard layout. Some languages, including Chinese and Japanese, have multiple keyboards avilable, so choose the one that will work best for you. Once you’ve selected it, you can reorder them in the previous screen as before. 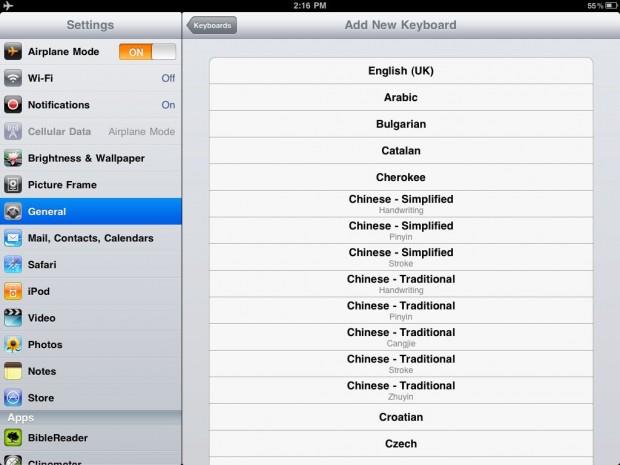 As soon as you’ve added a new keyboard layout, you can start typing with it in your favorite apps. Just tap the new button on the left of the spacebar that indicates your current language to switch to another language you have installed. Alternately, press and hold the button to select the language from a popup list. 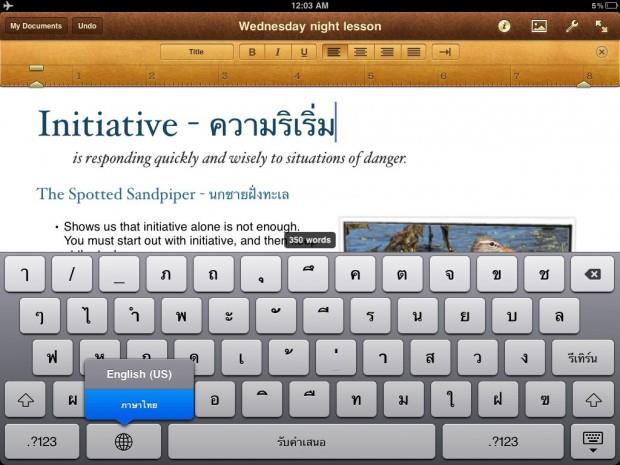 All international keyboards aren’t the exact same. The Thai keyboard has 4 rows of characters, while the Chinese handwriting keyboard lets you write a character with your finger as it attempts to auto-detect what character you’re writing.

You can use the Chinese Handwriting keyboard to enter English characters in handwriting, too! 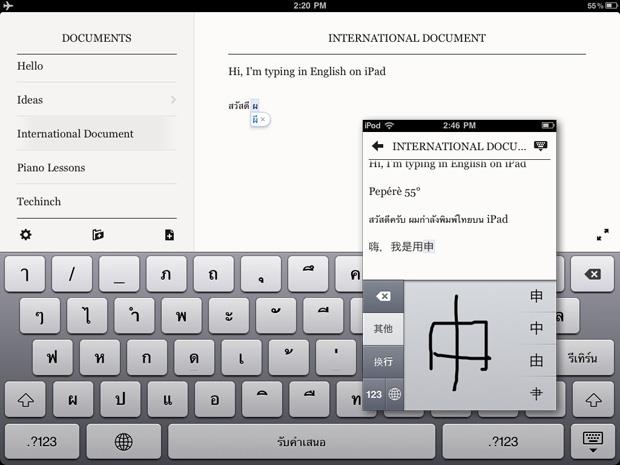 Sometimes it’s not a full new language you need; you just need a special character. For instance, on a PC, it can be extremely difficult to enter accented vowels and special symbols such as the degree symbol. Once again, this is something that the software keyboard on iOS does better than a traditional keyboard. Just tap and hold on the most similar letter to the special one you’re trying to insert, and then you can select the character you want from the popup. And if you’re wondering, you’ll find the degree symbol as an extra character under the 0! 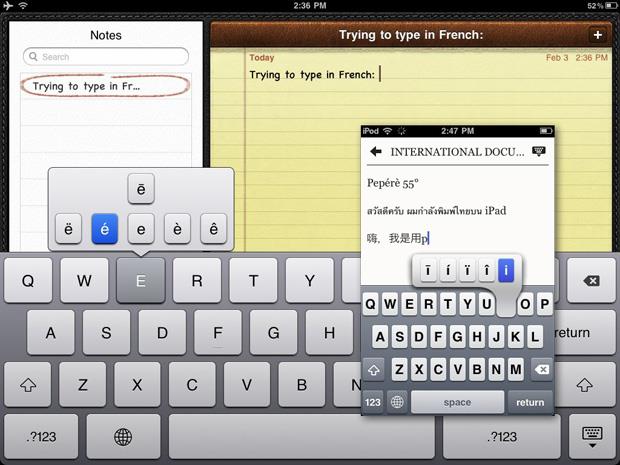 The virtual keyboard changes in some apps as you’ve likely noticed. In Safari or most alternate browsers, you can add .com to the end of a domain name by just tapping the .com button to the right of the spacebar. You can also use this button to enter .net, .org, or other localized domains based on your regional and keyboard language settings. As you can see here, I have U.S. domains listed as well as Thai domains like .co.th since I have the Thai keyboard activated. 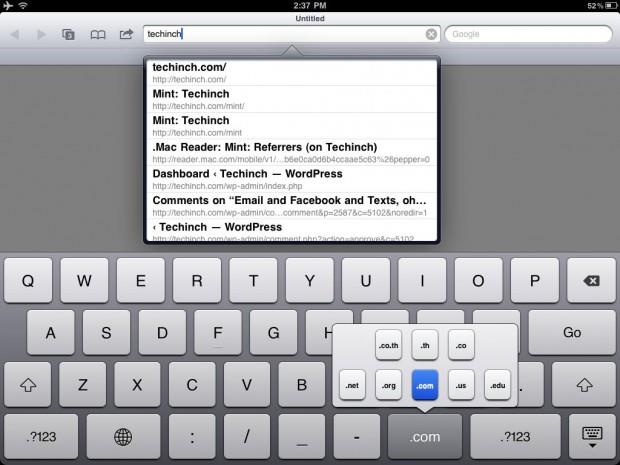 If you’d rather use a language other than English, or if your device came in another language and you want to switch back, you can change the entire system language from the settings. Just select Language in the International pane in Settings, and then select the language you want to switch to. Press Done to activate it. 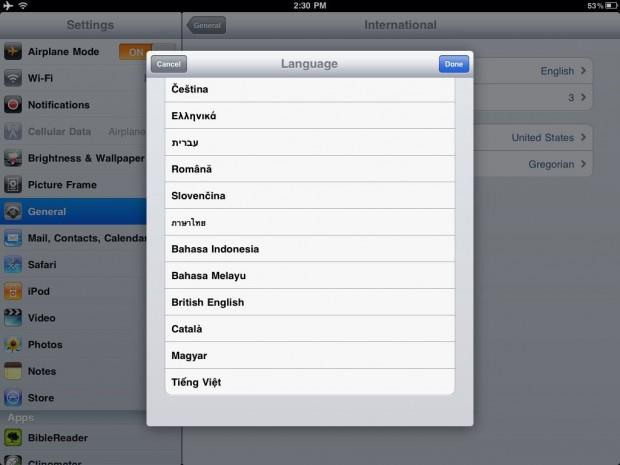 As soon as you tap Done, your screen will turn black with a message in the language you just selected letting you know that the language is being set. After a few moments, iOS will boot back up so you can use your device again.

This time, though, everything’s going to be different. Almost everything in the default Settings and apps will be translated to the language you selected, and you may even notice some icons being slightly different such as the on/off switch for airplane mode. Most apps don’t include translations, though, so they may still be primarily in English. Even still, it should be easier to use your device in your favorite language. If you don’t like it, you can always switch back! 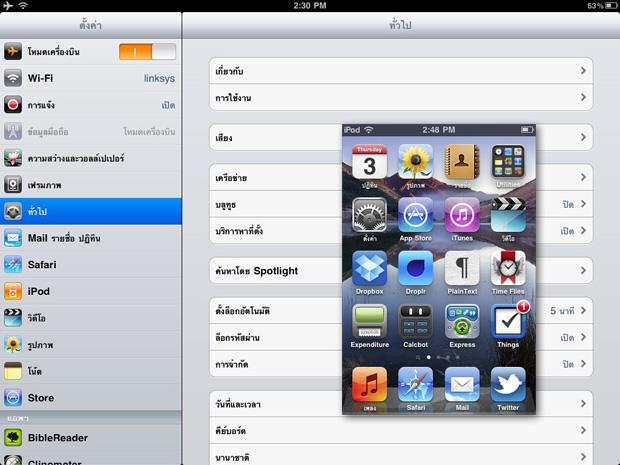 Apple’s made it amazingly easy for bilingual users to type in their favorite languages or even switch their whole device to a new language quickly. My aging Windows Mobile device doesn’t even display most non-English characters in websites, much less let you enter other languages from the built-in keypad. That’s the beauty of a software keyboard: it’s not fixed to one language.