The widely popular smartphone messaging service WhatsApp is no longer just being used to keep in touch with family or friends – it has become a tool to battle corruption, save lives, spread news and now, combat climate change.

If WhatsApp were a country, it would be the third largest in the world based on number of active users. And according to recent estimates, users are sharing more than 700 million photos and 100 million videos every day on the service, which has grown fastest in countries like Brazil, India, Mexico, and Russia.

While tackling climate change might not seem like the most intuitive function of this social messaging app, it is exactly this ability to connect populations internationally that makes WhatsApp a perfect tool for C40, where we strive to keep megacities around the world connected to each other through our city networks, utilising technologies from simple email to Skype and webinars.

As it turns out, WhatsApp is even more accessible than other technologies, particularly for C40 cities in emerging economies that still struggle with Internet connectivity. WhatsApp helps officials in those cities connect with their city peers even when low connectivity and time zone differences prevent other, more traditional methods of communication. Additionally, WhatsApp operates using wifi, making it less expensive than traditional texts (SMS), especially for correspondence between different countries. 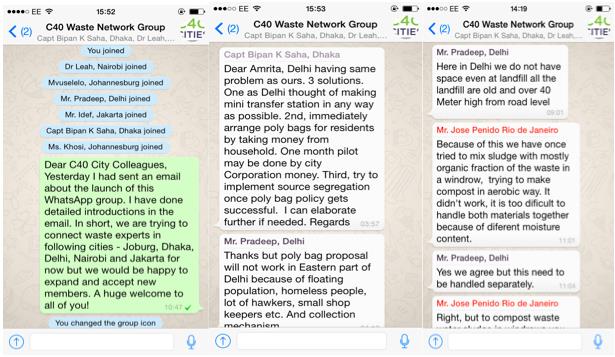 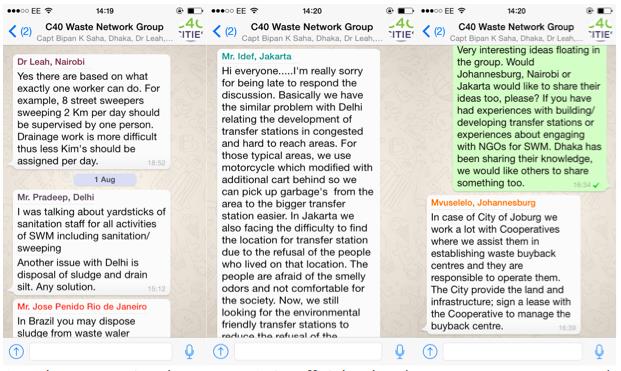 C40 first started using WhatsApp to engage with city officials during a waste conference in Indonesia. After receiving quick responses from those officials, we realized its potential to connect our cities in new ways. We decided to create a C40 Waste WhatsApp Group to drive discussions around reductions of GHG emissions through solid waste management systems. Soon, six cities joined, all from emerging economies.

Since the new group launched in June 2014, city officials from Dar es Salaam, Delhi, Dhaka, Jakarta, Johannesburg, Nairobi, and Rio de Janeiro have been sharing challenges around waste management issues, from road sweeping and landfill site remediation to transfer centers and disposal facilities. And most importantly, they are discussing potential solutions – all via instant message.

The group doesn’t just meet once or twice a month – the participating city officials message each other frequently, creating a steady stream of ideas and topics that spurs healthy debate. C40 staff from our Solid Waste Management Initiative moderate the group and also use the platform to announce and organise upcoming webinars and conferences. We are also using WhatsApp to communicate with individual city officials.

Yet there is more to be done: our member cities speak over 26 languages, which makes quick and effective collaboration difficult at times. Looking ahead, C40 could support many more city officials with greater impact if they could access simultaneous translation through a tool like WhatsApp. We are currently exploring opportunities to work with the tech community on language solutions and other creative approaches to breaking down communication barriers.