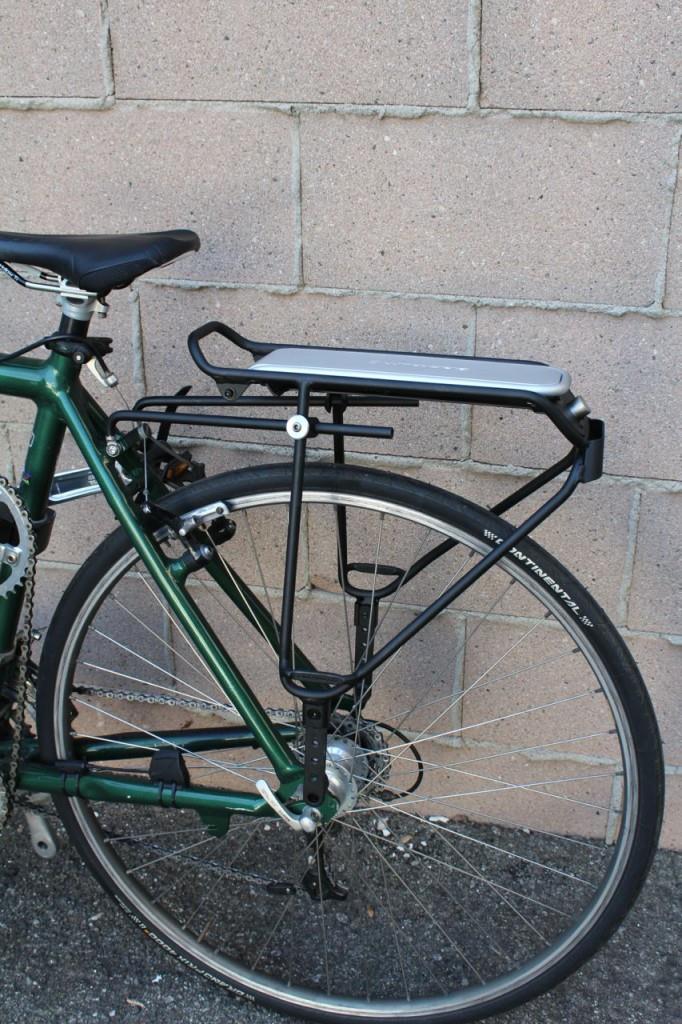 In 2012 Blackburn went through a major brand overhaul. A team of people inside what was still called Easton-Bell Sports (it’s now BRG Sports, but that’s a different story) sat down and started asking just what Blackburn should be. While Blackburn started out as a rack company, pure, simple, it had swallowed a number of other brands, most notably, Rhode Gear, which was then best known for the bags and panniers people usually hung from Blackburn racks. The outcome of this exercise was the determination that Blackburn would continue to offer a range of accessories, but that they needed to dial back into their roots and double-down on racks and packs.

I’ve got a soft spot for the go-anywhere freedom of loaded touring. I’ve promised myself that one day I’ll simply pack up a bike and roll out of my driveway with no clear plan. And because I like both touring and gear, touring gear excites whatever center of my brain governs adventure and planning adventure.

I purchased my first rack—a Blackburn, no less—in 1987. I also purchased a rack trunk from Blackburn’s sister company Rhode Gear. Deep in the wilds of my garage, both those items lurk in a box. I mention this because I wish to testify to the durability of Blackburn products and the fact that the ideas that worked then are still very serviceable.

Given how far the industry has come in nearly three decades, the reboot on Blackburn yielded a number of fresh takes on old ideas.

So what can I criticize about my old rack? Well it’s aluminum and I had to bend it to make if fit the braze-ons on my bike. Had that thing been in use on a daily basis, carrying some load, it would probably have broken by now, but for weekend use, it was fine. Also, it wasn’t particularly adjustable (as the bending would suggest). And anything attached to it was easily removed—both by me and by anyone who happened to walk by, should I happen to leave my bike somewhere. Locking the bike was easy enough, but the panniers? Good luck.

The Interlock Rack is a first-rate re-think of what a rear rack can do. It’s wildly adjustable, both in height and in reach. It can be mounted to bikes with 26″ wheels, 27.5″ wheels, 700C wheels and even 29″ wheels. Versatile. And depending on the size of the bags you wish to use, you can adjust how high the rack sits. The arms that attach to the seatstay braze-ons can be adjusted for reach, height and angle, so no matter how big the frame is, where the braze-ons happen to be positioned, or what style brake is employed, the rack can be mounted to the frame in a secure fashion. And if your bike doesn’t have braze-ons, it’s got insulated hose clamps so it will mount to any bicycle strong enough to hold it (I’m talking to you, carbon fiber). 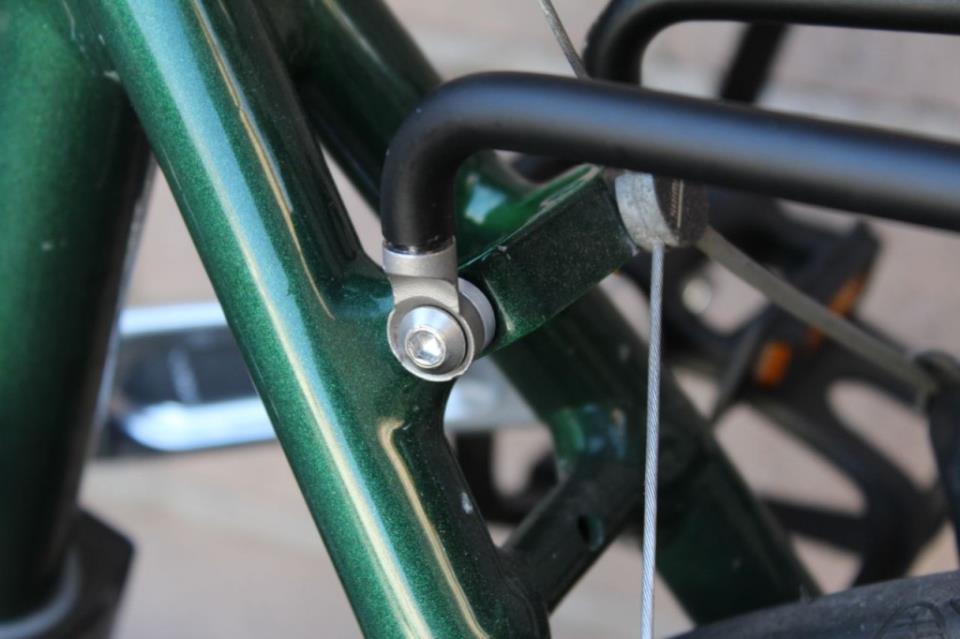 Pardon me while I write something really unusual. This rack locks. I’m serious. The rack is designed to work with Blackburn’s Interlock series of bags, which means that thanks to the hinged spray guard, when you hook your bags to the rack, you fold the spray guard down and when it clicks into place, it also locks. Don’t get me wrong, this is no Diebold security system. The tumbler is pretty simple. This device is meant to avoid crimes of opportunity—keep the honest honest. Naturally, there’s a spot to mount your Blackburn blinking light so that drivers might see you. 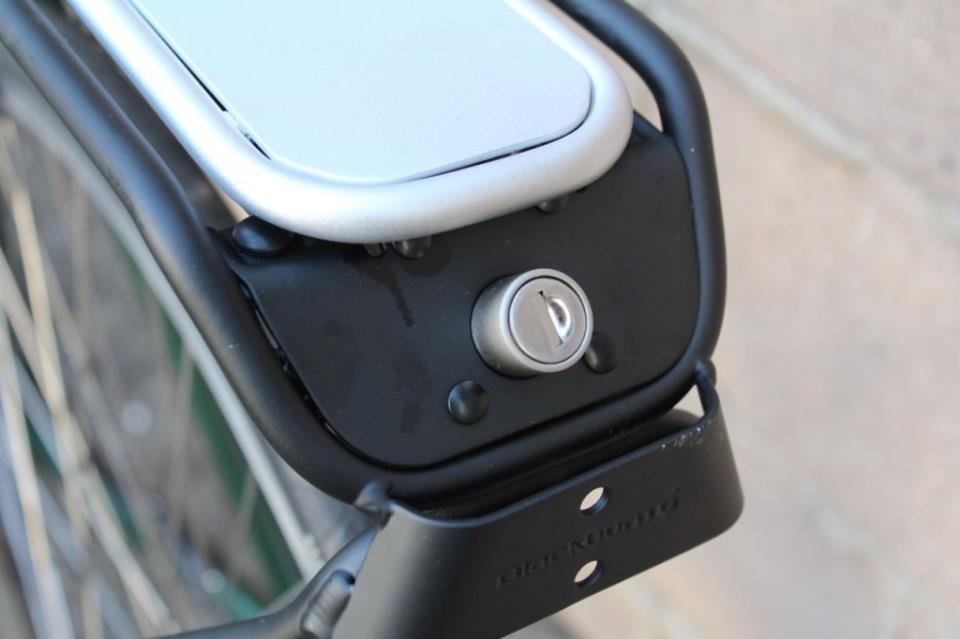 I mounted the rack and Barrier Rack Trunk on the tandem that I ride with Mini-Shred. I try to pick him up from preschool by bike as often as possible. It’s not uncommon for me to need to carry home drawings or things he’s made in arts and crafts. Stuffing those little creations in a jersey pocket is no bueno. And then there are the times that he started the day with a hoodie but doesn’t want to ride home in it. Having a small bag that can accommodate this stuff makes these trips all the more practical.

It’s fair to ask whether I really need a dry bag, which this thing is. It seals like the lips of a spy, and while that’s terrific, it rains in LA almost as often as the dinosaurs go extinct. So, no, I haven’t really had a need for one of this bag’s more selling features. Last year, when I met Jennifer, one of the Blackburn Rangers, she was using the Interlock bags. I’m such a geek that when I saw they appeared to be dry bags, my heart went pitter-patter, or something like it. And yes, I had to ask the unforgivably obvious: “So do they work?” 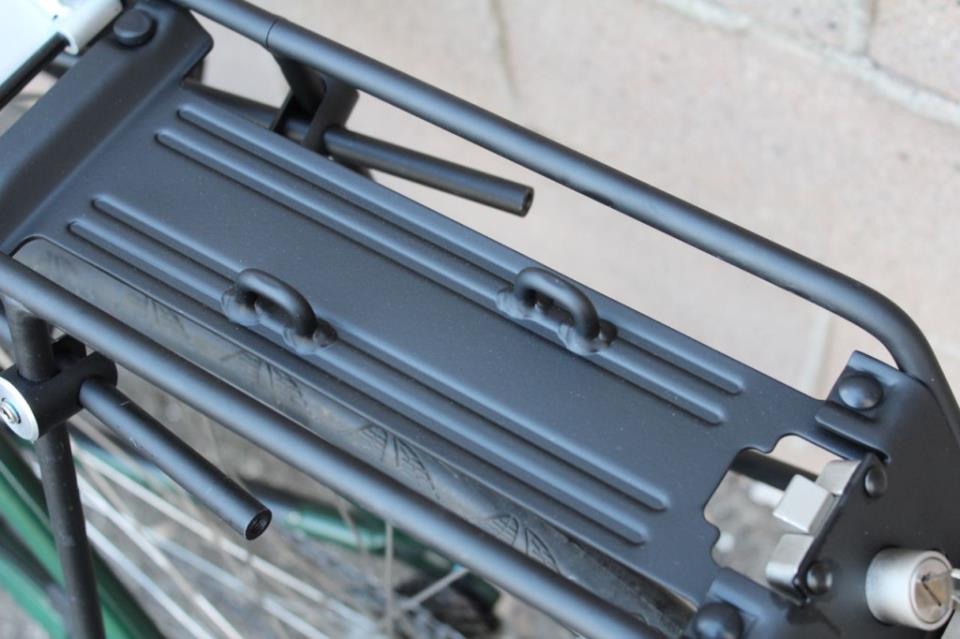 Her reaction indicated that it was such a non-issue she didn’t think about it. She shrugged her shoulders and said, “Yeah, everything’s stayed dry.”

Compared to the rack trunk that I used for years, which had one central compartment and three fairly useful pockets, the Barrier Rack Trunk has but one compartment lined with Velcro and equipped with two dividers. It’s a far more flexible system, which allows me to do things like bring home a drawing and a bottle of chocolate milk without the trashing the drawing. Mini-Shred likes to stop for snacks at the “drink store” as he calls it. I’m told it has a 9.5-liter capacity, but I don’t really think that way. It’s big for a rack trunk, how’s that? 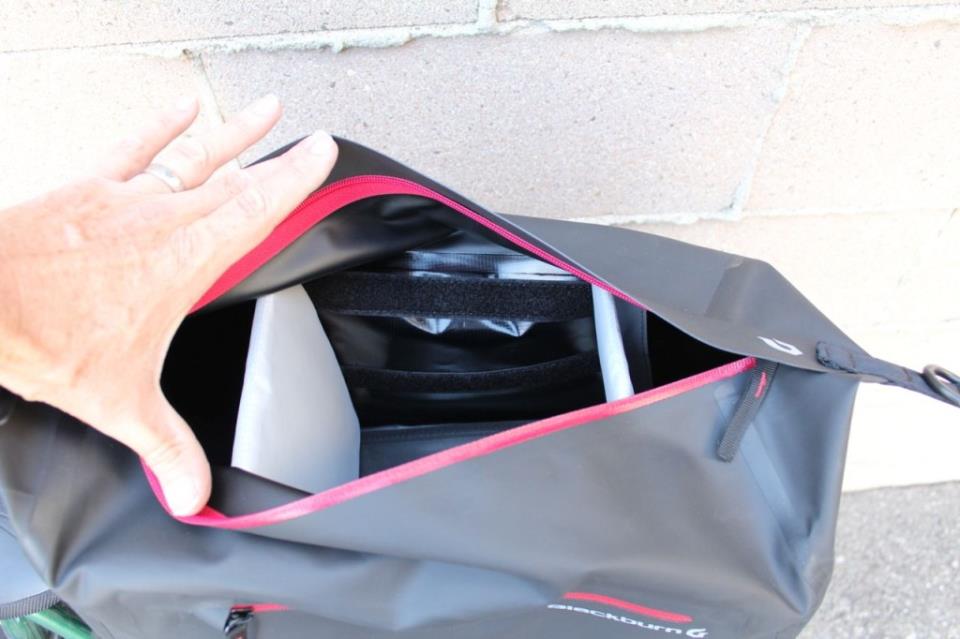 The bag also has one zippered pocket on the side that’s good for keeping a ten-spot and the key to the rack. The pocket is slim and snug; you’d need a lean wallet if you wanted to fit that in there.

The Interlock Rack goes for $119.99, the Barrier Rack Trunk another $109.99. Given what I’ve spent for this sort of gear over the years, these are a terrific value. You can see this stuff in action if you drop by the Blackburn web site; they produced a great video about the system.

Final thoughts: A rack and bags aren’t for everyone, but for anyone who wants to turn a bike into a beast of burden, these are dynamite.