When Apple introduced group messaging to  iMessage in 2013, it collectively blew everyone’s mind. But four years later, group texting on an iPhone feels like it can get out of control a little too quickly — and I desperately need sweet relief from the deluge of messages flooding my inbox.

SEE ALSO: How to get all of your text messages on your Mac

There are plenty of reasons to complain about conversations with large groups on iMessage, but before we can really nail down what’s wrong, it’s important to understand the technology.

Group messaging on iMessage basically works only if everyone in the conversation has an iPhone. So if there’s even one Android user in the group, all of your messages will be sent as a standard text (otherwise known as MMS). These are much slower to send and receive than a proper iMessage, especially when it’s a large picture file or video.

The issue is, when I’m deciding between two pairs of Adidas sneakers at Nordstrom, I need your input, like, immediately — not in 20 minutes when the message is finally sent through.

Besides the longer waiting times, this drawback means you’ll also have to get used to the hideous green bubble in chat. I don’t know about you, but I turn into a Grade A drama queen when that green hits my screen. So much so that I started communicating with the “greenies” as little as possible to spare my eyes from the wretched color.

Another problem with the iPhone’s group texting is the battery drain that occurs when your obnoxious friends won’t just give it a rest. (Disclaimer: I have absolutely been on the other side of this, and I’m not proud of my behavior.) But when your friends are literally lighting up your phone, it takes a huge toll on the device. Your phone is constantly using energy to notify you of the incoming texts.

Just last week, I went to an hour-long visa appointment where phones weren’t allowed. I was relieved to put my phone on silent and stash it in my purse, thinking I would expand its battery life that day by giving it a break for a while. It turned out to be quite the opposite.

When I left my appointment, I had a huge list of new text messages from two different chat groups, and my phone lost more than 20 percent of its battery. It had been working nonstop to get the messages since I was trapped in a government building made of pure cement (leaving me with a weak signal). As you can imagine, a flood of information about my friend’s new toaster and 40-percent off Aerie swimsuits didn’t make the battery drop worth it.

These issues would be less of a problem if Apple actually offered viable options for briefly tuning out of group messages. But, alas, it does not. There are a couple of ways to make group messages a little less annoying, but they’re not foolproof. 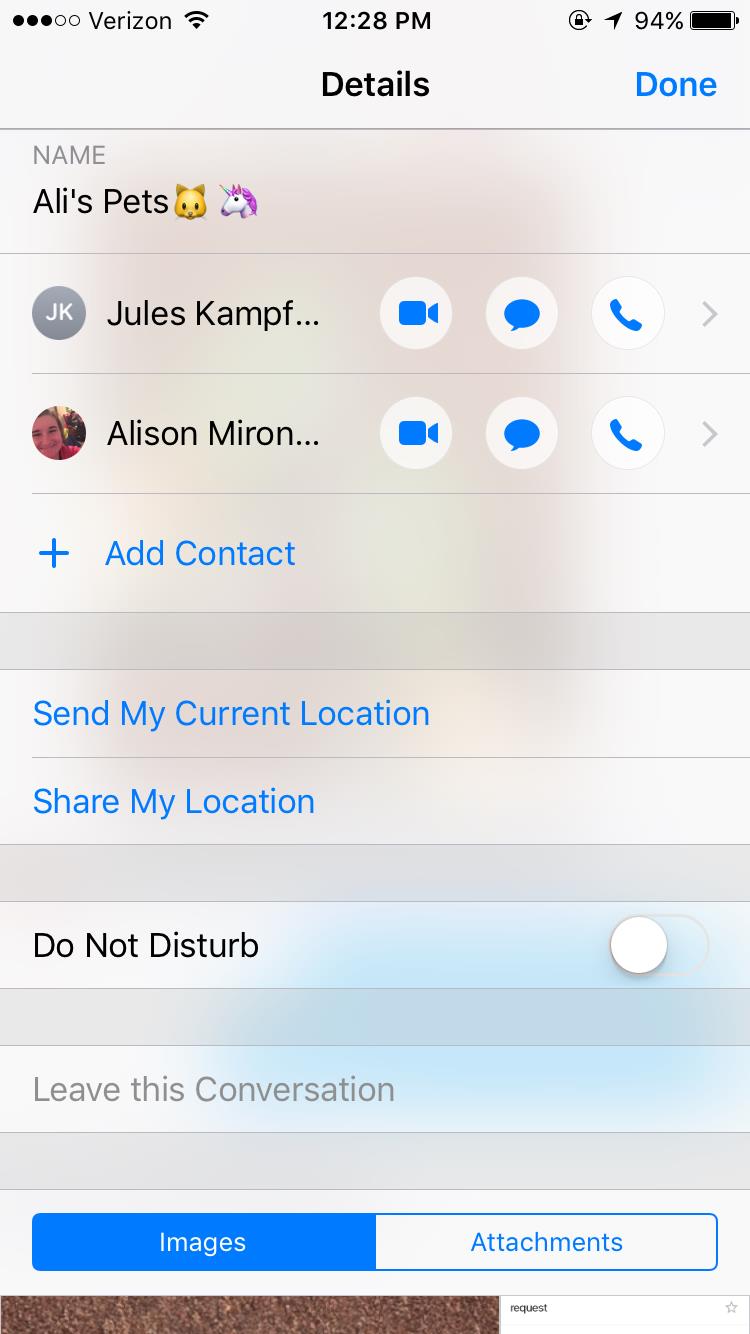 Group iMessages have a muting and leave group options, but they’re not perfect.

You can mute notifications by hitting “Do Not Disturb,” but this only works if everyone in the group is running iOS 8 or higher and using iMessage. So, if there’s an Android phone in the chat, you’re completely out of luck.

The other option is “Leave this Conversation.” But that option keeps you out of everything that’s going on, so it’s not really ideal. I don’t need to see every outfit my friends might wear to dinner, but I do need to know where we’re eating.

The other weird things is that you can’t leave the group chat if you’re the one who created it. As you can see in my screenshot above, “Leave this Conversation” is written in gray text, meaning nothing happens when I tap it. If the button were active, the text would be written out in a red font.

Considering all of these problems, maybe Apple should just leave group messaging to the apps that do it best. Most people are using other platforms anyways, so moving the entirety of your group messages to another app shouldn’t be so hard. WhatsApp and Facebook Messenger, for example, are much easier to manage and put everyone on the same playing field — no matter if they’re an Android or iPhone owner.

So, even though group messages on iMessage were fun and exciting when Apple first launched them, the technology just hasn’t kept up with our needs, and we’ve got other places to go for our messaging needs. It might be time for Apple to take a hint: Either update group messaging to make it more usable, or just get rid of it altogether.

WATCH: This plastic card could be the ultimate life hack