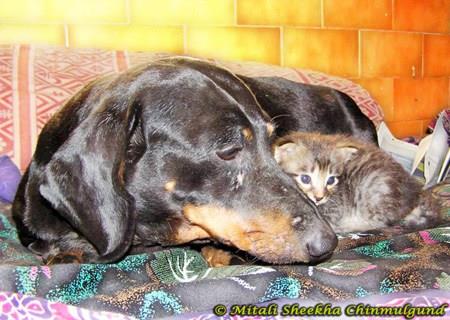 Some of you may remember that recently, I brought to your attention an existential question: who watches the dishwashers? No, seriously; it was a question of the existence of certain unwelcome visitors who come to your home unbidden, and keep a voyeuristic watch on tableware, utensils, and kitchenware getting wet and hot, lathered, rinsed and dried. Such is the fact of life in an urban fungal jungle.

As if having spore-bearing molds and yeasts as our close – too close! – neighbors wasn’t enough, a mid-June 2013 paper in PLoS One has pushed us to a shocking realization:

The Internet has a competitor in molding our lives!

Allow me to elaborate. Everyone knows that the single reason that the internet exists is for humans to stare at photos of cats and dogs. And ‘Like’. And discuss. And share. The cyberworld is the conduit via which we humans, our feline overlords, and our canine partners have been brought into close juxtaposition like never before.

Well, no longer the only one, the Internet is. University of Sydney, NSW, researcher Vanessa Barrs tells us the story of this new fungus, Aspergillus felis, the one mold to bind all three hosts together, humans, domestic cats and dogs.

Une infection fongique et les pauvres chats – this is the story of a fungal infection, and oh! Those poor cats!

Various members of the mold Aspergillus are ubiquitous in the environment. Quite a few of them are often implicated in serious diseases – that may be fatal if untreated – in human and animals. Spores of these molds are inhaled from the air; in hosts with immunity weakened by disease (such as hematologic malignancies), genetic disorders (such as cystic fibrosis), or therapy (such as immune-suppression for, say, organ transplants), the spores can overcome body’s defences and grow inside. They can grow in the nasal passageways, sinuses (i.e. cavities in the bones of the face), and lungs, and may spread to the brain and other organs via blood.

(A) Aspergillus fumigatus colony on artificial medium. Photo: mine. (B) Structure of the fungus under microscope. (C) fungus growing in the lung of a Cockatoo. (D) Fungal hyphae in the brain of a Turkey. (B), (C), (D) Photo ©CDC. Source: Public Health Image Library (PHIL) of CDC.

In humans, the disease (aspergillosis) may take the form of an allergic response (a.k.a. allergic broncho-pulmonary aspergillosis, ABPA), or may invade and destroy the tissues of the lungs (a.k.a. invasive pulmonary aspergillosis, IPA). Spores may also settle down into air filled pockets of lung tissue and grow into fungal balls (a.k.a aspergilloma), often seen in wild birds. In domestic cats and dogs, this mold is known to invade the nasal cavity and sinuses (a condition known as Fungal Rhinosinusitis, FRS), spreading its thread-like projections (known as hyphae) to behind the eye, into the brain.

The most commonly known member of this species is known as Aspergillus fumigatus, and its role in causing this disease is well-known and documented. It is also amenable to newer generation antifungals available to doctors. However, many of the other members (belonging to less-known species such as felis, lentulus, udagawae, et cetera) – which look like Aspergillus fumigatus from a distance, but are genetically distinct – may have varying degrees of susceptibilities to the existing drugs. This is a cause for worry for public health.

In this study, the cats infected with Aspergillus felis were seen in Australia and UK. They were of different varieties, including pure breeds (such as Russian blue, Cornish Rex, Himalayan Persian, Chinchilla Persian, Ragdoll, and Exotic Shorthair) and domestic crossbreds (short hair and long hair). Otherwise disease free, they presented with nasal discharge and/or sneezing. In addition, many of them had a fungal ball growing behind an eye, which pushed that eyeball outwards – the poor cats! Many of them had severe disease progression and had to be compassionately euthanized. There were a dog also from Australia, and a human patient from Portugal, both of whom were receiving therapy that suppressed their immunity. The fungus had spread throughout the body of the dog causing pain, fever, and abnormal heart sounds (a.k.a. cardiac murmurs); in the man, it was growing in the lining of the lung. They did not survive this onslaught either.

In the study,  Aspergillus felis was able to grow at a relatively high temperature (45˚C). In addition, the fungus was not much bothered by common ‘azole’ or ‘polyene’ antifungal drugs, but it did respond relatively better to some newer antifungals called echinocandins. The researchers studied the genetic makeup of the Aspergillus felis isolates and compared them to other isolates obtained from previous human infections. Using a combination of growth characteristics and unique identifying markers called BenA and CalM, they figured out the genealogy of this mold and implicated it in infections of humans and animals.

And that is a part of the slim but definite good news. In the fight against microbial pathogens, knowledge is power. Barrs and her colleagues have advocated further studies to keep an eye on this mold, Aspergillus felis, and find out epidemiological information, such as geographical distribution and prevalence – in other words, where it occurs, how far it goes, and who it schmoozes with. Eternal vigilance!

UPDATE: An abridged version of this post was published today on The Conversation UK.