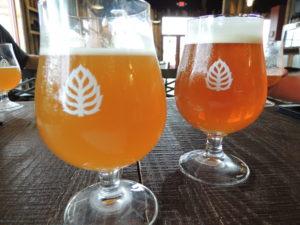 This Saturday, Lupulin Brewing Company is celebrating their 2nd birthday with a party of grand proportions.  There will be food trucks, anniversary glassware to buy, two new wonderful hoppy beers to pour in said anniversary glassware, and 4 live musical acts in a tent to keep you dry if it rains.  Now, if that isn’t enough to get you to break away from Art-A-Whirl in Nordeast, I guess I can

tell you about the sneak peak I had of Citridiculous and Not Bad For A Strip Mall Brewery, two Double IPAs that they will unveil for the event.

This DIPA is as advertised, a Citra bomb that drinks juicy and delicious.  At 7.7% ABV and 60 IBUs, it is a full-on barrage of citrusy aromas and flavors.  In an age when every hoppy name is taken, Matt (co-owner) could not believe that the name was not taken.  I love it when a beer absolutely lives up to its name.  I think that Lupulin googled “Where to get a metric shit-ton of Citra” and used 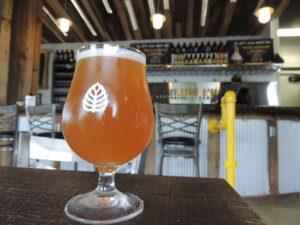 all of it in this beer.

The brew consists wort hopping of Citra with some Simcoe and Mosaic in the kettle for balance.  Before beer is put in the kettle, Citra hash and pellets are added.  When the beer hits the hash and pellets, that is when the magic happens.  Citridiculous is then dry-hopped 3X with Citra pellets.  If that isn’t enough, whole cone hops of Citra are also used.  A grand total of 12 lbs. of hops per barrel go into this beer.

Not Bad For A Strip Mall Brewery DIPA

This name is a friendly barb at all the people who don’t think that incredible beer can be brewed in a strip mall.  Those of you who have ever been to Denver, CO. or Burlington, VT, know that assumption is poppycock.  The Not Bad For A Strip Mall Brewery DIPA is 10% ABV and 50 IBUs.  This beer is more complex than Citradiculous.  The different hops allow for a juicy and more mango and tropical fruit flavor up front.  If you are patient, the hop bite comes in at the end for balance.

This beer again has hop hash in the kettle along with Ekuanot and Simcoe.  It is dry-hopped with Simcoe, Azacca, Mosaic, Ekuanot, and Amarillo.  At 10%, this drinks smooth and without a burn.  The beer is hazy with a bright orange appearance.

Both of these beers are great for those drinkers who don’t want to have their palates ravaged by aggressively bitter hops.  The name of the game here is balance.  Lupulin always brings balance to the table when brewing anything and I feel it is fitting that these two successes will be flowing to celebrate their anniversary.

On Saturday, May 20th, there is going to be a lot more than just two fantastic beers happening at Lupulin Brewing Company! 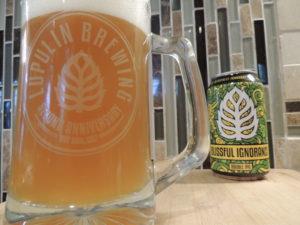 At 9 am, the 5K will be happening on a course around the brewery.  The registration is open now and you can register the day of the event starting at 7:30am.  Participants receive a beer (or root beer for the kiddos) and a target heart rate for participating.  The kids fun run starting at 11am.  For more information and registration, check out SoleMotion’s event page.

From 11-4 there will be a craft fair in the taproom.  Local artisans will have all sorts of fun things for sale.  What a great opportunity to support local artists and drink some great local beer! 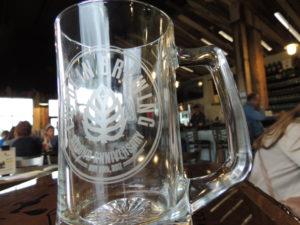 What kind of a party is it without a commemorative 15 oz mug with a cool Lupulin Brewing Logo on it?  The mugs $20 and include 2 tokens you can use on a beer.  It is a good deal because the pours of the anniversary beers are 10 oz. servings, but if you use a token in a mug, you get 5 oz. for free!  They have already sold about 150, so don’t delay and order yours now.  Plus, who doesn’t need a sturdy mug in your basement bar to wet your whistle?

There will be four musical acts on the stage.  The headlining band Sonder will help everyone rock and roll with their epic playlist of classic and modern rock.

All the elements of the festivity will remind us why the MN craft beer scene is lucky to have Lupulin Brewing Company blazing a trail of hoppiness through our great state.  They have struck gold with their Blissful Ignorance and Hoey and Apricot Blond are on the way in cans.

Lupulin Brewing has a lot to celebrate.  However, more importantly than the beer, are the people who have supported Lupulin over the last two years.  Folks have embraced the taproom and made it a wonderful place to gather.  Every time I have been up there, Jeff Ziert (Co-Owner) has been a fixture in the taproom, greeting friendly faces by name as they walk in and grab a beer.  If there is one thing I can say unequivocally about this business, it is that beer will only get you so far.  It is the passion for quality and sense of community that really makes a brewery a place you want to go.  I am sure that there are going to be many more fantastic reasons to celebrate for years down the road at Lupulin Brewing Company.  Prost!

If you liked this article and do any online shopping, consider using our Amazon Affiliate link below.  It doesn’t cost you any extra and we get a small percentage of what you spend to help keep the blog going.