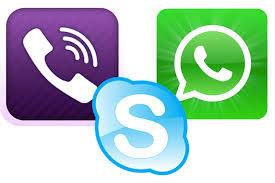 Communication services like Skype and Viber have disrupted the international calling service just like call back has done years ago. If you are wondering if your calling service has a chance to compete with this services. Here are ten reasons that will encourage you to take on the challenge.

The fact that Skype ,Viber or WhatsApp  run over the Internet is both their strength and their Achilles’ heel. The Internet is not free, Free calls between Viber users imply that both ends of the communication have access to Internet. The cost of Internet access varies widely between countries and Internet Service Providers (ISPs). In developing markets the cost can be prohibitively high. Broadband expansion continues grow reaching more people every year but services are still not adopted for everybody. According with the Internet Telephony Union ITU, only 30 of every 100 people in developing countries uses Internet. That is a big difference with the 76 of every 100 people in developed countries.

When it comes to access Skype, users can either use desktop computers or smartphone apps. While mobile app adoption is growing, the main use of Skype is still by desktop computers. In developing countries only 30% of the population has a computer at home. While “Internet Cafes” might be available, making a Skype call requires some planning that might be challenging and frustrating. People cannot be reached at any given time which defeats the purpose of instant communication.

So more people have smartphones and Skype, Viber and WhatsApp have smartphone apps that allow users to connect. Same as with the Internet and computer access, smartphones have a much smaller number of users in developing countries than in developed countries. For many people in Africa and rural India, a GSM based phone with SMS is all that is needed. In many cases it is all they can afford. Service Providers are constantly promoting the shift to smartphone technology and younger generations are starting to experience phones that are more than for making calls. Nevertheless, access to a smartphone does not equal access to Internet.

We already mentioned that the cost of Internet access in developing markets makes services like Skype or Viber not so widely adopted. Another important factor is the quality of the connection. Service Providers in developing countries are implementing 3G and LTE networks everywhere. The “last mile” of the connection is being address but as the network expands and more users acquire the service, the backbone also needs to be updated or at least managed to handle the increased in traffic.  In many cities of Latin America, 3G internet services can be affordable but the quality of the service might not be the good enough to sustain a Skype call, much less a video call. Over saturated urban areas or low cost / low bandwidth data services make the quality of service bad enough for users to switch to the old trusted regular phone call.

If you were born before the 90’s you know what the life before the Internet was. Skype, Viber and WhatsApp  thrive in young and young-adult demographics. While many users of these services enjoy the apparently free service calling friends and family abroad. Many still need to make calls to people that several reasons might not be ready or willingly open to try something new, the regular telephone works perfectly fine for their needs. Immigrants that want to call back home might not have the option to have a Skype users on the other end.

Underserved regions. Too far or too expensive.

There are many unserved regions around the world where only a regular phone call can be done. These regions can be too remote for the data services to reach, can be too expensive for locals to adopt it or too expensive for Skype users to make a call using Skype rates. Here is where a service that focuses in those regions and creates cheaper routes with better quality can thrive

In many countries VoIP services are blocked for either business or political reasons. Skype type services might not be willing to take on the challenge of serving these regions just because the market is bigger and “easier” in other regions. Services that respond to the demand of these regions can provide solutions like call back, or VPN tunneling and unveil a new group of users.

Global communication is a big and very lucrative business. Big corporations look to the bigger markets and work on new services. These services are targeting users in developed countries, mostly medium to large enterprises.  Developing markets might not have the capacity, or the need, for these new services and might end up left behind. Unified communications is a fast moving market in which big companies are fiercely competing. As the economy in developing markets improves and business grows, the need for these new unified communication and collaboration tools will be more prominent. In the meantime, simple voice communications will remain very important and very lucrative for those that understand the market and developed business that can serve its needs now and in the future.