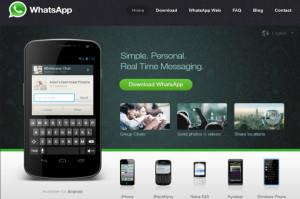 WhatsApp is a cross-platform, almost free messaging app that allows you to call or send a text message by using the internet. Boasting of over 1 billion downloads from the Google Play store, and over 800 million active users, it is not hard to see why WhatsApp is considered to be the most popular messaging platform in the world. Unfortunately, the popularity of this ad-free, encrypted chat app has caused bans in some countries, and potential bans in others. However, by using a VPN, you can bypass the blocks and use WhatsApp from anywhere..

As we mentioned, this app is banned in some countries. Most would not expect that sort of behavior from western countries, but surprisingly enough, one of the countries debating a ban is the UK. That is because of the UK’s Snoopers Charter. The Snoopers Charter states that companies need to make their apps less secure, or hand over the decryption keys. Despite the impending ban, be aware that WhatsApp does not require a warrant before handing over content sent and received by customers. In other words, they meet the criteria for being less secure.

Another factor to be aware of with WhatsApp is the voice feature. The website touts it as a way to save money calling other countries. However, if you want to use WhatsApp for that purpose, the app uses 1.2 mb per minute of data. That is fine if you are on unlimited Wi-Fi, but if you do not have a strong data plan, this app will gobble that up fairly quickly.

To share an interesting piece of news about WhatsApp. If you travel to Dubai, and you swear in your text message, you will face a fine of £45k (almost $70k USD) and probable deportation because of their new laws. For an app that was designed to be encrypted with 256 bit encryption, it certainly does not sound that way. Please keep in mind, we are not saying $1 a year for the app is a bad deal, but if you are going to use WhatsApp, you should not do so without the extra encryption of a VPN.

So, let us explain a bit about VPNs. A virtual private network (VPN) is software that creates a secure connection to a server, possibly in another country, depending on what goals you have. Here is a good reason for using one if you are in a country that blocks WhatsApp. A VPN may be used to unblock access to geo-restricted apps like Voice over IP (VoIP). In other words, if your country blocks WhatsApp, just connect to a country where it is not restricted. That is because governments use geo-blocking. Geo-blocking technology identifies a user’s location based on IP address. In this case, the technology creates a barrier that will keep blocked content out. By selecting a server in a different country, you could get around these restrictions.

That plays directly in to the second reason for using a VPN. VPNs provide a layer of encryption for your internet activity. As we mentioned, without the extra layer of security while using WhatsApp, you run the risk of getting fined if you are in Dubai, or just having the government snoop on you as mentioned in the UK. Of course the UK Prime Minister says they won’t do that unless necessary, but given the track record of the UK, that is a hard pill to swallow.  Now that we have shown you the advantages for using a VPN, we have several companies that will provide you with a good experience.

No matter which of our choices you pick, they all have different protocols you may use. All of the selections we offer here use secure encryption, but choosing the OpenVPN protocol will always provide you with the best protection. If speed is of the essence, you would use OpenVPN (UDP). That is the best option for WhatsApp, if at all possible. The data is not guaranteed to get there, but typically there is not an issue. If you have connection issues or problems with the connection dropping, your best choice would be OpenVPN (TCP). The TCP version is not quite as fast, but the data goes through error checking. Because OpenVPN is not supported by some mobile devices, If you plan on using WhatsApp on a mobile network, there are other good protocols including L2TP and IKEv2 that may be used for good security. Now that we have gone over that, we will go over our choices for providers.

For unblocking content and securing your data, we recommend IPVanish. They don’t keep logs and have a kill switch feature, so you are protected if the connection disconnects. If you are in a country that bans usage, that is important.  They also offer a mobile client, and have the fastest network in North America and Europe, so you would only need to connect, and could message or call as much as you wish. Again, if you are going to call, it would be wise to use Wi-Fi.

You may feel free to investigate our top 10 VPN services page for other good WhatsApp VPN providers. That said, we have picked the best services overall, so you should not have to. We used speed, price, and security  as the criteria basis behind our choices. In addition, we also picked the companies with large numbers of network servers you may wish to connect to in unblocked countries, as well as others. In your search for a dependable VPN provider, choose the ones that will secure your privacy and have fast networks for clarity, especially in other countries.