How is language evolving on the Internet? In this series on internet linguistics, Gretchen McCulloch breaks down the latest innovations in online communication.

We can’t actually hear someone chortle or guffaw through the internet, but we still want to express our emotions. Luckily, internet residents have come up with a whole slew of ways to convey laughter online—here are 15 of them. Which ones do you use?

The classic acronym for laughing out loud (it may once have meant “lots of love” or “little old lady,” but it doesn’t anymore). However, lol has been around long enough now that it doesn’t really mean out-loud laughter either—linguist John McWhorter says it now indicates empathy. For genuine laughter, make sure to emphasize it somehow: all-caps LOL is a good start, or try one of the longer variants below. (Lol doesn’t count as emphasis; it’s probably just autocorrect.)

2. OTHER SPELLINGS OF LOL

When we treat lol as just a word rather than an acronym, it means that we can change things about the letters just to indicate a different pronunciation, and without trying to come up with something they stand for. Changing the vowel, as in lel and lawl, indicates a more laid-back, less-laugh-y response, whereas repeating part of the word, as in lollll and lololol, indicates more actual laughter. And the combination of all-caps and reduplication—LOLOLOLOL—is the most likely to be genuine laughter of all the lol-variants, the more -OLs the better.

It’s not just lol—there are other acronyms indicating laughter, such as lmao, lmfao, rotfl, rotflol for laughing my ass off, rolling on the floor laughing (out loud), and of course they can also be capitalized for emphasis. Lmao and lmfao are still relatively common, but while ROTFLOL had a great cameo in Weird Al’s “White and Nerdy,” it and rotfl have gotten rarer.

4. WORDS MADE FROM LOL

Lollerskates, lollercoaster, loltastic, roflcopter—these words are fantastically creative, but like rofl, they ring “vintage early 2000s” to me. Perhaps they’re due for an ironic revival? Another expansion is lulz, but it’s more of a noun than an emotive response: you can do something for the lulz or say that much lulz were had.

Another classic laughter expression that, like lol, has weakened through repeated use. Plain haha or autocorrected Haha are sufficient for mild amusement, but for true laughter, go for all-caps HAHA or one of the expansions below.

You can go shorter, for less amusement (ha, aha, heh), or longer, for greater amusement (hahahaha, bahaha, ahaha). You can also vary the consonant (bahaha, gahaha) or the vowel (heh, hehe, heehee). Typos, like ahha or hahahaah, may indicate you’re laughing too hard to type properly. Caps, as ever, for emphasis. Combining them is not common (I’ve never seen *behehe or *ahehahe or *abaha, and even BAHAHA is rarer than HAHAHA).

Fairly straightforward: evil or mock-evil is expressed as a variant on mwahaha or muahahah, with the usual caveats about reduplication of ha and all-caps for emphasis.

8. HAHA IN OTHER LANGUAGES

Other languages use repetitions of different symbols, such as Spanish jajajaja (that’s the “j” sound as in jalapeño), Thai 5555 (the number 5 is pronounced ha), or Korean ㅋㅋㅋㅋ (pronounced kkkk—vowels are only written for louder laughter). A few languages also have their own acronyms, such as French mdr (mort de rire “dying of laughter”).

You can also choose to transcribe what you’re doing in the third person, almost as if you were giving stage directions of yourself. Some platforms may automatically turn *g* into a “grins” emoji, but you can also write longer versions like *laughs* or *laughs uncontrollably* or *spits water on keyboard*. This style is less common with laughter though, and more common with emotions that are hard to draw and don’t have onomatopoeia, such as *sighs heavily* or <\sarcasm> or #headdesk.

10. FACE WITH TEARS OF JOY EMOJI

The crying-laughter emoji gets its own category because it’s the most common emoji on Instagram. And it’s definitely the laughiest—Instagram engineers found that it’s used similarly to lolol, lmao, lololol, lolz, lmfao, lmaoo, lolololol, lol, ahahah, ahahha, loll, ahaha, ahah, lmfaoo, ahha, lmaooo, lolll, lollll, ahahaha, ahhaha, lml, lmfaooo. And like the lol and haha families, this emoji often gets repeated for emphasis.

11. OTHER SMILING EMOJI AND EMOTICONS

If you’re not a fan of the tears of joy emoji, there are lots of other happy emoji, such as:

Or even simple emoticons, such as 🙂 :’) 🙂 😀 :’D 😀 XD =D. The problem with this set, though, is that it’s not obvious that they’re laughing as opposed to just smiling, which is something that the tears of joy emoji makes quite clear. Adding a tear to the emoticons may help, or repeating them in full:

Or in part :DDDDD.

If an emoji isn’t quite big enough to express your laughter, you can go for a sticker, at least in platforms that support them such as Facebook or Whatsapp.

Unlike words, emoticons, or emoji, it’s not common to repeat a sticker for emphasis, probably since they’re already so large.

For even bigger and more specific kinds of laughter, I’d recommend the reaction gif. Perhaps you’re doing a disbelieving-explosion laugh like David Tennant in Doctor Who?

Or maybe you have the head-shake laugh, like Joe Biden? 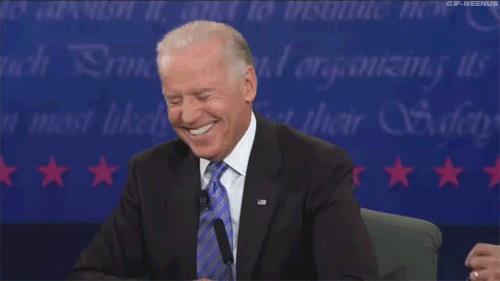 Reaction gifs really get at why we’d bother having so many ways to express laughter online—there’s a whole lot of ways of laughing. You may need to do a little digging to find the right gif, or you could do as many Tumblr users do and keep a folder with useful-looking gifs as you come across them.

14. IMAGE OR VIDEO CLIP OF YOUR OWN FACE

Or maybe you’d like to be more personal with your laughter than a gif of someone else can convey? Well, in that case, if you’ve got quick reflexes and can pull up an app while you’re still laughing (or if you’re a good actor), you can grab a picture or short video using Snapchat, Instagram, or Vine and post it or send it along.

Finally, if you’re opposed to hyperbole, you could always go in the other direction. May I recommend LQTM (laughing quietly to myself) or, for the ultra-literalists, NE (nose exhale)?