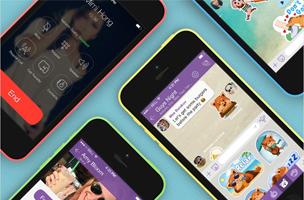 Viber 4.2 features include multiple photo-sending capabilities, an option to create a list of blocked numbers or contacts, longer video messages and a typing status indicator for desktop and Android devices. The company has also made the app available to BlackBerry 10 users.

Viber has been redesigned from the start for simplicity and ease of use. Taking our cue from the clean, flat look of iOS 7, we wanted Viber to feel like a completely seamless part of your device. Our top priority is the enthusiastic community of users who rely on Viber every day to communicate with their friends, family, and important contacts. The new iPhone version we released today will make it easier and more fun than ever before to stay connected.