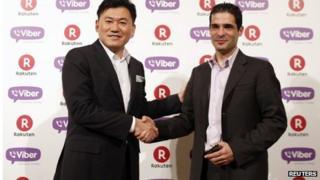 Messaging app Viber has been bought by Rakuten, the owner of online retailer Play.com.

Rakuten, which also owns the Canadian e-reader Kobo, said the purchase would allow it to expand its digital content into emerging markets.

“This acquisition is a totally new strategy that will take Rakuten to a different level,” said Rakuten’s chief executive Hiroshi Mikitani.

He suggested that Rakuten users might be able to use Viber’s instant messages to contact an online store while considering a purchase.

“Sharing similar aspirations with Rakuten, our vision is to be the world’s number one communications platform, and our combination with Rakuten is an important step in that direction.”

Rakuten has been on a buying spree over the past couple of years – purchasing Europe-based video-on-demand company Wuaki.tv in 2012, the Singaporean online TV and film streaming Viki last year and a stake in the online scrapbook site Pinterest.

The US, Russia and Australia are also among its biggest markets.

He pointed out that social messaging apps tend to be used a lot by younger people, many of whom do not use email, so for a company such as Rakuten it gives them an opportunity to promote other products, such as games, to that generation.