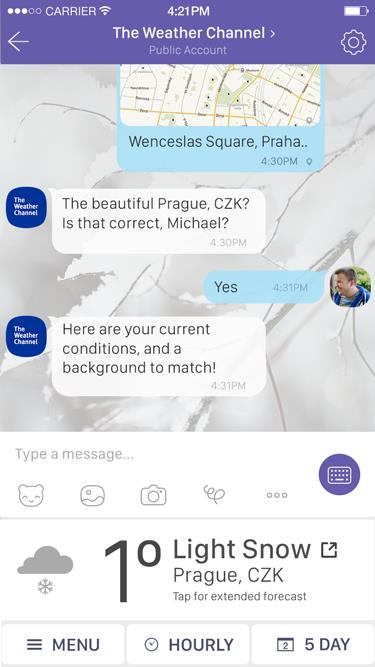 Popular messaging app Viber today launched a new account format, called Public Accounts, which allows businesses and brands to interact with users. More than a thousand Public Accounts from such brands as BBC, Mashable, The Washington Post, The Weather Channel and more were available at launch, with many more to follow in the coming days and weeks. Subscribing to Public Accounts allows users to get updates from brands they love and post messages that other followers will see.

Public Accounts marks the first time users and businesses will be able to interact with each other without having each other as a contact on Viber. The company has no plans to charge for Public Accounts at this stage.

To find Public Accounts from your favorite brands and businesses, tap the Public tab in Viber for iPhone, then hit the magnifying glass in the upper left corner to browse featured Public Accounts and those that are relevant to your current location.

Viber’s iPhone application on the App Store was bumped to version 6.5 this morning with support for the newly launched Public Account and a simplified media menu that lets you send photos, videos and voice messages with fewer taps than before.

Left: Dedicated gallery, camera and sticker icons let you express yourself faster Right: tap and hold the mic icon to record, release to send or slide left to cancel.

In addition, Public Accounts will open the door to Viber hosting bots, too.

Public Accounts should not be confused with Public Chats, a feature Viber rolled out in 2014 that lets one or more users send public messages that everyone can see.

According to TechCrunch, Viber’s API will soon be integrated with popular CRM packages to let businesses send/read customer support messages via Viber and see them alongside all of their other social media, email and messaging interactions.

Viber claims 800 million users and is owned by Japan’s Rakuten.

The 69.9-megabyte Viber app is available free on the App Store.