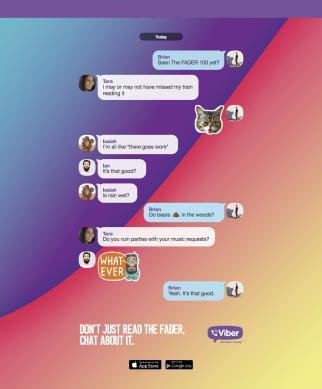 Facebook Messenger may be the biggest messaging app in the U.S., and Snapchat may be the buzziest, but a competitor that originated in Israel is hoping to give them a run for their money in the States.

The app, Viber, is targeting U.S. teens and college-age consumers in particular with a campaign themed “Chat,” positioning the platform as a place unlike social media, where small group conversations remain private. The effort is part of Viber’s first marketing efforts in the U.S., using the services of recent hires Droga5 for creative, Laundry Service for social media, Essence for media and Allison & Partners for PR.

The campaign is about “reigniting the good old fashioned conversation, at a time when everyone is constricted by character counts and worrying about ‘brand me’ in social media,” said Mark Hardy, global chief marketing officer at Viber. “We’re about the real conversations that happen in a protected environment.”

Messaging apps have been much more popular overseas, where higher costs to send texts have made them a popular alternative. WeChat, for example, says it has 600 million users, most of them in China. Line is most popular in Japan. And Viber has 44 million U.S. users and 660 million globally, according to the company, although it didn’t specify how active those users are.

Analysts, though, are predicting growth in the U.S. market, fueled in part by Facebook’s acquisition of WhatsApp and decision to make Messenger a standalone, but also by the sector’s ever-broadening services.

In addition to free messaging, voice calls and video, Viber offers a robust sticker market, games and Public Chats — a social network-like feature that brands often use to connect with consumers. More than a place to make free calls, Viber’s promise is a “mobile entertainment ecosystem,” according to Mr. Hardy.

Research for the campaign discovered that core Viber users — 16-to-25-year-olds, skewing slightly female — often felt that “this era of broadcasting yourself is kind of coming to an end,” Mr. Hardy said. After years of public social media activity, the thinking goes, some people are looking for a bit of a safe haven to talk to friends, where they don’t have to worry about their images or bullying.

“Messaging apps are around that private conversations with one person or a group of friends.,” Mr. Hardy said. “They are are where the users feel more comfortable, and that is the root of why the messaging app space is so vibrant right now.”

The campaign will include outdoor marketing and experiential efforts in New York, Boston and Miami, with the potential to roll out to other cities, and activations near college campuses along with local print. Some of the outdoor elements include posters highlighting group chats and features like being able to change the name of those chats. A print ad in music publication the Fader directly mentions the Fader, with the tagline: “Don’t just read the Fader. Chat about it.”

Vber is also enlisting influencers such as Snapchat “It Girl” YesJulz, who will appear in Miami for Viber, talking about the city’s nightlife and music, said Mr. Hardy.

In other efforts to appeal to younger people, Viber is working with artists like graffiti artist Alec Monopoly to offer more stickers, emoji-like images that are wildly popular overseas on many different apps and also highly lucrative for the companies. 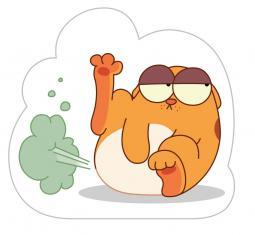 A digital campaign that involves retargeting will run for about five weeks.

Other recent efforts by Viber include a partnership with Spotify, in which users were asked to identify the “chatworthiest” track of all time. Users are prompted to share their answers on Viber, but also on other social networks.

Though the company declined to disclose the new campaign’s budget, the company is “investing well into the seven figures” in the fourth quarter,” said Scott Nelson, Viber’s North American head.

The company plans to expand the campaign to other markets after it reviews what was successful about the campaign and what could be improved.

According to Forrester, Facebook Messenger is the No. 1 messaging app in the U.S., in terms of the percent of smartphone owners opening the app at least once per month. Google Hangouts is next, followed by Snapchat, WhatsApp, Skype, GroupMe and Kik. Viber is No. 9.