From Skype to WhatsApp, there are plenty to choose from in the App Store for calling and group text apps. With a growing user base of more than 200 million, Viber is one app working to edge ahead of that pack.

Viber from Viber Media, Inc. is a group messaging and calling app that allows free calls with HD sound quality and group messages with up to 100 participants. Here is the full description:

With Viber, everyone in the world can connect. Freely. More than 200 million Viber users text, call, and send photo and video messages worldwide over Wifi or 3G – for free. Viber Out can be used to make calls to non-Viber landlines and mobile numbers at low rates. Viber is available for many smartphones and platforms. 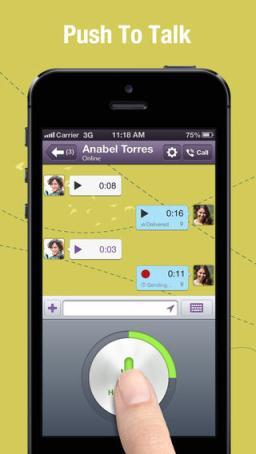 On Viber, your phone number is your ID. The app syncs with your mobile contact list, automatically detecting which of your contacts have Viber.

• Text with your friends • Make free calls with HD sound quality • Share photos, videos, voice messages, locations, stickers and emoticons • Groups with up to 100 participants • Download stickers from the Sticker Market, making messaging fun! • Push notifications guarantee that you never miss a call or message, even when Viber is off • Support for the Viber Desktop application on Windows and Mac

Viber has plenty of things going for it. It has been praised, especially for the ability to keep in touch over long distances internationally for a low cost with an added plus of an available desktop application. Calls, texts and photo or video messages are free over Wifi or 3G to Viber, and non-Viber, contacts.  You can keep Viber running in the background even after it’s closed to keep getting call notifications as it promises not to drain your battery. With in-app purchases you can customize your messages with various sticker packs.

Like many similar services, not everything can be free. There are charges when calling non-Viber contacts if not on a Wifi connection. There are also a few complaints about call quality, but some of that is to be expected. I did have a few hiccups when answering a call from Viber, such as the call dropping when trying to answer while unlocking my phone. Other than that it worked like a dream. I liked the layout better than the Skype app. It is more appealing and can be customized similar to chat options seen in Android phones. I also liked the Push To Talk feature for sending short voice messages, which especially come in handy when all you need is a quick question answered.

Viber is a helpful and full featured messaging app that could save you more than a penny or two. And the best part, it doesn’t bog you down with ads. Viber is available for free in the App Store and is compatible with iPhone, iPad and iPod Touch.