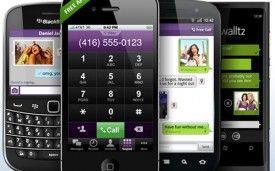 Previously, Viber was available for iPhone and Android phones, mimicking the default contact list and allowing users to send messages and call other Viber users for free.

Unfortunately, the freshly-launched betas do not support voice calls. For now, Blackberry and Windows Phone 7 Viber users can only message, which does include sending photos, texts and exchanging location information.

Viber also revealed some interesting stats about its app: It has more than 69 million global users, who send nearly 40 million messages per day and 1 billion per month. It’s growing by more than 200,000 new users a day, which makes it — Viber claims — the “fastest-growing mobile VoIP and messaging company.”