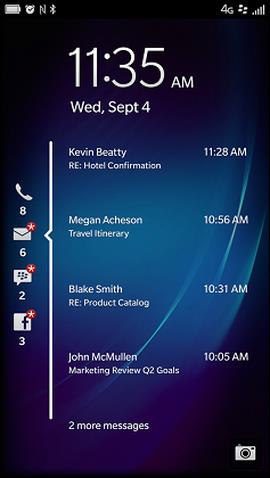 For BB10 users thinking about moving to an iPhone, there’s Apple’s iOS 7 Notifications Centre. It bears some resemblance to Hub, but wasn’t created with equal features.

One of the key differences from a BB10 perspective is that tapping on a notification in iOS redirects the user to a specific messaging app. BlackBerry users can respond to messages without needing to move outside of the Hub and can also view and edit their calendar entries. It’s a minor difference, but an important one for BB10 users due to the immediacy and efficiency it allows when responding to messages.

Interestingly, Apple did support posting on Twitter and Facebook directly from the Notification Centre in iOS 6, but Apple removed the feature in iOS 7.

iOS 7 also introduced new settings to control which apps appear in Today View and lock-screen notifications. Swiping notifications from the lock screen will launch the app to that message after unlocking.

BlackBerry introduced similar per app notification controls in Hub in the 10.2 update for BB10 as well as lock-screen notifications (pictured below) via icons on the lock screen, which, when tapped, presented a summary of messages. But it’s not possible to respond to anything directly from the lockscreen.

In pre-iOS 7 versions of iOS, multitasking was pretty limited. A double tap on the home button would bring up a tray of icons for open apps at the bottom of the screen. BlackBerry Flow’s multitasking improved on iOS at the time, but Apple went some way to address that in iOS 7, in which the double tap on the home button produces thumbnail snapshots of each app’s most recent state. But it’s still not BB10 multitasking and doesn’t allow the user to weave between apps in the way BB10 does.

It’s a similar story for Android. Notifications conveniently roll down with a downward swipe over messaging icons on the top of the screen but, like iOS, tapping on a message takes the user back to an app.

When it comes to Android though, installing aftermarket firmware is always an option. The developers behind custom ROM CyanogenMod built a Quick Reply feature in the Jelly Bean 4.1-based CM10, but that looks to have disappeared in CM11. 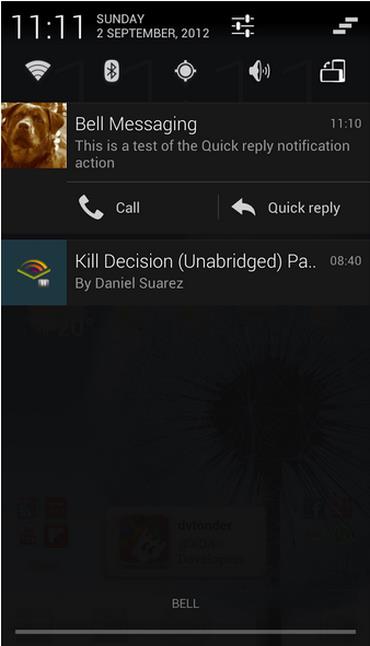 Android is often seen as the polar opposite to iOS, but compared with BB10, it’s actually quite similar, given how central the home button in accessing and interacting with apps. Of course, instead of Apple’s double-tap on home to do multi-tasking, Android has the dedicated multi-task button and the back button.

Fortunately, by the time many current BB10 device owners are ready to change, there will be another choice…