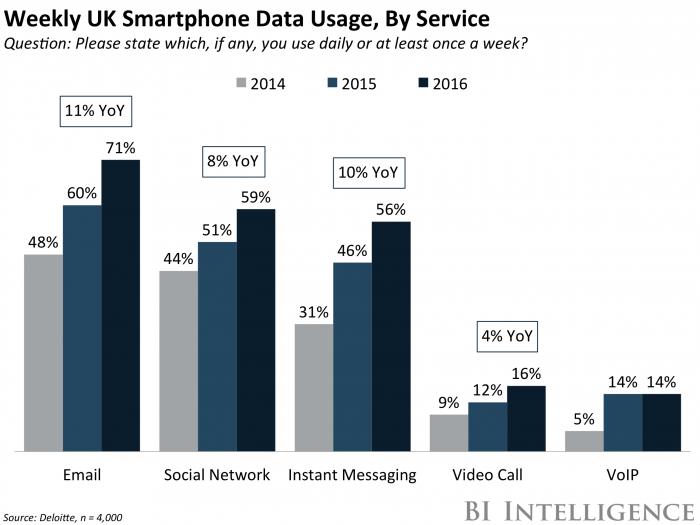 Google Assistant has a distinct advantage in language support

Smartphone users in the UK are calling each other less often, but they’re increasingly using other modes of communication on their devices, according to Deloitte’s Mobile Consumer Survey 2016: UK Cut.

About 31% of the 4,000 survey participants aged 18 to 75 claimed not to make any standard voice calls in a given week, a stark increase from the only 4% of respondents who said they didn’t make voice calls in 2012.

The results are reflective of the continuing global trend in users turning to over-the-top (OTT) communication modes to connect not only with friends and family, but businesses as well.

Voice calls are not being replaced by any single mode of communication. Rather, UK consumers are using a range of tools including e-mail, social media, instant messaging apps, and video calls at a growing rate. This shift has likely occurred for a number of reasons:

The move to other modes of communication is important for businesses to consider when wanting to reach their customers. Almost 90% of consumers globally want to use messaging services like SMS or chat apps to talk to businesses, according to a study commissioned by communications platform Twilio. However, just under half of all businesses that took part in the study are equipped to reach customers through messaging. Considering the growing use of these alternate channels, this failure to implement multiple B2C messaging strategies could hurt customer retention.

These trends have caught the attention of a wide range of businesses, publishers among them. News industry leaders including the Wall Street Journal, The Economist, and the BBC are establishing a presence on a number of chat apps in an effort to be out front and build an audience on the latest platforms where people are consuming content. These early adopters are experimenting to learn which chat apps work for their audience and how they can leverage chat for the distribution of digital content, including articles, images, surveys, and video.

BI Intelligence, Business Insider’s premium research service, has compiled a detailed report on messaging apps for publishers that looks at the appeal of these apps and how they’re becoming a dominant platform for media consumption. It compares the leading chat platforms, including WhatsApp, WeChat, Facebook’s Messenger, and Viber, and what features publishers should know about when thinking about how they might leverage these properties. It also looks at strategies for content distribution across chat apps and finally spotlights some of the challenges that publishers may encounter as they begin to dip their toes into content distribution via messaging apps.

Here are some of the key takeaways: