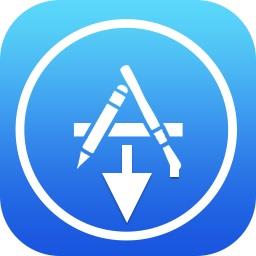 Did one of your favorite apps get deleted from an iPhone or iPad? We’ll show how to restore a deleted app in iOS, whether it was removed accidentally or intentionally. Many users don’t know this, but iOS apps can be restored and re-downloaded easily at any time, which means it’s no big deal if an app or two was accidentally deleted.

We’ll cover two easy ways to restore any deleted app on an iPad or iPhone, either of these work and they’re quite easy, you can search by app name if you know the app, or look through your download list to find the missing app that way. This is a great trick for everyone, but should be particularly helpful for parents and educators, when it’s pretty common for a kid to have deleted an app or two by accident. So, don’t freak out if you or someone you know accidentally deleted an app from an iOS device, because you’ll have those apps restored to the iPhone, iPad, or iPod touch in no time. Let’s get right to it and get those deleted apps back!

How to Restore Accidentally Deleted Apps in iOS by Name Search

Know the name of the app that was deleted and you want to restore? This is the way to go then:

Here’s an example where restoring the Angry Birds app after it was deleted, note it’s the Star Wars version that was removed and thus you must find the exact name match from the search list – easy enough. 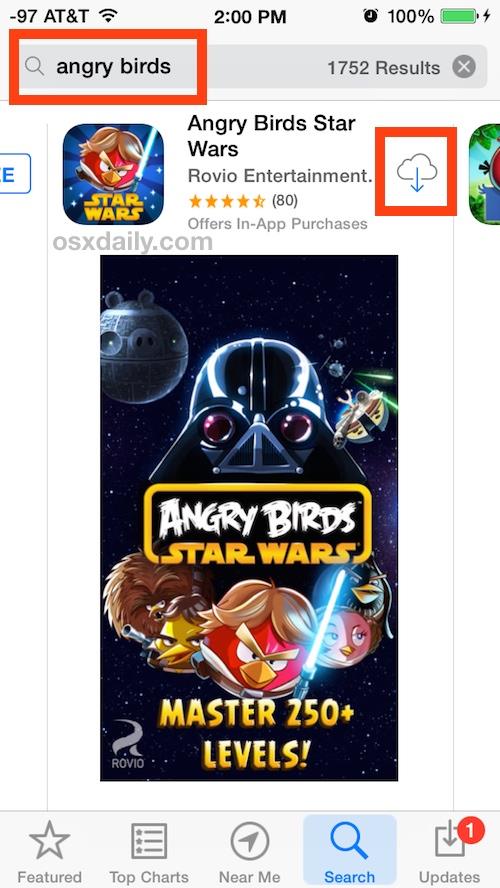 How to Restore Deleted Apps in iOS Through a Purchased List

Not sure which app was deleted, or maybe a bunch of apps were deleted? This is how you can see a list of all the apps that were downloaded to the iPhone or iPad, making it simple to restore what’s missing:

Note: the iPad can go directly to ‘Updates’, whereas the iPhone and iPod touch needs to tap the “Updates” button and then “Purchased” the difference here is due to the screen sizes of the devices. On the iPad, things look a bit different simply because there is more screen real estate available to display buttons.

The process is identical in all versions of iOS, though it looks slightly different (as well as the entire user interface for that matter) from the older versions of iOS to the most modern versions. Here’s what it looks like on a prior release before the major redesign: 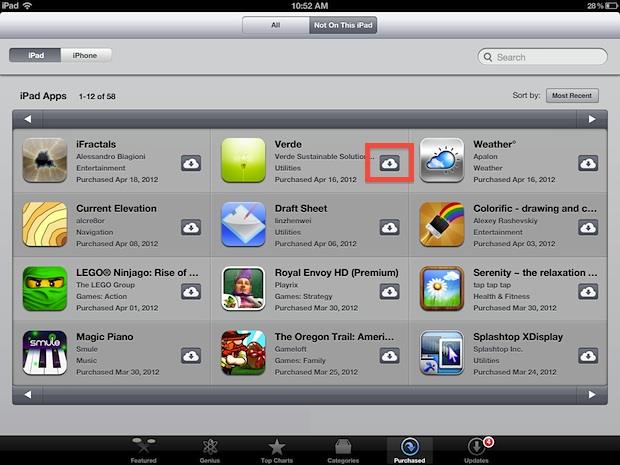 Whichever method you choose, the app will redownload and reinstall itself. You will not be charged for redownloading apps that you already own as long as the Apple ID is the same that was used to buy it in the first place. If you see a price tag rather than the download cloud button, that’s usually a good indicator that you’re not using the same Apple ID, and if you see a price listed on the app name you would be charged.

Worth mentioning is that iOS apps alone are not the only thing that can be recovered and redownloaded easily. This easy restore method will also work with iTunes Store purchases like music, movies, and TV shows, and on the desktop side of things, apps that were acquired through the Mac App Store as well.

Note: you must be using the same Apple ID to redownload the app without getting charged again. Of course, free apps are always free to download, but you won’t find them in your app history which is what this trick relies on.