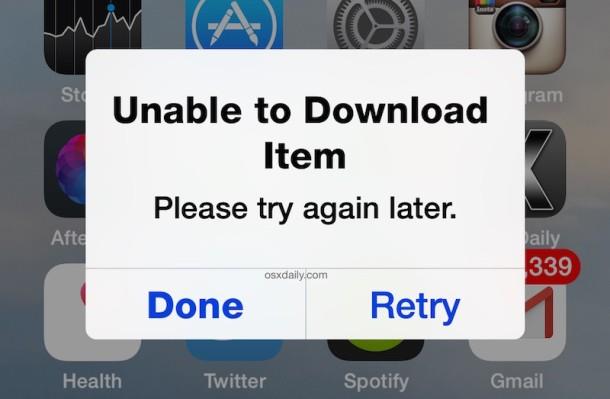 A somewhat strange error message can occur at random on iOS, typically for iPhone users, that states “Unable to Download Item. Please try again later” with a “Done” and “Retry” button options. The thing that makes this error message strange is that it appears at random and not after the user has attempted to download or update anything to the iOS device.

So what should you do if you get this error message on your iPhone or iPad at random, sometimes even repeatedly? Assuming you didn’t actually try to download anything (and if you did try to download something and got this message, simply check your network connection and try again – that should be the end of it), just tap on “Done” and it should go away, if you tap on “Retry” it can often cause the error message to keep returning over and over again. If you do immediately see the “Unable to Download” error message again, try the following:

That should be the end of the message, and you will likely never see it again.

There are a variety of attempted explanations for the Unable to Download Item message in iOS, most of which have to do with iTunes Match, iBooks, or the iOS Automatic Updates feature which downloads apps, music, and media, but turning off that feature may still lead to the message appearing. Some users were also able to narrow the error message down to the weird U2 album thing, but again that’s not consistent. The only thing consistent about this error message is that it’s not particularly consistent, which perhaps indicates that it’s more of a bug than much else.