Standing blindfolded in the middle of a field. In a distance a friend is shouting “I am here!”. You turn around till you hear the your friend best and start walking towards the sound. When there are two friends (with distinctive voices) and a map telling you where they stand you can even figure out about where you are on that map. This describes how a Non Directional Beacon (NDB) works.

But what if you want to know where you are and you have just one friend? Then the friend had to make knots in the ropes telling how far away you are. This describes how a VOR-Distance Measuring Equipment (VOR-DME) works.

Radio beacons enable Radio navigation and IFR taking away the need for visual landmarks. Navigation at night and at high altitude is possible. 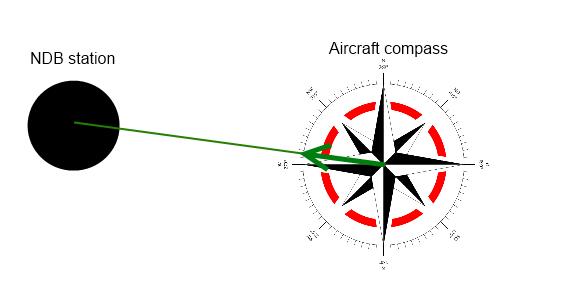 A Non-Directional Beacon (NDB) is the most basic type of radio beacon. The equipment on board of our aircraft will have to figure out where it is. Any (music) radio station is also a NDB. The typical frequencies of a NDB can be found on the AM Medium band (530 kHz to 1700 kHz) but during flight planning we shall discover NDB’s outside this range.

Very modern receivers can estimate the distance towards a NDB station by the azimuth towards the station.

The range of a typical NDB can be up to 75 NM. When using LFR the range can be bigger but less accurate. The higher the aircraft the longer the range.

The Low Frequency Radio Range (LFR) beacon is a directional beacon that operates at a frequency of 190 to 535 kHz, the long wave frequency and a bit above. Across the world there are plenty of NDB radio beacons in that range but they do not operate as LFR stations. The long wave frequency is known for it’s long range due to sky layer reflections but reflected signals are very unreliable for navigation.

There are two ways to figure out where the NDB is relative to the aircraft. Rotating an antenna manually until finding the direction of the strongest signal (loudest transmission) or have this done automatically (or electronically). The equipment (or person) to do so is called a Radio Direction Finder (RDF).

An ADF is not a radio station, is the the equipment on board of the aircraft to perform RDF automatically, the Automatic Direction Finder (ADF). Often NDB stations are called ADF stations but that is technically incorrect. 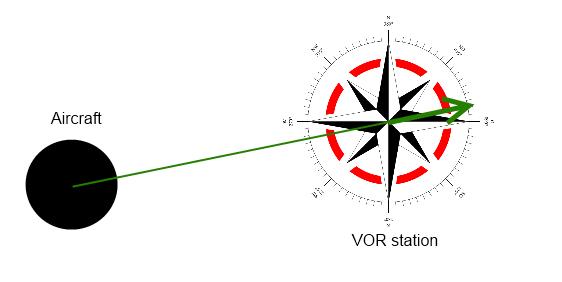 A VHF Omnidirectional Range (VOR) is a radio beacon that sends out a special signal making it possible for the receiving equipment to figure out the radial of the beacon. The heading (-line) towards the beacon is called a radial.

A VOR station is most often also used for communication (ATC) with the airfield. ATIS, ground, tower etc.

Very modern receivers can estimate the distance towards a VOR only station by the azimuth towards the station.

The beacon can be received mostly with a clear line of sight, but can also be received if obstructed, via various means: diffraction, trophosperic scatter, tropospheric ducting etc. The range depicted above is only orientative. In real life situations, radio signal propagation characteristics can expand or reduce the range.

Distance Measuring Equipment (DME) does not use the same frequencies as a VOR!. See | the wikipedia page for a detailed description. A DME tells the equipment on board of the aircraft the distance towards the station. There is two-way communication between the equipment on-board and the DME station to calculate the result.

An Instrument Landing System (ILS) beacon can be used as a NDB beacon (with some receivers) but it’s range is limited and depends very much on the position of the aircraft towards the station (and runway). The LOC signal of an ILS transmits only one radial, the heading towards the runway, in one direction. It should only be used as a system for landing and not for navigation. The glideslope component transmits a signal in the 300 MHz band, while the localizer is sharing the lower VHF (108-117.95 MHz) with the VOR’s. The localizer can also be used on the backcourse, if approved by local authorities, especially when a go-around maneuver is performed.

The military uses a slightly different system as the civilian version. The military uses something named TACAN that operates in the frequency band 960-1215 MHz overlapping the DME frequency range. It combines a VOR-DME and includes an azimuth feature that provides more accurate navigation.

Often the VOR-DME part of the TACAN is also made available for civilian navigation. If so, the beacon is called a VORTAC, but the use is as a normal VOR-DME, in the normal frequency range. The range of the beacon varies. Most have the same range as a VOR-DME but many will have different ranges. Sometimes the VORTAC defaults to a NDB-DME refusing to provide a radial.

Not a radio beacon, but a combination of them. On aeronautical maps there are fixes. Fixes are usually identified with a five letter code. Another word for a fix is Intersection. A fix is a place that is crossed by two or more easy radials from a VOR or bearings from a NDB, some fixes are on a radial of a VOR-DME and a specific distance. Typically the easy bearings are 45 degrees intervals on a compass rose, but there are plenty of fixes that use other intervals. It is sometimes a bit of guessing what beacons should used for a fix, most often it’s the two nearest ones.

Runways used to have three vertical directed radio beacons in-line with the runway to aid landing, the marker beacons. It was often combined with the ILS

Distance from runway varies a lot. On many airfields the markers have been replaced with an ILS and/or VOR-DME. The outer marker is sometimes combined with a NDB.

An airway is a predefined flightpath. It is composed like a normal flightplan of legs between VOR, NDB and fixes. Most airways are in controlled airspace. Airways have names and make the creation of a flightplan easier. For a flightplan only the legs towards and from the airway have to be defined.