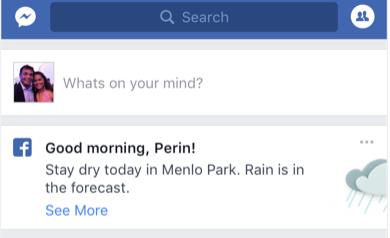 With even more iPhone rumors (stretchy screens and touch-sensitive backsides, anyone) and more bizarre robots than we can keep track of, you may have lost track of some of the best new apps.

Luckily, we’re keeping score for you for you. Each week, we round up the latest app news, along with a few of our favorite new and updated apps, to keep you in the loop with everything coming to your phone.

Here’s what we were following this week.

Pinterest wants to make it easier for you to buy stuff. The company introduced a new set of visual search features, including one called “Lens” that lets you shop for products based on photos you take with your smartphone.

Facebook launched its own weather feature, allowing you to see local forecasts without ever leaving the main Facebook app.

Twitter is trying to fix its abuse problem. Again. This time the network is cracking down on repeat offenders, introducing a new “safe search” feature and filtering out “low quality” replies in users’ feeds. Speaking of Twitter, all those broken replies on Donald Trump’s tweets are apparently caused by a longstanding bug.

Also, Miranda Kerr, fiancé of Snapchat CEO Evan Spiegel, is really, really not happy with Facebook. In a recent interview, she panned the social network for copying Snapchat’s features. “When you directly copy someone, that’s not innovation,” she said.

WhatsApp officially added two-factor verification to its app, which prevents anyone from activating your phone number without a six-digit passcode. It’s not perfect, but a lot more secure than not using it.

Viber has added disappearing photo messages to its lineup of features so you can keep (some of) your chats extra private.

Going to the dogs…

When you’re at a party but you miss your dog too much so you have to Houseparty pic.twitter.com/XXcCRdFSHz

Remember video chat app Houseparty? Apparently the Meerkat founder’s new app is really popular with dog owners, who are apparently using it to “hang out” with their pups.

Also, Mashable got the first look at WeRateDogs, a new adorable dog-themed endless runner that’s out now on iOS and Android.

Would you choose a date based on their brainpower? Cue Sapio, which aims to help like-minded intellectuals find love.

DJ Trump: A new app from two Harvard students lets you put words in Donald Trump’s mouth — literally. Just enter text and the app splices together clips of his voice to create your own custom Trump message.

BONUS: Someone invented an iPhone case that doubles as a phone charger