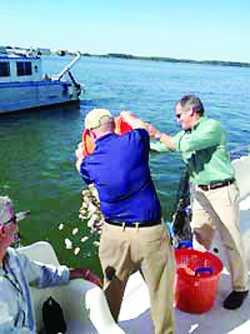 It’s time to celebrate a huge success in oyster reef restoration efforts. Five years after targeting Harris Creek as the first of three oyster sanctuaries, a new reef is thriving thanks to $27.5 million in funding from federal and state agencies and other partners to pay for reef substrate, oyster spat and the planting of the oysters.     That’s the news from Stephanie Westby, who serves as the National Oceanic and Atmospheric Administration’s coordinator for oyster restoration in the Chesapeake. ­Westby told the Severn River Association that 350 acres of new reef — planted with more than two billion oysters — is thriving in Harris Creek.     NOAA, along with federal agencies and the Chesapeake Bay watershed states, are charged under the 2014 Chesapeake Bay Agreement to restore oyster populations in 10 Chesapeake tributaries by 2025. To do its part, Maryland picked Harris Creek, Tred Avon River and Little Choptank River, all on the Eastern Shore, to reestablish oyster reefs. Harris Creek is the first to reach the critical three-year mark to see if the oysters reach maturity.     They are! More than half of the first 100 acres of reefs planted with juvenile oysters in Harris Creek have densities of greater than 50 oysters per square meter. “This is a remarkably high density for oysters in the upper Chesapeake,” Westby said.     Pictures and video taken of the Harris Creek oysters during last winter’s unusual clear water reveal thriving areas of oysters forming the first layer of what will hopefully become an entrenched, thriving reef. Careful management of the reef is critical now as oysters in Maryland waters can go as long as 10 years between good reproductive events. See http://tinyurl.com/HarrisCreek     This success is just a beginning. Westby noted that despite the success in Harris Creek, the oyster population in the Chesapeake Bay is still barely one percent of historic levels. Far more restoration work is needed before the Bay states can achieve their goal of restoring oyster populations in 10 tributaries by 2025.