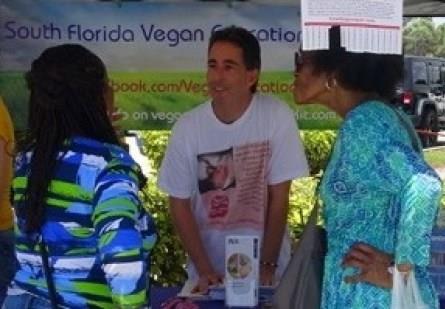 Vegan Education Moment of the Day

Whole Foods Checkout Person (WFCP) seeing my purchases: Are you vegetarian… or are you vegan? Me: Vegan. WFCP: How long? Me: 12 years-ish. WFCP: Why did you go vegan? Me: Ethical reasons. I don’t believe my life is more important than someone else’s and won’t participate in the enslavement, exploitation and execution of innocent beings just to satisfy my pleasure.  Are you vegan? WFCP: No…  I was pescetarian, then I was vegetarian.  I was almost vegan, but then one Thanksgiving… Me: You decided that it was ok to have others die for you  ? WFCP: Kind of.  I feel guilty a lot of the time. Me: Of course you do.  If you want to stop feeling guilty, you can make different choices and choose to live vegan.

There wasn’t any more time to talk in the checkout line, but I went to the car and brought her back an Embracing Veganism, our business card and a Respecting Animals brochure from International Vegan Association and told her that we’re available to answer any questions and offer her any support she needs in living vegan.

Considering the short amount of time allowed in this situation, I felt this was a good way to answer her question and give her information.  Shortly afterward, however, a sense of dissatisfaction began to creep in at how I handle such interactions generally and I began asking myself how I might better answer the often-asked question, “Why did you go vegan?”  My usual impulse has been to make some grand proclamation and hope that it will somehow be relatable and make an impact on my interlocutor… but I’m rethinking this strategy.

Since I’m finding it very effective lately to use a version of the Socratic method (a dialogue technique that “uses creative questioning to dismantle and discard preexisting ideas and thereby allows the respondent to rethink the primary question under discussion”) in some areas of my vegan advocacy, I asked myself whether the same method might be equally effective here.  The answer seems to be, it would.  After all, human nature seems to dictate that people will believe the words coming out of their own mouths before trusting and believing information presented by strangers, especially when that information appears on the surface to run counter to their established beliefs.  Consider this encounter I had a while back with a non-vegan who expressed all-too-familiar protein “concerns”:

In the past, I would have heard the protein question and took it as an invitation to leap into a verbal dissertation involving everything I know about protein, amino acids and human health, which might serve to either educate or confuse the listener or, worse, trigger a defensive cognitive dissonance response since the barrage of information I’d be presenting would most likely fly in the face of everything they’d been taught by people and organizations they trust.  In this case, instead, I chose to ask the questions that led my interlocutor to draw her own conclusions and find her own answers (which were, of course, the ones I’d hoped she’d come to!) and, once that had happened, I gave a brief Protein 101 discourse just to reinforce matters.  As I strongly believe should be the case with every discussion about veganism, I brought the idea of ethics into the conversation to avoid reinforcing the erroneous idea that veganism is merely a diet as opposed to a fundamental matter of justice. 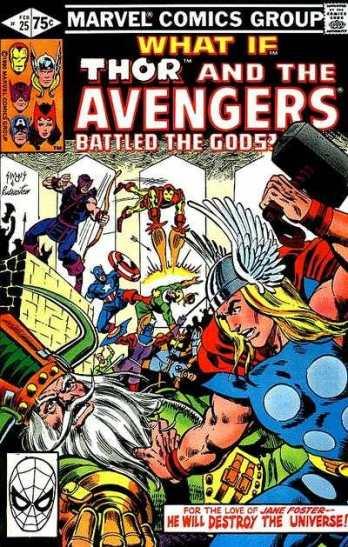 When I was a kid, one of my favorite comic book series was called “What If?”  Each issue would present “…an event in the mainstream Marvel Universe, then introducing a point of divergence in that event and then describing the consequences of the divergence.”  So, imagine if my interaction with the Whole Foods Checkout Person had gone like this:

WFCP: Why did you go vegan? Me: Great question!  To best answer it, let me ask you three questions: do you believe it’s wrong to cause unnecessary harm and death to animals? WFCP: [likely response] Yes.* Me: Great!  So do I.  Did you know that eating and otherwise using animals and animal products causes unnecessary harm and death to animals? WFCP: I hadn’t thought of it that way, but yes, that makes sense.* Me: And that’s why I’m vegan – because it’s wrong to enslave, exploit and execute vulnerable individuals, regardless of species membership, race, gender, age or any other arbitrary criterion, to satisfy human pleasure, comfort and convenience and all of that involves unnecessary harm. WFCP: Thanks!  So, what’s the third question? Me: Glad you asked!  Did you know that the answer you gave to the first question indicates you already agree with the principles of veganism? WFCP: Huh.  I guess I do!*

*Of course, this is an oversimplified example showing the best possible responses to our questions and will not always be the ones given since people tend to want to debate these issues due to deeply held beliefs born of a lifetime of cultural indoctrination into speciesism.  Vegan advocates should always be prepared to explore related topics that arise in conversation such as “How do you define ‘unnecessary‘?” and “What constitutes ‘harm‘?”.  There are excellent and informative abolitionist vegan websites listed at the end of this essay (more can be found in the Online Vegan Resources section of our main website at www.VeganEducationGroup.com) that can help us educate ourselves and to which we can direct both non-vegans and vegans for solid, unequivocal vegan information. 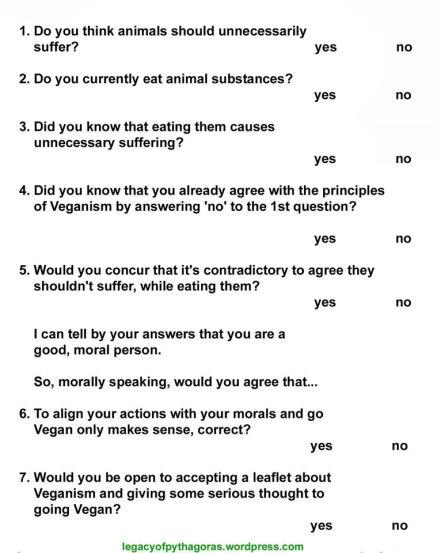 By going this route and asking specific questions, the non-vegans with whom I speak (and this includes vegetarians and other fill-in-the-blank-atarians) not only hear my reasoning for why I live vegan, but in the process also explore their own beliefs and come to understand that they, too, tend to agree with the ethical and moral principles of veganism.  The idea that they are curious enough to ask such a question indicates a willingness to learn, at the very least, one person’s reason(s) for living vegan and, better yet, may indicate their own willingness to explore these ideas further and hopefully incorporate them into their lives by making the choice to live vegan.

Sadly, there is a plethora of individuals and groups that, intentionally or not, dilute and confuse the meaning of veganism to the point that it is often mistaken for a diet, a fad, a lifestyle or a trend.  For those of us who take unequivocal vegan advocacy and education seriously, it is imperative that we properly define veganism for those who don’t understand what it is, and it makes sense to keep questioning our advocacy methods and adapting where necessary to steadily evolve into the most effective agents of change we are capable of being.

[I encourage all readers to click the blue links embedded in this essay and explore the information on those sites.  The podcasts and essays connected to those links will help to expand on the ideas presented here.]