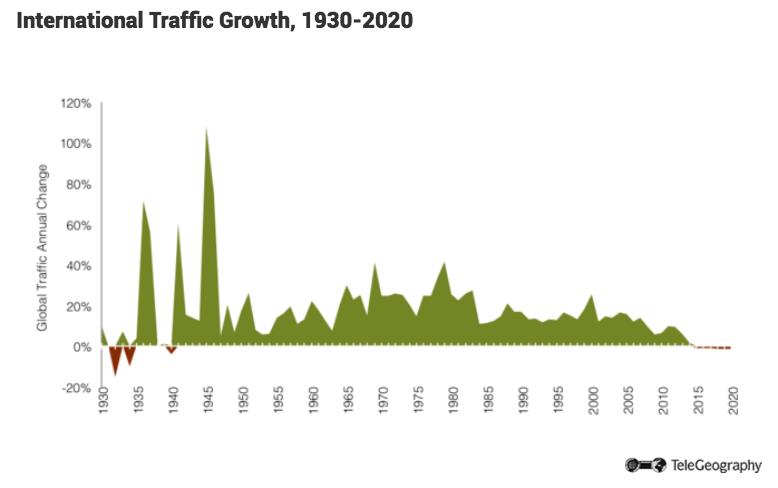 With the TeleGeography Report hot off the press, it seems that there are more than a few good stories nestled in this year’s data.

First up is the curious discovery that 2015 marked a turning point in the market. It was the first time since the Great Depression that international carrier voice traffic declined.

A little context: in the 1930s, the decline in traffic was due to macroeconomic circumstances. Growth resumed as the economy recovered.

But this recent decline in traffic may reflect a permanent, structural shift: the mass adoption of new “over-the-top” communications services that are reshaping the international communications market. While Skype dominated the OTT market on computers, it’s hardly the only game in town. Consumers now have a range of smartphone-based communications apps like WhatsApp, Facebook Messenger, WeChat (Weixin), Viber, Line, KakaoTalk, and Apple’s Facetime.

This recent decline in traffic may reflect a permanent, structural shift: the mass adoption of new “over-the-top” communications services.

Both WhatsApp and Facebook Messenger topped 1 billion monthly active users in 2016, and WeChat is not far behind, with 846 million users in September 2016.

Another interesting nugget from the TG report is our estimate that six popular OTT communication apps (WhatsApp, Facebook Messenger, WeChat, Viber, Line, and KakaoTalk) combined for over 4.4 billion monthly users in June 2016, an increase of 800 million from June 2015, and up nearly threefold from June 2014.

What does it all mean? Well, the experience of the past century has shown that demand for cross-border communications is almost limitless. Between 1983 and 2007, international phone traffic grew at a compounded rate of 15 percent annually. Traffic grew an even faster 21 percent CAGR between 1927 and 1983!

Consequently, it’s hard to believe that the recent decline in traffic means that people have suddenly begun to lose interest in communicating with friends and family abroad. Instead, it might simply suggest that they are increasingly turning to other means of keeping in touch. 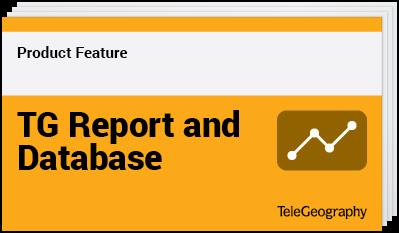 Interested in what’s happening in the international voice market?

Get the scoop on the report and database used to write this story, peruse free samples, and connect with our team about getting your hands on the TeleGeography Report and Database.