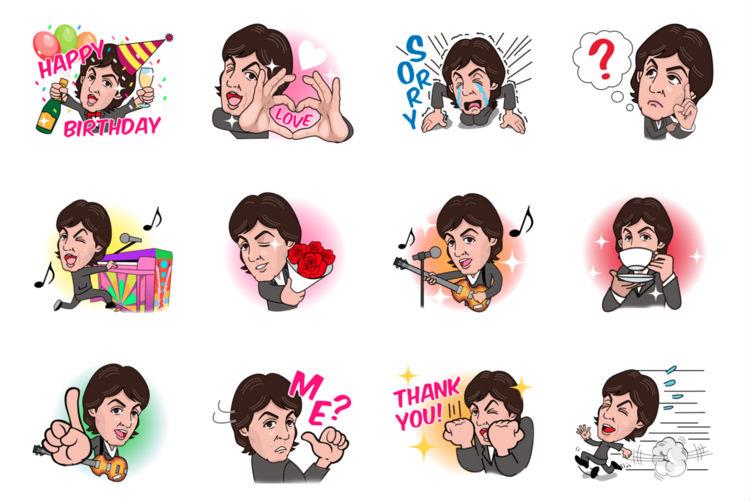 Emojis are fine if you want to show how you feel in a text, but imagine if you could have a celebrity character do the emoting? For those familiar with the big-in-Japan messaging app Line, digital sticker packs are omnipresent — and some artists want to be part of your conversation.

Major Lazer recently announced a free batch of digital stickers for Line — when downloaded, users can paste them in conversations like emojis. Major Lazer’s stickers, which are available until June 12, feature characters from the group’s animated TV series of the same name.

Fall Out Boy also have a free line of Line sticker packs, and Paul McCartney previously launched a pack that features a cartoon Macca saying things like “Happy Birthday” and “Good Night,” or throwing gestures like a thumbs down or an angry face. The icon’s pack of 40 stickers costs .99 cents in the U.S.

Despite its popularity and dearth of stickers, Line has struggled in the last year to grow outside its core markets of Indonesia, Japan, Taiwan and Thailand, which account for roughly 67 percent of the company’s monthly active users. In January it announced that it had ended 2015 with 215 million MAUs, up from 181 million a year before.

Notably, though, is Line’s status as one of three major music streaming services in Japan, a market dominated by the compact disc. That these artists are trying to capitalize is hardly surprising.

Another popular messaging and video app, Viber, has announced a contest to design stickers inspired by two festivals: Exit and Sea Dance. Organizers say the goal of the “My Exit Adventure” Viber sticker design contest is to “reach creative minds throughout the world and see their take on the Exit Adventure package and its unique ethos and festival lifestyle in the form of compelling Viber stickers that can be used in chats.” A jury will pick one grand prize winner, who will receive $3,000 and have their designs turned into downloadable digital stickers on VIber.

“We are looking for creative stickers that capture the energy and vibe of Exit, but are also relevant to people beyond the festival,” said Viber creative director Erez Shocher. “The more useful the sticker, the more popular it will be, so think about the types of stickers and phrases that you like to use with your friends every day. The selected sticker designs will combine that practicality with the unique ethos of EXIT Festival.”