The International Phonetic Alphabet (IPA) is an alphabetic system of phonetic notation introduced in the late 19th century by the International Phonetic Association (also IPA). It is a standardized representation of the oral components of language: phones (any distinct speech sound), phonemes (units of sound that distinguish one word from another), intonation and the separation of words and syllables. Thus, an IPA Transcription is a language-neutral visual representation of the sounds we produce in our speech. In other words, IPA shows you how to say things. More importantly, perhaps, is that it shows you how to say things correctly.

Anyone that is learning a foreign language knows that one of the more difficult things to “get over” or acquire is an accent. It is natural to be a little embarrassed when having pronunciation corrected by a native speaker, or when asked the infamous question:

“Oh, you have an accent, where are you from?”

In my case, I often get a lot of weird looks whenever I speak Spanish due to the fact that I speak with a Castilian accent, since I learned from Spaniards in high school. This was especially difficult at first due to the subtle phonetic changes from my native tongue (English), which made words like “especialización” [es̺.pe.θ̯ia.li.θa.’θi̯on] a challenge to get just right. Likewise, non-native English speakers can have a lot of difficulty with sound distinctions like “ship” and “sheep”, different dialects of the language, and fluid production of syllables and phonemes like the schwa. It wasn’t until I could actually see these nuances and understand how they are produced that I could start correcting these errors in my speech. Since learning IPA I have a seen an incredible difference in my pronunciation and language skills, and best of all I can extend this to any other language I study.

So, why should you learn IPA?

Because it is a unique way to double-check pronunciation and study language, and also serves as an entry into the field of linguistics. Understanding how the chunk of meat in our mouths works allows us to control it to our benefit, whether that be getting rid of an accent, figuring out how to pronounce that weird new phoneme, fine-tuning your speech or teaching others how words are pronounced. It is worth the effort, I assure you!

Some Background Knowledge to Get You Started

Three key concepts to understand IPA are manners of articulation, places of articulation, and voiced/unvoiced distinctions. These are markers depicting where and how our tongue moves when producing a sound, and whether or not our vocal cords are vibrating. IPA symbols are classified using these concepts, which serve as a road-map for our production centres to pronounce the sound correctly. For example, the th sound which distinguishes Castilian Spanish is classified as an unvoiced dental fricative consonant [θ]. This tells us three things: our vocal cords should not be vibrating (unvoiced), the tip of our tongue is touching our teeth (dental), and the air leaving our mouth is not obstructed (fricative) as it would be with stop consonants like [b]. In other words, it can be extended. Vowels have their own distinctions, which are close-open, front-mid-back, and rounded/unrounded. For example, the close back rounded vowel [u] is produced with a closed mouth near the back of the production center (closer to the throat than the teeth), and rounded lips.

Now, I realize this is a lot of new and confusing stuff being thrown at you, so I’ve included a pair of charts to help you visualize these concepts. The first is a labeled diagram of the places of articulation, and the second is a vowel chart. 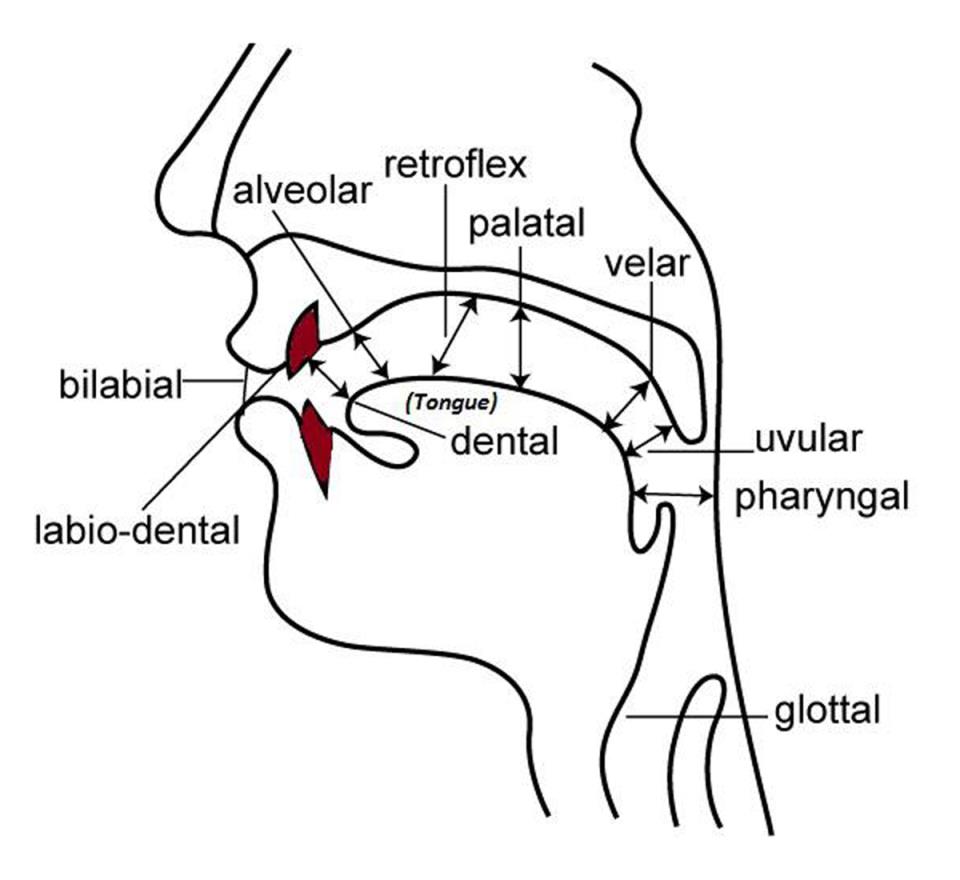 Also, here is a link to a complete IPA keyboard. You can mouse over any of the symbols to see their classifications.