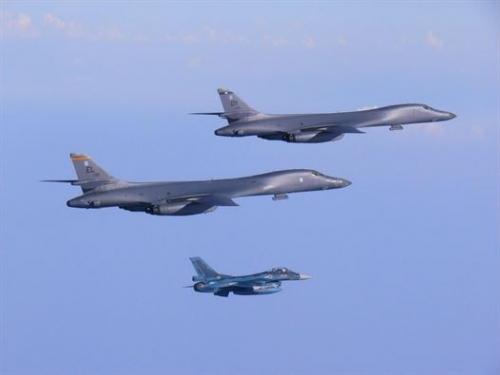 Less than a month after the US flew two B-1B bombers over the Korean Peninsula to show off “US attack capabilities”, the US Air Force did it again on Sunday, when it the flew two supersonic B-1B bombers over the Korean peninsula in “a show of force” on Sunday after Pyongyang’s Friday test of an ICBM that can reach the continental US. The two B-1Bs flew alongside two Japanese F-2 jet fighters within Japanese airspace before conducting an exercise over South Korea with four South Korean F-15 fighters in response to the latest North Korean missile test, as well as the previous July 4 launch of the “Hwansong-14” rocket, the USAF.

“In a demonstration of ironclad U.S. commitment to our allies, two U.S. Air Force B-1B Lancers assigned to the 9th Expeditionary Bomb Squadron, deployed from Dyess Air Force Base, Texas, fly a 10-hour mission from Andersen Air Force Base, Guam, into Japanese airspace and over the Korean Peninsula” the statement by Pacific Air Forces Public Affairs said.

“If called upon, we are ready to respond with rapid, lethal, and overwhelming force at a time and place of our choosing”.

The U.S. has in the past used overflights of the supersonic B1-B “Lancer” bomber as a show of force in response to North Korean missile or nuclear tests, most recently on July 8, although the “deterrence” of such drills leaves much to be desired.

North Korea through its state media often complains about flyovers by B-1B bombers, calling them rehearsals for a nuclear strike. On Saturday, the two B-1Bs took off from Andersen Air Force Base in Guam, flying alongside two Japanese jet fighters within Japanese airspace before conducting an exercise over South Korea with four South Korean jet fighters. 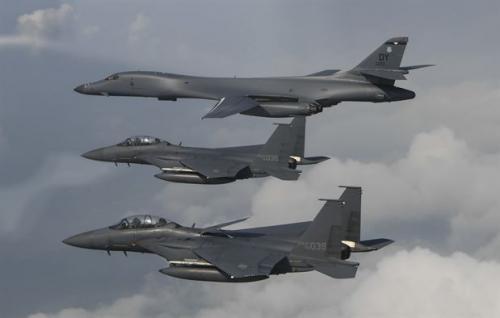 As reported on Saturday, North Korean leader Kim Jong Un personally supervised the midnight test launch of the missile on Friday night and said it was a “stern warning” for the United States that it would not be safe from destruction if it tries to attack, the North’s official KCNA news agency said adding that “all of the US is now within North Korean ICBM range.” North Korea’s state television broadcast pictures of the launch, showing the missile lifting off in a fiery blast in darkness and Kim cheering with military aides. 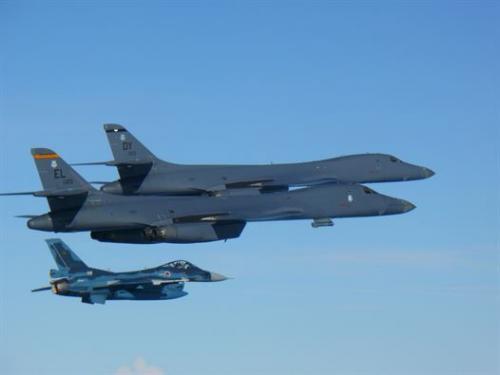 In a message on Twitter, he said: “Our foolish past leaders have allowed them to make hundreds of billions of dollars a year in trade, yet they do NOTHING for us with North Korea, just talk. We will no longer allow this to continue. China could easily solve this problem!” he tweeted.

At the same time, Japanese Foreign Minister Fumio Kishida, meanwhile, held telephone talks with US Secretary of State Rex Tillerson. Both reportedly agreed on the need to put “the heaviest possible pressure” on North Korea, AFP reported. “We confirmed that we will closely cooperate in adopting a fresh UNSC (UN Security Council) resolution, including severe measures, and working on China and Russia,” Kishida told reporters.

In a Sunday statement, North Korea said it had been forced to develop long-range missiles and nuclear weapons because of hostile intent by “American imperialist beasts” looking for another chance to invade the country.

“If the United States sticks to its military adventurism against us and super-intensive sanctions schemes, we will respond with stern action of justice as we have already declared,” North Korea’s Foreign Ministry spokesman said in a statement on Sunday, KCNA reported.