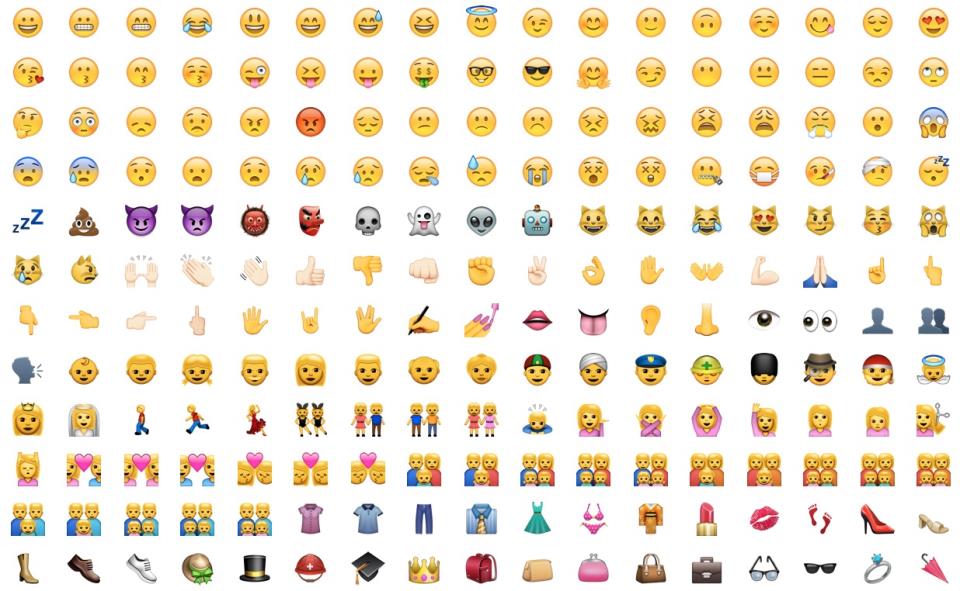 What does this emoji mean? I’ve found myself asking this question several times because not all of them are always explicit. The emoji with two hands together, for example. Is it two people high fiving each other? Or is it someone praying? As I said, it’s not always obvious. If like me you’re sometimes in doubt about what an emoji means, we’ve put together a few tips that will help you get an answer.

How to find out what an emoji means on your Mac

There are a couple ways to find out the meaning of an emoji character on your Mac.

The first way is pretty basic:

Step 1: In the Messages app on your Mac, click on the smiley face to bring up the emoji keyboard.

Step 2: Search the emoji for which you want to learn the meaning.

Step 3: Hover your mouse over the emoji character and after a couple seconds, you should see a little popup with the description of that emoji. 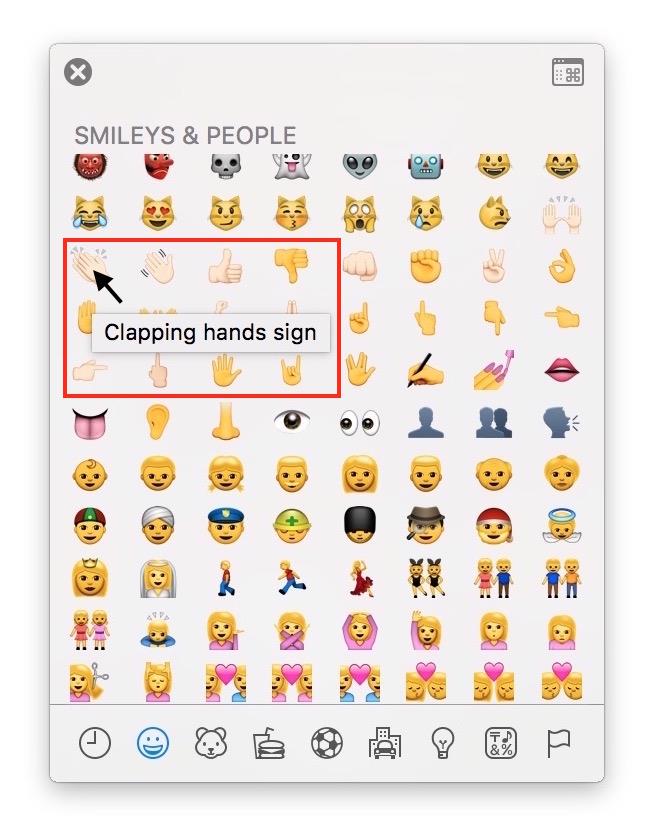 The second way is for the emoji connoisseur:

Step 1: In any application, go to the Menu Bar > Edit > Emoji & Symbols. As an alternative, you can use Control + Command + Space on your keyboard. This will bring up a window with all the characters present on your Mac.

Step 3: Search for the emoji you want to get the meaning for, and click on it to select it.

Step 4: On the right hand side, you will be presented with the translation of that emoji. 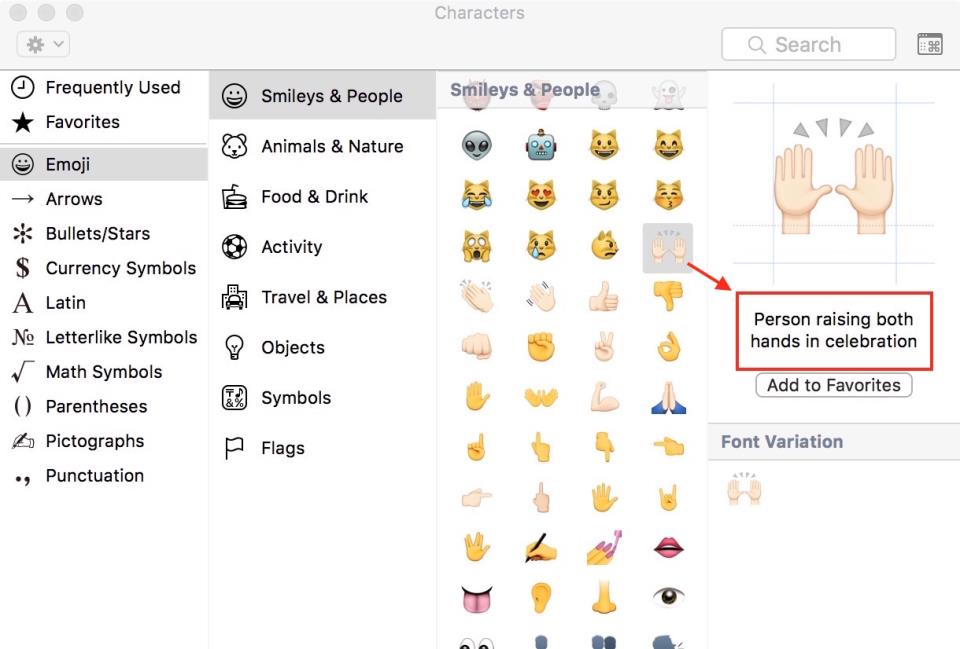 Find out what an emoji means on your iPhone

If your Mac can tell you the meaning of an emoji character in a very straightforward manner, it is not quite as simple to replicate on your iPhone, iPad, or iPod touch. Indeed, we’re going to have to use an accessibility feature in order to trick iOS into speaking out loud the definition of the emoji.

Step 1: On your iPhone, iPad, or iPod touch, go to Settings > General > Accessibility > Speech, and turn on Speak Selection.

Step 2: Create a new email or note, and insert the emoji character for which you want the definition.

Step 3: Tap to select the emoji and select “Speak…” from the menu. Siri will then speak to you the meaning of the symbol. 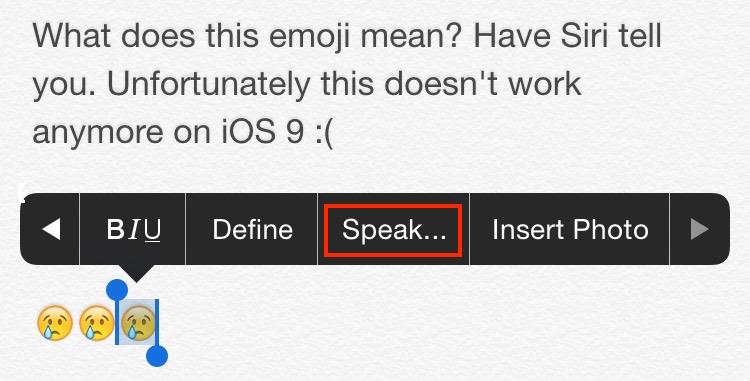 Use an emoji dictionary app

I am sure there are dozens of apps in the App Store that do just that, but one of the most simple ones appear to be Emoji Dictionary, which is available for free. Download the app and browse for your favorite emoji to get its meaning. Unfortunately, this app hasn’t been updated since January 2015, so its catalogue of emoji characters is a bit outdated. For instance, it doesn’t include the latest emoji symbols found in iOS 9.1. 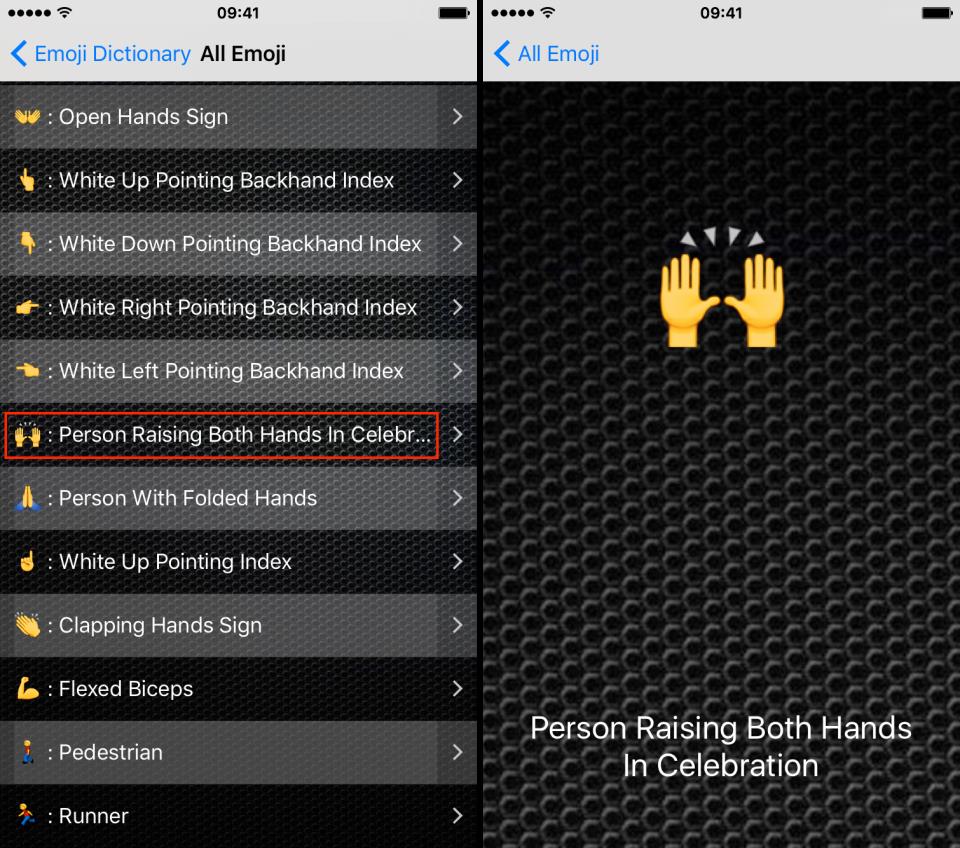 Emojipedia is to emoji characters what Wikipedia is to global knowledge. The website catalogues every single emoji available and shares more details about each of them. This is definitely the ultimate reference for emoji symbols, but it could be a little overkill if all you’re looking for is a quick definition of an emoji.