Viber is one of the best messenger apps to ever make way on iOS. There have been improvements in the form of new versions since its release and Cydia tweaks have also made an attempt to enhance its functionality. Viber recently released a desktop version of its messenger app which further goes to show its popularity among users and cross-platform compatibility.

There are some limitations, however, such as the app doesn’t allow you to change your status more than once in a particular day. If you’re an iOS user who’s looking to bypass this barrier, a new jailbreak app that goes by the name ViberOnlineStatusUnlimit may just be what you’re looking for. After downloading and installing the tweak, a new icon is created on the Springboard while the Settings get a new menu for the tweak. There’s only one toggle in the Settings which can be used to make the tweak active or inactive. That’s all that is required and you don’t need any other complicated functions or configuration to make the tweak work. 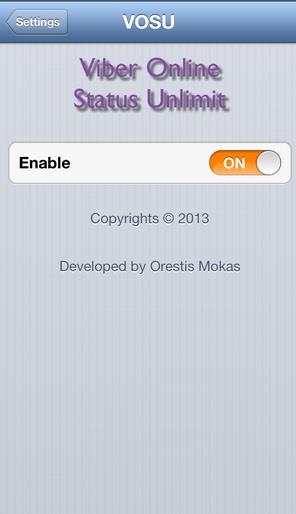 After enabling the tweak, the device doesn’t even have to be respringed. You can see the tweak in action by enabling it under the More tab in the Settings menu. If you do everything correctly, a pop up notification is going to appear saying ‘you can now change the last online setting. Turn it on now?’.

Perhaps the best feature apart from the main functionality of the tweak is that there are no ads within the jailbreak app. You’re only asked if you want to donate to the developer, and if you don’t want to, you can just select cancel to move on.