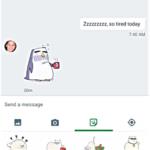 Google Hangouts is very popular messaging app best known among Android users. It comes as a default messaging app on Google Nexus devices and can be used also for sending and receiving SMS.

Hangouts from Google is compatible with Android and iOS devices. If you are using Google Chrome you can also install app on your Windows PC or Mac. Currently, there is no version which supports Windows phones but you can use web-based version which works just fine.

The good vs. the bad

User interface of Google Hangouts is easy to use in general. If you are using Android you can access incoming messaging from shortcut on homescreen. Writing messages is easily accessible and app has nice materialistic design. 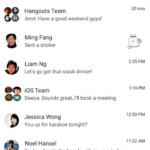 Although Google Hangouts will suits the best mostly to Android users, it is still a decent messaging apps. Its advantages are mainly group chats, video calling and one platform for messages as well as sms. If you aren’t using Windows phone, definitely give it a try.