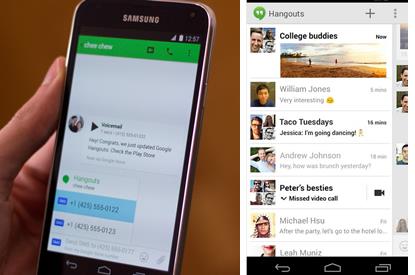 It’s been ages since Google last touched its Google Voice unified phone number service — remember that? — but that finally changed this week. Now you can now see or hear your Google Voice messages and make free calls over WiFi in the Google Hangouts group chat app for Android — and soon for iOS devices.

You can now call other Hangouts users for free over WiFi, but like all other voice-over-Internet (VoIP) apps, charges apply if you call non users. You can also make Hangouts calls over your cellular mobile network instead of WiFi, but unless you have an unlimited data plan, you’ll be potentially using up a lot of data.

When you call or text from Hangouts, it will use your Google Voice number, and all of your incoming GV calls and texts will go to Hangouts as well. If you get a voice mail, you’ll see it as the latest part of your Hangouts conversation with that person, including Google’s transcription and the audio playback option. If you get a text message to your GV number, you’ll see it in a Hangouts conversation with your GV number next to it.  And if you’re at your desktop computer, you can see all of your messages in your desktop Hangouts extension.

Version 2.3 of Hangouts also adds a completely new interface, but some users are complaining that key features are now gone or still missing, like swiping back to the inbox, swiping to archive, mass-deleting conversations, and syncing the right contact pics. And ironically, Google Hangouts still has no conversation search feature.

You can install Hangouts 2.3 — including the Hangouts Dialer app — on Google Play and in Apple’s App Store. To use the new calling features, you also have to install the separate Hangouts Dialer app, which is currently available only for Android. Google says voice calling will be coming to iOS in the coming days. 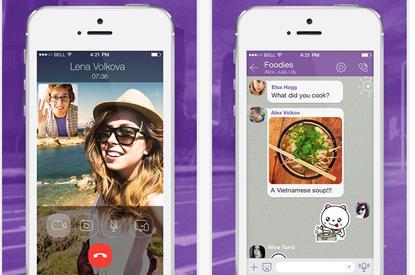 Viber is taking on Google and Skype with the addition of video calling to version 5.0 of its iOS and Android apps. You can make or receive free video calls to other Viber users over WiFi, or use mobile data if you’re out of WiFi range — just make sure you have plenty of data on your wireless plan. You can also transfer calls between the mobile and desktop apps.

Note that if you’re on Android, Viber’s video calling only works on Android 4.0 or higher.

Besides adding video calls, Viber for Android and iOS also now also lets you scan a QR code to add a contact or call a number. This could be a real time-saving feature if QR codes continue to catch on. Viber’s iOS app now makes it easier to forward photo messages.

Viber’s updated Android app now features an updated design, although some users are complaining that notifications have been removed for sent, delivered, and read messages. Other users note that even if you are using headphones, the app will put your call on speaker during the short time between placing the call and starting the video. Hopefully Viber will fix these issues in its next update.

The company also refreshed its desktop apps for Windows, Windows 8 and OS X with an updated design, new features, and bug fixes.

Viber also recently launched for the less popular Windows Phone and BlackBerry platforms, so we’re guessing that those apps will also get video calling by next year.

You can download Viber 5.0 for iOS from the App Store and Viber for Android from Google Play.

Viber was acquired in February for the lofty sum of $900 million by Japan’s global e-commerce giant Rakuten. Since then, Viber has added about 100 million users, and now claims more than 400 million accounts.