Following news that iOS devices are at risk of spyware related to the Hacking Team, the saga continues into the Android sphere. We found that among the leaked files is the code for Hacking Team’s open-source malware suite RCSAndroid (Remote Control System Android), which was sold by the company as a tool for monitoring targets. (Researchers have been aware of this suite as early as 2014.)

The RCSAndroid code can be considered one of the most professionally developed and sophisticated Android malware ever exposed. The leak of its code provides cybercriminals with a new weaponized resource for enhancing their surveillance operations.

Based on the leaked code, the RCSAndroid app can do the following intrusive routines to spy on targets:

Our analysis reveals that this RCSAndroid (AndroidOS_RCSAgent.HRX) has been in the wild since 2012. Traces of its previous uses in the wild were found inside the configuration file:

RCSAndroid is a threat that works like a cluster bomb in that it deploys multiple dangerous exploits and uses various techniques to easily infect Android devices. While analyzing the code, we found that the whole system consists of four critical components, as follows:

Attackers use two methods to get targets to download RCSAndroid.

The first method is to send a specially crafted URL to the target via SMS or email. The URL will trigger exploits for arbitrary memory read (CVE-2012-2825) and heap buffer overflow (CVE-2012-2871) vulnerabilities in the default browsers of Android versions 4.0 Ice Cream Sandwich to 4.3 Jelly Bean, allowing another local privilege escalation exploit to execute. When root privilege is gained, a shell backdoor and malicious RCSAndroid agent APK file will be installed 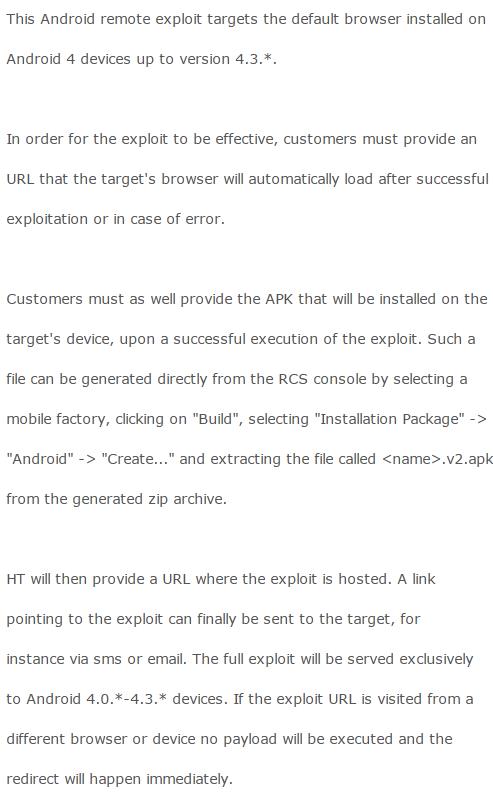 The second method is to use a stealthy backdoor app such as ANDROIDOS_HTBENEWS.A, which was designed to bypass Google Play.

The role of ANDROIDOS_HTBENEWS.A and the malicious APK mentioned in the first method is to exploit a local privilege escalation vulnerability in Android devices. Hacking Team has been known to use both CVE-2014-3153 and CVE-2013-6282 in their attacks. The said exploits will root the device and install a shell backdoor. 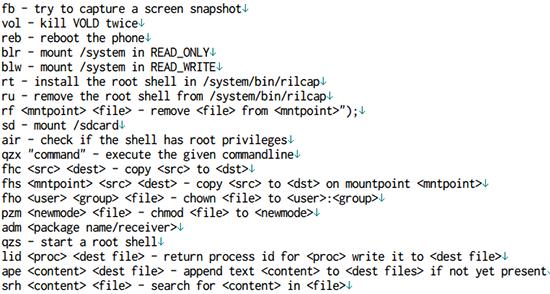 The shell backdoor then installs the RCSAndroid agent. This agent has two core modules, the Evidence Collector and the Event Action Trigger.

To avoid detection and removal of the agent app in the device memory, the RCSAndroid suite also detects emulators or sandboxes, obfuscates code using DexGuard, uses ELF string obfuscator, and adjusts the OOM (out-of-memory) value. Interestingly, one unused feature of the app is its ability to manipulate data in the Android package manager to add and remove permissions and components as well as hide the app icon.

Popular mobile platforms like Android are common targets for organized or commercialized monitoring operations. Attackers know that rooting devices via malware exploits is an effective means to control devices and gather information from them. In a root broken device, security is a fairy tale.

Take note of the following best practices to prevent this threat from getting in your device:

The leaked RCSAndroid code is a commercial weapon now in the wild. Mobile users are called on to be on top of this news and be on guard for signs of monitoring. Some indicators may come in the form of peculiar behavior such as unexpected rebooting, finding unfamiliar apps installed, or instant messaging apps suddenly freezing.

Should a device become infected, this backdoor cannot be removed without root privilege. Users may be required the help of their device manufacturer to get support for firmware flashing.

Trend Micro offers security for Android mobile devices through Mobile Security for Android™ to protect against these types of attacks. Find out more about the 7 Android Security Hacks You Need to Do Right Now to keep your mobile data safe.

We have added a link to a previous report discussing this threat.

Timeline of posts related to the Hacking Team