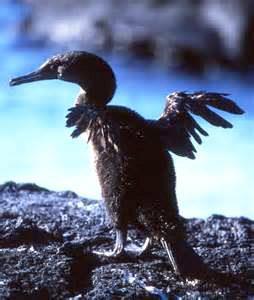 In 1835, the Galapagos Islands piqued a young British naturalist’s endless curiosity. Equipped with technologies not much beyond a clock, compass, measuring tape, scale, thermometer, clinometer, and a microscope, the experience eventually propelled Charles Darwin to propose a new world-shattering theory of evolution in his 1859 book–The Origin of Species. Since then, technological advances have been revolutionizing science and challenging more than just Darwin’s theory of evolution.

For the first time, the genome of one of the most unique birds on the iconic islands, the cormorant (pictured), have been sequenced. Unique in that, of the more than forty known cormorant species in the world, the Galapagos Islands cormorant is the only species incapable of flying. To explore the genetic reasons, scientists at the University of California, Los Angeles, have been studying the genome of the flightless Galapagos cormorants associated with the bird’s loss of flight – the new Galapagos icon of evolution.

In The Atlantic article, “How an Icon of Evolution Lost Its Flight; Scientists have discovered some of the genetic changes behind the useless wings of the Galapagos cormorant,” science writer Ed Yong 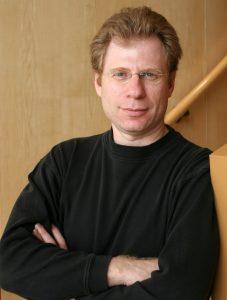 interviewed Leonid Kruglyak the study’s senior corresponding investigator and Chair of the Department of Human Genetics at UCLA.

“I like seeing wildlife in general,” says Kruglyak, “but some of these creatures have become iconic in evolutionary biology.” Even though Darwin’s Galapagos finches, with their well-adapted and variously shaped beaks, are “especially famous,” Yong reports, Kruglyak “found them underwhelming… [and,] more drawn to the flightless cormorants.”

The study, “A Genetic Signature of the Evolution of Loss of Flight in the Galapagos Cormorant,” was published in the prestigious journal Science (June 2017) – the official journal of the American Association for the Advancement of Science. 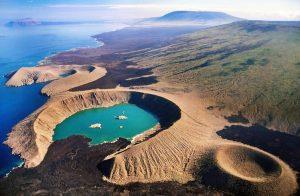 The flightless Galapagos cormorant, known formally as Phalacrocorax harrisi, is the only cormorant species on Galapagos Islands. Incapable of flying, the species is found only on the islands of Isabela and Fernandina – exemplifying the unique volcanic fauna of the islands (pictured).

Cormorants (pictured) can be compared to a duck. Like members of the cormorant family, the Galapagos cormorant catches fish by diving using its four-webbed skinned toes. The Galapagos cormorant, however, is larger than other cormorants – about sixty percent bigger overall. Its wings are noticeably stubbier with shorter, softer, denser, and more hair-like feathers. As a flightless cormorant, the flight muscles size is a fraction of their original size.

Darwin, however, may have never seen the flightless Galapagos cormorants. During his five-year global expedition, while  Darwin only mentions the cormorants (pictured) five-times in his Voyage of the Beagle, but during his thirty-five-day survey of the Galapagos Islands in 1835, the flightless cormorant is never mentioned. 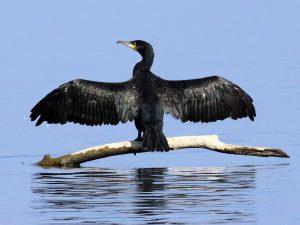 Underwhelmed by Darwin’s finches, evolution scientists have turned to the flightless cormorants as the new Galapagos icon of evolution.

Kruglyak’s interest in the cormorants started during a recent trip to the Galapagos Islands. From the perspective of a geneticist, Kruglyak was interested to investigate whether some genomic difference was associated with the bird’s loss of flight. Specifically, he wanted to pin down DNA evolutionary changes in the genome that might have evolved to ground the species.

After returning to his UCLA lab, along with first author Alejandro Burga, a postdoctoral fellow in Kruglyak’s lab, they contacted Patricia Parker (pictured), a professor of zoological studies at the University of Missouri-St. Louis who had previously obtained DNA from 223 flightless cormorants blood samples—almost a 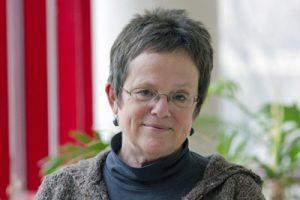 quarter of the total endangered population. Parker agreed to collaborate.

Using Parker’s samples, Kruglyak’s team sequenced the flightless cormorant genome, then compared its DNA to that of three other cormorant species looking for specific genomic changes now unique to the flightless species.

Their analyses eventually led them to the gene called CUX1 – a protein coding gene – a gene widely found in vertebrates, including humans. As Ryan Cross reported in the journal of Science article “How the clumsy Galapagos cormorant lost its flight” –

“Our results indicate,” explains Kruglyak, “that the combined effect of variants [mutations] in gene … contributed to the evolution of highly reduced wings and other skeletal adaptations associated with loss of flight in P. harrisi.”

Kruglyak considers the loss of flight as evidence for evolution.

The team took one step further, by testing the effects of the mutated CUX1 gene inserted into the Caenorhabditis elegans (round worm) – a popular species for studying stages of development. The team used the new CRISPR gene editing technology, As Cross explains –

“When they inserted the [mutated] cormorant’s CUX1 gene into cartilage- 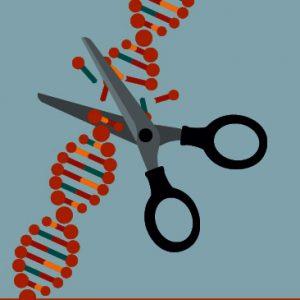 Kruglyak’s team has successfully determined that the mutations in the CUX1 gene are associated with the loss of flight in the Galapagos cormorants and stunted development in the round worm.

Since CUX1 is also found in humans, what is the effect in humans? That information is already known. As ScienceDaily notes in the article “How the Galapagos Cormorant Lost its Ability to Fly,”

“Changes to the genes [CUX1] that shortened the Galapagos cormorant’s wings are the same genes that go awry in a group of human bone disorders characterized by stunted arms and legs, suggests new research.”

In humans, mutations in the CUX1 gene are associated with the development of a series of rare diseases known as ciliopathic diseases.

For Kruglyak, the emergence of CUX1 mutations serves as advantageous evidence supporting evolution.

The theory of evolution developing through genetic mutations was never on Darwin’s radar. Mutations acted on by natural selection was not developed as a theory until the early twentieth century; eventually becoming popularly known as the modern synthesis.

Julian Huxley coined the term “modern synthesis” in his 1942 book, Evolution: The Modern Synthesis. Receiving the Lasker Award in the category Planned Parenthood – World Population in 1959, Huxley eventually emerged as a prominent member of the British Eugenics Society serving as president from 1959–1962.

The modern synthesis theory integrates Darwin’s natural selection with Gregor Mendel laws of genetic inheritance; the mechanism allowing mutations to accumulate from generation to generation. Since then, modern synthesis has been the dominate theory of evolution advanced by many, including Douglas J. Futuyma. 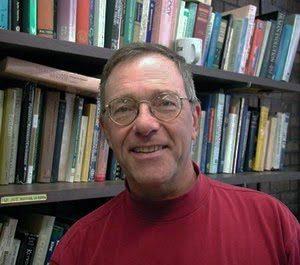 As an American evolutionary biologist, Futuyma has been a long-standing evolution advocate and the author of numerous widely used textbooks on evolution, including Science on Trial: The Case for Evolution (1982), and Evolution (2013).

As a Distinguished Professor in the Department of Ecology and Evolution at Stony Brook University, New York, a Research Associate at the American Museum of Natural History, New York City, and winner of the Sewall Wright Award (1997) and Leidy Award (2012), Futuyma known for his work in public outreach, particularly in advocating against creationism. Openly gay, Futuyma is also an LBGT rights activist.

“By far the most important way in which chance influences evolution is the process of mutation,” Futuyma continues –

Kruglyak’s theory of evolution remains consistent with the modern synthesis theory: mutations drive evolution. But, Cross asks the important question: “Do the Galapagos cormorants gain anything by their ungainliness?” “Parker thinks not,” notes Cross. Parker argues.

“In fact, it might be possible that the Galapagos cormorant is a little worse at catching fish, since they don’t have to muster up the energy for flight.”

“Granted,” Cross continues, “they might just be freeloading off their largely predator- and pathogen-free island abode.”

If the flightless cormorant becomes the new Galapagos icon of evolution – with a mutated CUX1 gene replacing Darwin’s finches, the evolution industry is left with the daunting task of explain how the loss of flight is a “survival of the fittest” advantage. 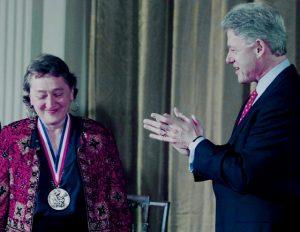 Genetic mutations as an evolutionary mechanism has a sordid history. In Acquiring Genomes: A Theory of the Origins of Species, National Medal of Science award winner (1999), Lynn Margulis, from the University of Massachusetts Amherst, and Dorion Sagan, the son of astronomer Carl Sagan, explain –

“Mutation accumulation does not lead to new species or even to new organs or new tissues … [mutations] tend to induce sickness, death, or deﬁciencies. No evidence in the vast literature of hereditary change shows unambiguous evidence that random mutation itself, even with geographical isolation of populations, leads to speciation.”

Finding replacement for mutations, however, has proven to be as difficult as finding life on Mars. Having reached an impasse, last November, the Royal Society in London convened leading evolution theorists to revise the modern synthesis theory of evolution noting that –

“Developments in evolutionary biology and adjacent fields have produced calls for revision of the standard theory of evolution, although the issues involved remain hotly contested.”

Science writer Carl Zimmer in The Atlantic in the article “The biologists who want to overhaul evolution, a half-century’s worth of scientific discoveries since the last major update to evolutionary theory has some researchers pushing for a paradigm shift.” Kevin Laland, sensing the tension, reported one of the more positive experiences early during the convention –

“I think it’s going quite well. It hasn’t gone to fisticuffs yet.”

The old guard is in control; efforts to oust mutations as a mechanism of evolution is hand-to-hand combat. Recent technological advances in genetics, mutations have largely eroding the tenets of the modern synthesis theory. Mutations have been an evolution failure.

This dilemma highlights a core question that has been building since the mid-twentieth century: can biological evolution be studied as a science? Amazingly, according to National Medal of Science award winner (1969),  Ernst Mayr, the answer is No.

“Biology, even though it has all the other legitimate properties of a science, still is not a science like the physical sciences.” 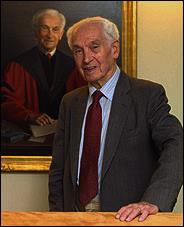 Evolution has a distinct problem: it cannot be tested, repeated, or used to predicting outcomes – like, apples in the apple tree will always be pulled by gravity fall to the ground.

Biological evolution also has a falsifiability problem: anything can be caused by evolution since the theory of evolution does not include a mechanism to exclude non-evolution events.  Evolution, as a scientific theory, is in crisis.

As a result, within the bounds of biological evolution, contradictions abound. While Darwin envisions evolution over long epochs of time, the theory known as gradualism, by contrast other evolutionists, for example Stephen Gould and Niles Eldridge, envision evolution happening over very short “punctuated” periods of time. On scientific principles, evolution theory skeptics are justified.

“There is something fascinating about science,” argued Mark Twain. “One gets such wholesale returns of conjecture out of such a trifling investment of fact.” The evolution industry is long overdue for a science restart to salvage any remaining semblance of professionalism.

If Kruglyak is correct, with the new Galapagos icon of evolution replacing Darwin’s finches, the theory of evolution faces more, not less, challenges as a scientific theory. 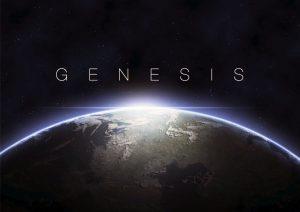 Despite a flood of challenges since the publication of The Origin of Species, followed by more than 150 years of unprecedented scientific efforts in the history of science to prove otherwise, the scientific evidence observable in nature is increasingly best explainable by the Genesis record written by Moses.

Evolution is a theory in crisis; existing only as a philosophy, not a science.