“Quick, download this app named Viber – it gives you free phone calls”, was the WhatsApp message I received.

What really is Viber? 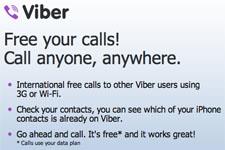 In a nutshell, it is to voice calls what WhatsApp is for text messaging. This means, 2 persons with Viber installed can exchange phone calls for free (merely using a 3G data plan or WiFi). For now, there are no ads at all, and no fees. Very honestly, I wouldn’t mind paying WhatsApp prices for an app like this.

Viber is a VOIP app, much like Skype. Benefits of Viber over Skype are, you do not need the app to be open to receive calls. It scans through your contacts and picks out friends who have installed Viber. It’s currently only for the iPhone, but Android and BlackBerry versions are promised soon.

The proposition sounds too good to be true, and you have absolutely nothing to lose by trying it out.

Back to my story…

I was halfway up a space needle ride of sorts, but decided to comply with my persistent friend. 2 minutes later, I had installed Viber, in between gawking at the marvelous views of Malacca city around me. From up top, I made an interstate phone call over 3G to test the voice quality, and was very pleasantly surprised. I would not have been able to distinguish between a regular phone call and Viber.

I hope this quality persists, as we are still in the early days – when the traffic surges, let’s hope there are enough resources to sustain the strain of voice calls. 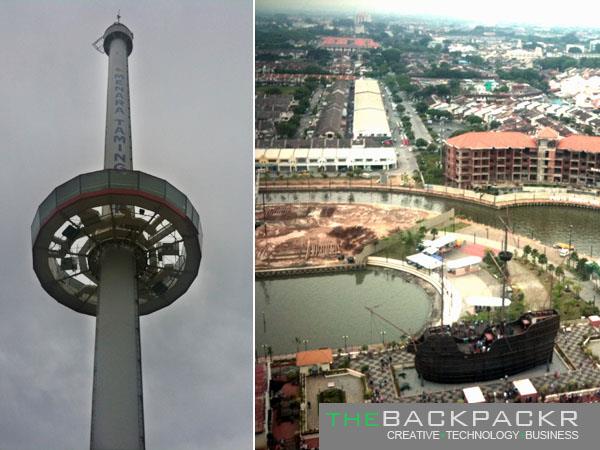 To activate Viber, a text message access code will be sent to you for authentication, as you must prove ownership of your mobile number. Unfortunately, many people spanning the globe from as far as Malaysia to UK to Mexico, Taiwan and Japan seemingly have problems receiving this access code. A solution to that is posted by Viber here.

One thing I did was to omit the prefix of my phone number when signing up. For instance, if your phone number is 0414.xxxxxx, when keying it into Viber for authentication, select your country, which already gives you the country prefix (e.g. +61), then key in only 414.xxxxxx. Leave out the first ZERO.

The interface has been made extremely similar to the native iPhone phone application, and it’s rather surprising Apple didn’t kick up a fuss about it – or the many telcos they partner with. Here’s the Favorites and Recent screens – showing you can make calls via normal mobile (defaults to the native iPhone app) or Viber.

The only gripe I have with making normal mobile calls is that it does not return you to Viber upon call completion. 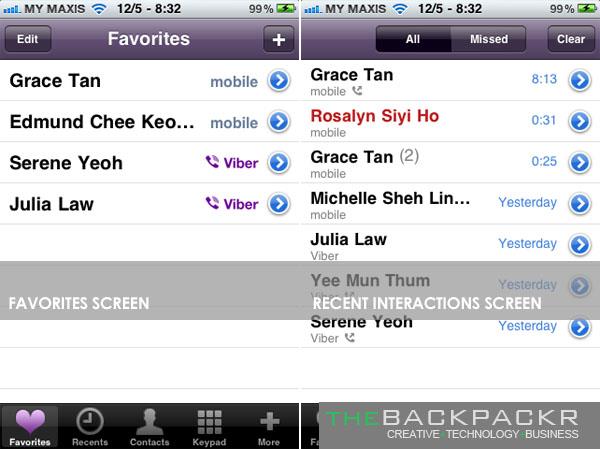 Then we have the Contacts and Contact Details screens, which look identical to the iPhone’s. I like the way Viber is boldly demarcated. 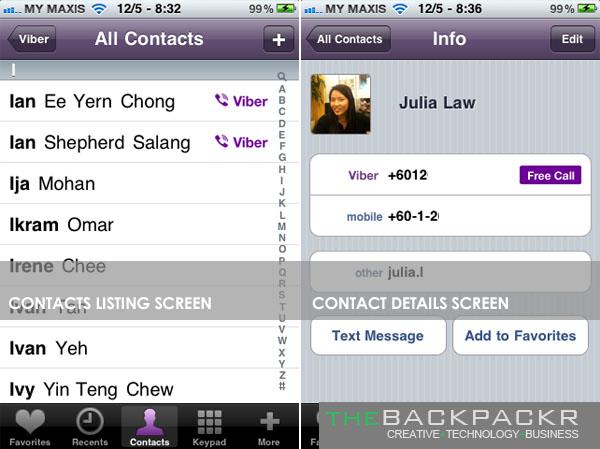 And finally, the actual process of making calls… If you choose a Viber number, you will get a regular call screen, except for the icon that allows you to switch to the regular GSM network – possibly in the event of poor data reception.

Making calls to regular numbers (righthand side screen) will fire up the regular iPhone app again. 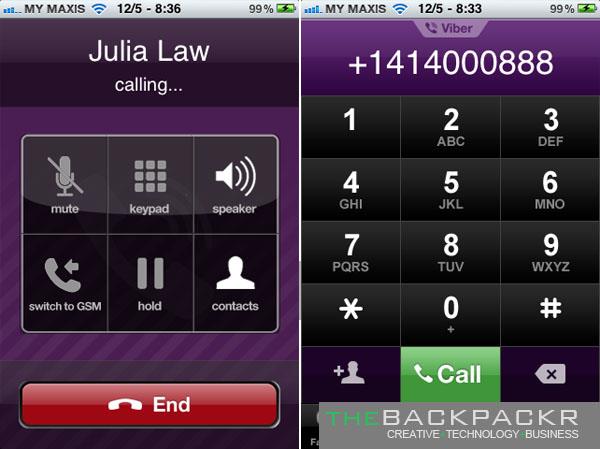