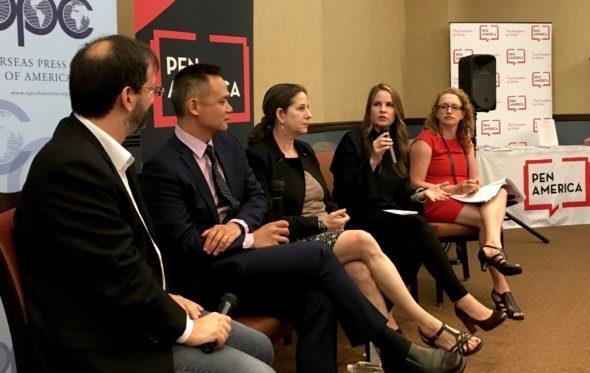 A New York-based advocacy group has released a report criticizing the Chinese government for censoring foreign journalists and news organizations.

The 76-page report, entitled “Darkened Screen: Constraints on Foreign Journalists in China,” was compiled by PEN America, a nonprofit group that advocates freedom of the press. It finds that “the general working environment is becoming more difficult for foreign journalists to navigate,” especially since President Xi Jinping came to power in 2012.

Foreign journalists and news organizations tend to enjoy much more freedom than their Chinese counterparts, who are rigorously censored by the Chinese government. But Suzanne Nossel, executive director of PEN America, hopes that the report will draw attention to the increasing constraints that foreign journalists face. “There’s another story thatneeds to be told, and that centers around the critical roles of foreign journalists in providing an essential window into China,” she said at the event.

About 700 foreign journalists and 50 international news organizations currently operate in China, including The New York Times, The Wall Street Journal and CNN, according to numbers cited in the report.

But many of the 42 current or former foreign correspondents interviewed for the report over the past seven months think that Chinese officials increasingly perceive them “as fronts for their governments” and “biased against China,” and have become more aggressive and sometimes violent in harassing and intimidating foreign journalists.

During a panel discussion co-hosted by the Overseas Press Club at its Midtownheadquarters, Edward Wong, The New York Times’ Beijing bureau chief since 2012 and one of the journalists interviewed for the report, said that some top Chinese officials believe in a conspiracy among western countries. They believe western countries “are pushing domestic, indigenous revolutions around the world,” such as the Iranian Green Movement, the Arab Spring and unrests in former Soviet Union states. According to Wong, these officials see “the western media as the foreshadow.”

Li, who is now a public policy graduate student at Columbia University and lives in New York, recalled a conversation with a Chinese official: “They asked me, ‘What role does the Times play in advancing Obama’s agenda.’ I said, ‘the White House and us are basically enemies.’”

Though China has one of the highest numbers of journalists in jail, threats directed toward foreign journalists usually come in the form of “manhandling, tailing, and blocking access,” the report says. The Chinese government also delays or denies visas to punish foreign journalists fortheir coverage. In one instance cited in the report, Al Jazeera shut down its English language service in China from 2012 to 2014 because one of its journalists were denied her visa renewal.

The report also claims that many foreign journalists feel less safe in China since 2012. Gady Epstein, The Economist’s former Beijing bureau chief, said that in fact Chinese sources and employees working for foreign news organizations face the most danger. “You don’t see any foreign journalists in jail, but the risk of intimidation or jail is much more real for Chinese people,” he said.

Though Li said after the event that she didn’t experience intimidation by officials, she was told by her roommate that some police officers had visited their apartment in Beijing several times when she wasn’t home. Li also said the officials apparently had information about her parents.

It has become more difficult to interview Chinese academics, Epstein said before the panel began, because of the Chinese administration’s ongoing campaign to silent dissidents. “My biggest concern is getting my sources into trouble, so I have to be very careful with my travel,” he said.

The report finds that some foreign news organizations, especially those with significant business operations in the country, “appear to refrain from publishing stories on their Chinese language websites that would anger the Chinese government.” The report said that Thomson Reuters has employed a unique vetting process for stories on human rights in China, which one anonymous Reuters reporter calls “self-censorship.”

But Barbara Demick, the Los Angeles Times’ former Beijing Bureau chief, said that the conditions described in the report did not stop some young Chinese people from pursuing journalism. “There are a number of universities inside China that are teaching western style journalism,” said Demick, who visited and spoke at several journalism schools in China over the years. “The students certainly want to be real journalists. They are taught in this way.”

An earlier version of this article referred to “The 40-page report” from PEN America. It is 76 pages long.

This entry was posted on Thursday, October 6th, 2016 at 7:26 pm. It is filed under Featured, Policy, Uncategorized and tagged with China, Freedom of the press, Midtown Manhattan. You can follow any responses to this entry through the RSS 2.0 feed.