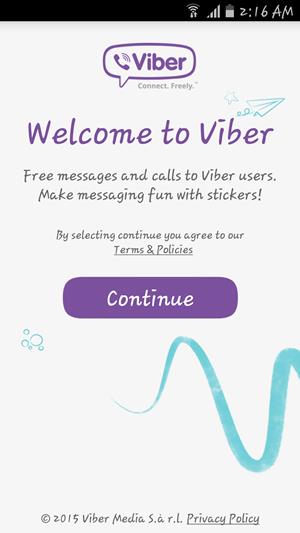 There are a lot of great messenger apps for Android, some of them stand out far above the others. Undoubtedly, Whatsapp is one of the best chatting apps available on the platform. However, there is another app that matches it neck to neck when it comes to features and the usability. Viber is an underrated and mostly overlooked messenger app available on Google Play Store.

I’ll be honest with you if you’re already using Whatsapp or even the Facebook Messenger; there is a slim chance that you’ll also use Viber. This is the biggest problem the app faces. Don’t get me wrong, Viber does everything you want it to do and more. However, you just cannot justify using another extremely similar app to the one you are already using.

If you’re willing to give Viber a chance, this explorative article will get you familiarized with major features available on the app. My personal experience with Viber has been a pleasant one. Although I didn’t get much actual talk time on the app (around 20 minutes), it responded well to anything I wanted it to do. Now that we have performance and other concerns aside let’s dive into the app itself and explore what it has to offer.

You can visit the Google play store page and download Viber on the device of your choice.

The app will take a little time for the installation. However, unlike other apps, you will need to perform an initial setup to get it running. The app makes sure that the process is as simple as possible.

I like that Viber uses your smartphone number to activate itself. This way, you are somewhat secure from trolls, harassers, and fake accounts. After you’ve entered the cell phone number in the appropriate section, you will need to activate the app with a confirmation number. 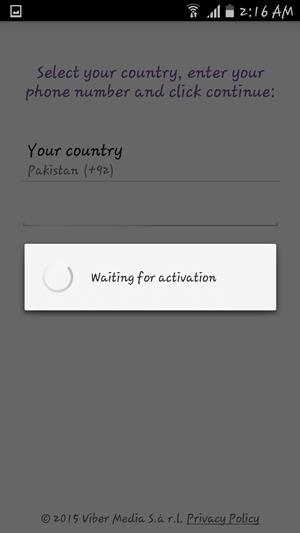 This is where Viber makes things easier for you. Usually, other apps send you an SMS that contains the activation code. Viber called me, and when I received the call, the activation number was automatically added to the app. I was pleasantly surprised to see this method used in an Android app. 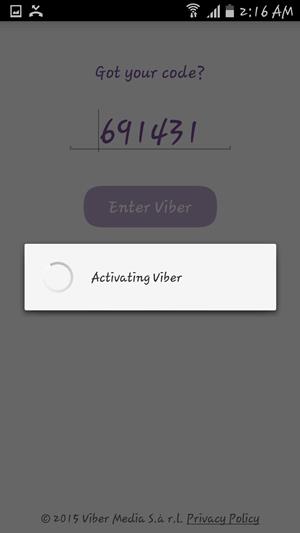 After that, you can either opt to log into your Facebook account and save even more time or make a new account from scratch. I used the convenient way of getting my profile picture and contacts into Viber. However, it is good to have an option of starting anew. That concluded the initial setup and to be honest, it didn’t feel like a chore at all. 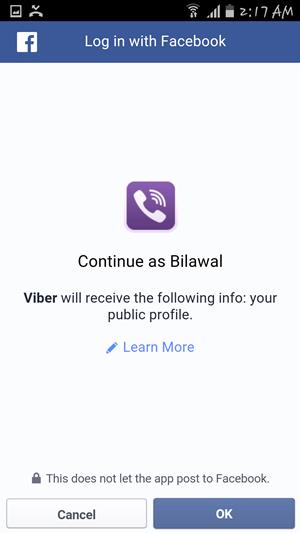 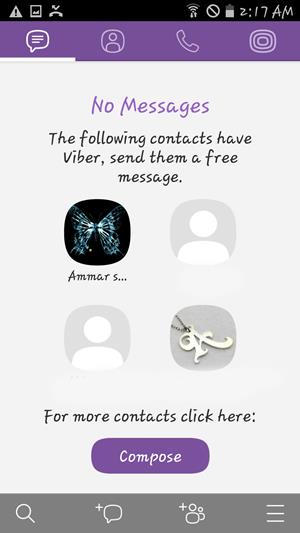 There are four distinctive tabs right on top of the interface. The first one allows you access to messages; the second one is for contacts that are on Viber. The third tab on the top is a call log, and the last one is for public chats. 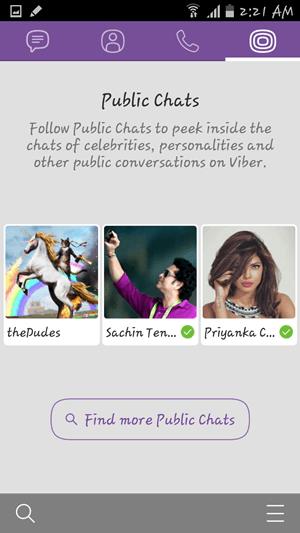 The bottom of the screen has a search button on the extreme left. Then, there is a new chat button that enables the start of a new chat with the person. The next one is for adding more contacts to the app manually. The last one opens the side menu for additional settings and information. 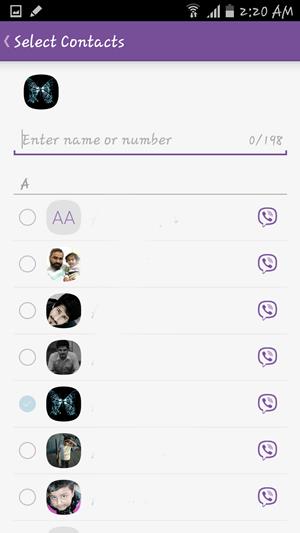 All in all, the main interface is very well designed and follows a unique purple theme. The well-rounded icons are pleasant to look at and are distinctive enough not to need any text for explanation.

Viber, at its heart, is a simple messenger app first. The text-based chatting in this app is remarkably smooth and works well in every aspect. 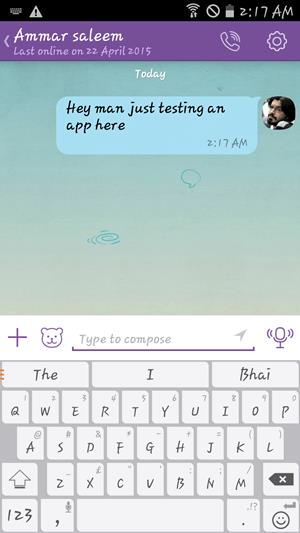 Tap a Contact to start an instant text chat. The default keywords you have selected on your device will pop up, and you can type away. Point to be noted here is that the app will need a constant Internet connection to send texts. This is not an SMS app for Android and should be used as an online communicator. 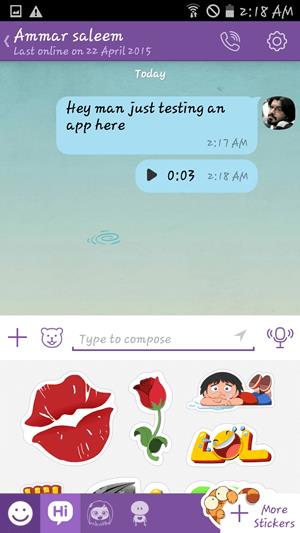 Sending the text works similarly as an SMS app or any other messenger you have used. There is nothing remarkable about Viber in this regard. Thankfully there are different stickers you can use to enhance the meaning of your messages. The stickers range from funny to extremely adorable, and can be effectively used to make conversations more expressive.

One great feature of Viber is that you can record audio messages and send them. The recipient needs to be online for this feature to work. You can record and send the message, and they will get it when they come online. It is an excellent way to give reminders to your friends who are as lazy as me. 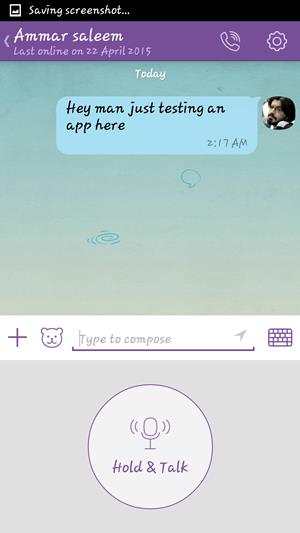 To record a message, you need to press the mic button on the top right corner of the keyboard. The keys will be replaced with a large circular button that you have to hold while talking. The messages will be automatically sent when you stop holding the record button. This is a very intuitive and almost immediate way to send audio recordings.

If you prefer to talk live, Viber also comes with a calling service. One of the best things I noticed about Viber is that it allows you to make phone calls with great sound and connection quality, yet use very little mobile data. Viber is one of the most efficient apps when it comes to saving data. To make a call you can tap the call icon on the top right corner of the screen, or you can access the option from the dialer directly. 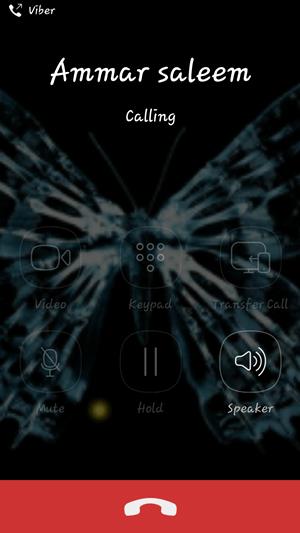 Once you have engaged in the call, there are standard options that you can select. One of the important ones is the video call; it is a great way to talk face-to-face with your friends. You can also activate keypad to add additional people into the call.

The call quality was highly satisfactory while using Viber. I found no quirks while talking with my cousin for 20 minutes.

Viber allows you to do a lot more than a standard chatting app. One of the great additions to the app is the simple and easy photo sending. While it is not as intuitive as using Snapchat to send pictures, it does a magnificent job in making the process easier. 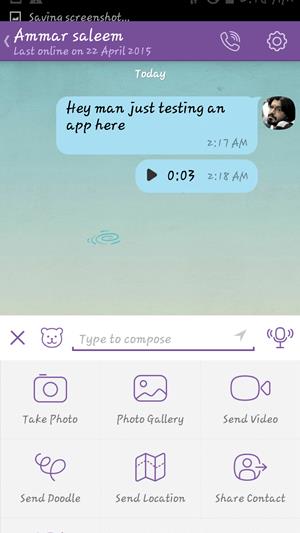 You can also send doodles directly from the app. I found this feature surprisingly robust. You can change the size of the brush, type of the brush and even the colors easily. I got lost in making rude art to send to my buddies by using this great feature.

The S-Pen of my Galaxy Note III was instantly compatible with the app and helped me in drawing detailed pictures. It is not of the best S-Pen apps for Android caliber, but it works great. 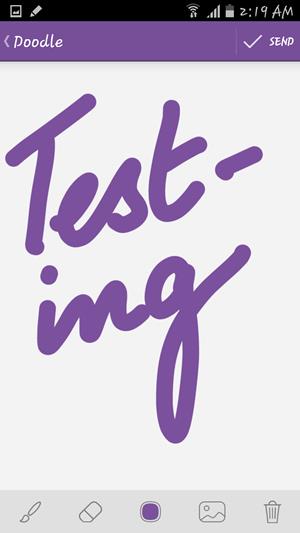 Public chats is another good way to connect with others of similar taste or get in touch with your favorite celebs. It is similar to Reddit AMA that celebrities hold occasionally. However, the app is not that famous among celebrities, so it lacks a bit in this feature.

Viber is one of the easiest apps to use. I had no trouble at all using the app, and everything worked as intended. Viber would have gained a lot of traction in the market if it was released before Whatsapp.

Right now, I don’t think there is a reason to switch to this if you are already using another messenger app for Android. However, if you need quality voice calling and that too with little data usage,