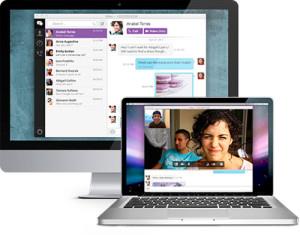 Viber – a perfect app for communication

Viber originally was designed as a free messenger for smart phones, then there was developed a version for tablets and now it is available for PC. Nowadays everybody can download Viber to its computer and communication will immediately become easier and better!

Like smart phone version, Viber for personal computer has a lot of functions and will allow you not to lose connection with your friends.

Era of paid messages has gone

Many of you use the well known analogue of Viber for free video communication. But still it is only the analogue. Using Viber you also can make calls free of charge to the relatives, friends and acquaintances who have also installed Viber. The quality of the calls is really good and a lot of people in the whole world have already tested it.

Ofcourse you should not worry about the synchronization of your contacts and correspondence – every chat, which you had when using smart phone or tablet will be displayed on your personal computer. It was made for a more comfortable use of the program. Also it should be noted, that the quality of app and each detail separately is very high: sound, quality and variety of animated smiles make user feel comfortable and satisfied.

Each application has its advantage over the others. Talking about Viber they are:

Viber is in priority among users. Even the most popular analogue of Viber does not support voice calls.

In August 2013 the service enjoyed over 200 million people, located in 193 countries. In February 2014 Viber was installed by 330 million of users.