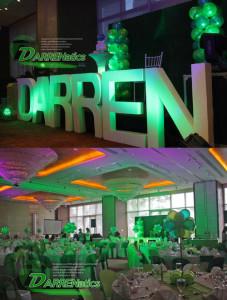 After a very successful birthday concert held at the Mall of Asia Arena on May 29, 2014, the DARRENatics showed more of their passionate love by surprising Darren Espanto with a fabulous birthday party! It was a perfect way to end his birthday month and as it also marks the 1st birthday of a family called DARRENatics.

Held on the 31st of May, the party was organized by the DARRENatics Philippines. Darren had no idea about the party, all he knew was that he was going to perform in a corporate event.  Having the One Shangri-La Plaza in Mandaluyong as its venue, the chandeliers hanging on the high ceiling gave the function room a classy and elegant look and atmosphere. The tables and chairs are covered with white cloth and accented it with a piece of green one. Above of each table is a balloon centerpiece and an animated version of Darren holding number which indicate its table’s number. Both sides of the room is a table where the buffet food is located. The stage has two tower green balloons, a cake and a chair in which Darren was supposed to seat. There are big letters below the stage that spelled out “DARREN”. At the corner of the room is a candy buffet which are filled with mouth-watering and colorful candies, mallows, chocolates and gums. Just beside it was a photo booth. 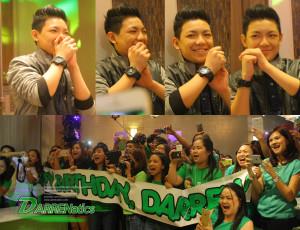 Cakes from different subgroups started arriving at the venue by 3 PM. They came in different sizes, designs and concepts. It shows how creative the DARRENatics can be. Around 4 in the afternoon, DARRENatics are slowly filling the venue. They first had their names registered and each one was given a name tag. They also have their designated tables to sit to. While waiting for Darren to arrive, they took their time to chit-chat to their friends, take pictures and just enjoying the time. There was a huge tarpaulin provided for them to be able write their birthday wishes for Darren. As time passed by  news was received that Darren is on his way making everyone excited. Everyone was listening intently as the host, DJ Ramsey (who also hosted the Christmas party in Robinsons Forum) explained what they should do when Darren arrive. The plan is a lady will enter first signalling that Darren is about to enter. The host will give a brief introduction to Darren and when he enters the room everyone will shout “Surprise!” Laughter filled the room when they practiced the whole plan having Denes from Team Baliwag as Darren. 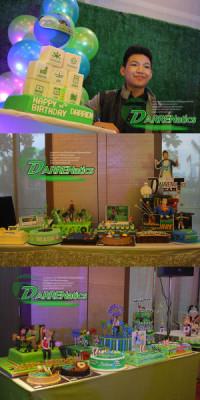 Few more minutes later, everyone was asked to be quiet since Darren was already outside the room preparing for his supposed performance. Darren sure had no idea what was in store for him once he enters the room as everything from the outside seemed really just like a corporate event.  DJ Ramsey bluffed how excited he was for what was stored for the night since he received an information that the company will be giving out a house and lot in a raffle. DARRENatics are excited and just gamely shouted “Happy 40th Anniversary!” When the lady finally entered signalling that Darren is about to enter, all cameras are up  as all are thrilled to capture Darren’s reaction. As soon as the big doors were opened, Darren entered in and he was about to wave his hands as his usual gesture but his hands flew to his mouth covering it showing how shocked he was as the DARRENatics shouted “Surprise!” The plan really went well as his surprised look stayed on his face for few more minutes. When asked, he said that what he knew is he will be performing for a party and he was already preparing and vocalizing. He also said that he just woke up that’s why he really don’t know what to say plus he was really surprised seeing it.

After that overwhelming welcome, he was led to the stage where he seated with a big smile on his face. It was very fulfilling seeing that big and joyful smile of his. The program commenced with a prayer and welcoming all the guests present, Darren’s family, respective people from MCA Music and Astroplus, and of course the DARRENatics. Lynelle, his little sister, seemingly enjoyed the candy buffet since she kept on coming back. Each group present were given 2 minutes to give their birthday message to Darren, present their gifts and have a group photo op. It was the time where people are trying to hold on to their tears from flowing as they deliver their short but very meaningful and sweet messages for Darren. Some even offered a song and a poem to him. DARRENatics are really passionate in showing their support and love for Darren. After the touching moments, Darren was then asked to take a picture with his cakes and to enjoy the photobooth. He was also asked to make a wish and blow the candle of the cake on the stage before everyone can enjoy the delicious dinner buffet. 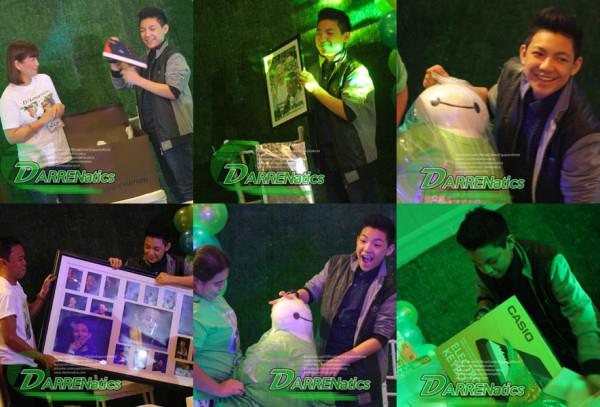 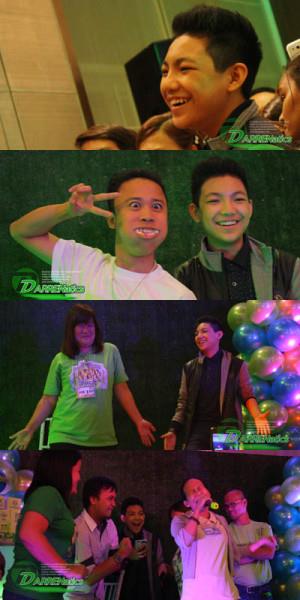 The second part of the program started right after the dinner. It was the most fun part of the night since there were games and more surprises. Darren chose 5 groups and they had to choose a representative to play the game and the winner would be given a Darren-customized chocolate. The first game was called Chubby Bunny wherein the contestants had to stuff as much mallows in their mouth without swallowing it and they have to say the words “chubby bunny” clearly. The 5 contestants were down to the 2 finalists, Denes from Team Baliwags and Raquel from TV Crew, who have in overall 14 mallows in their mouth. When the time they had to say the words Raquel then gave up making Denes as the winner.

Another set of contestants are called up to the stage for the second the game. The host told them that Darren recently posted a video of himself doing the popular Whip Nae Nae dance. The next game was more of a competition of who can do the best Whip Nae Nae dance. Darren did a sample first of the dance to help the contestants. They were all feeling shy but they did it. Despite of the shyness they felt they still did a great job. The winner was determined by the audience loudest cheer. At the end, Beth from Team Bahay got the loudest cheer, making her the winner.

The third game was the Longest Game. Players should say “I love you Darren” prolonging the last syllable as long as they can. Before the game started, Darren taught them the proper breathing. After doing it the game finally started while Darren was using his phone as a stopwatch. The 5 players did a very great job and laughter resonated inside the room. Arah from the Cheering Team won with the record of 16 seconds.

Darren’s family was called up in stage. His parents gave a very moving message about the success he is experiencing now and how he has to deal with the ups and downs of his career, saying that humility should be his number one asset as a person. They also thanked the DARRENatics for always being there for Darren. His little sister wished him a great birthday as well.

Darren was really grateful to the effort of the DARRENatics which made the surprise birthday party possible. He stated that he was “nabulaga” and he really have no words for what he felt. He said that it doesn’t have to be that grand of a celebration, even if it was just simple, it will still mean so much to him. His message touched the hearts of the fans. 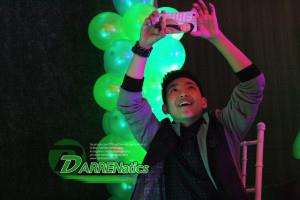 The night wouldn’t be complete without hearing the wonderful voice of Darren. He belted out astoundingly the song “Love Never Felt So Good”. The next song was the song that started everything. The song that made him Mr. Domino. At the chorus part of Jessie J’s “Domino”, Darren put out his phone and recorded a short video with the DARRENatics.

The party has come to its end but there is still one more surprise prepared for Darren. If remembered, if he has a song to sing for the DARRENatics it would be “Count on Me” by Bruno Mars. But that very moment the DARRENatics sang the song for Darren. The cheeky smile on his face cannot be wiped off and it reaches his ears. He clapped along and recorded a video while the fans were singing. As the song ended, together they shouted and greeted him a happy birthday once again. 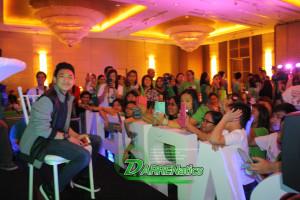 It was very heart-warming to know how Darren loves and values all of his supporters and that was more than enough for the DARRENatics. His priceless smile gives energy to them and it was indeed a treasure. It has been a year since Darren started his journey and together they have travelled a long way and no matter what happens they will always be there for him. As others may not believe in forever but as a contradiction to that say, eternity do exist in being a DARRENatic.