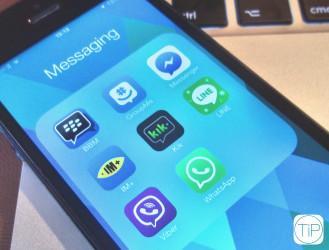 Unfortunately, the messaging ecosystem is a mess across all of today’s smartphones. Instant messaging does not have a universal protocol that all apps can tap into (like email, for example) so our conversations are tied to the messaging services that we use. That makes switching between messaging apps difficult as our friend lists, conversations, account details and so on are all lost in the transition meaning people end up stuck with the services they have signed up for. You can’t sign into BBM with your iMessage account, for example, so you have to make that choice as to which service(s) to pick and stick with.

iOS as a platform provides hundreds of apps for instant messaging, including Apple’s own iMessage which is built into the default Messages app. This plethora of options  is both a good and bad thing – good because we have choice and plenty of ways to avoid paying for SMS charges (particularly abroad), and bad because choice creates fragmentation and our friends are dispersed among many different messaging services. Until a universal  messaging protocol is created and adopted, here are some of the most popular and feature-packed messaging apps that will allow you to communicate with your friends and family (just make sure you’re all using the same service!).

BlackBerry may be struggling financially but they still managed to get BlackBerry Messenger for iOS out of the door. Going cross-platform was a big decision for BlackBerry – BBM was a key feature tying many people to their BlackBerry devices. Now it’s available on iPhone (and Android) and allows you to message your BBM-using friends on any supported device. Add friends using BBM PINs instead of phone numbers or email addresses.

The interface of the app is reminiscent of the BB10 operating system on the BlackBerry Z10. BBM allows text, picture and voice messages and is perfect if you have a lot of friends already on the network.

Tied directly into your Facebook account, Facebook’s standalone Messenger app allows you to message your friends as you would via the website. There is support for individual or group message threads and you can send text, images, voice clips and stickers to your friends. Everything syncs with the web version and all of your Facebook friends are already there to contact, no need to add them via email, PIN, phone number or any other means. You can also voice call people through the app in supported regions.

GroupMe uses your iPhone’s contacts meaning there is no need to add people via email or PIN to start a conversation. The app can be used for group or individual messaging with support for text and picture messages (the built in meme tool adds some humor) and you can “like” messages sent within a conversation.

IM+ Pro7 is an “all-in-one” messaging app with support for multiple accounts across networks. The app supports Facebook, Skype, AOL, Google Talk and many other services meaning you can have all of your conversations in one place. The Off-the-Record encryption in IM+ also means that your messages cannot be read by any third party no matter which messaging service is used.

Kik is an instant messaging client that allows individual conversations with support for a number of media. Send text messages, images, YouTube videos, stickers, sketches, memes and photobombs (self destructing images a la Snapchat). Simply add users by their username.

LINE has proven extremely popular in Asia and allows for messaging as well as voice and video calls. It’s an all-round communications app with support for text, images, stickers (hundreds of which can be purchased via In-App Purchases) as well as an in-built Timeline feature that operates a bit like a Facebook profile.

Check out Viber if you want to send text, picture and video messages worldwide for free as well as the ability to make voice calls. Your phone number becomes your ID so it’s easy to find friends who use the service and share content with them. Chat individually or in groups and, as the app is cross-platform, it means that it should be available on pretty much any device.

WhatsApp was one of the first messaging apps to break ground and get a decent user base meaning it is still one of the most used today. Its features and user interface have been lagging behind the others until recently when it was given a major update. Now, its iOS 7-style design is lovely and you can send images, videos, text messages, voice notes, share locations and more to individuals or groups easily. Your contacts who already have WhatsApp will be visible based on your address book so it’s easy to find your buddies.