That bumpy ride really made me wanna stretch my butt. Is there even such a thing? Stretching your ass out? Well if there wasn’t, there was a necessity to make such a thing after the ride to Bada Valley in Pak Manaf’s car, which had the thinnest cushions ever.

Bada valley is located in the south region of the Lore Lindo National Park. Yes, entering another National Park *fist pump. The trip was about a 65 km ride through a really bad road. Some parts was so rocky, Pak Manaf had to maneuver the car as if it was a 4WD. The car made sounds as if things were falling out, but it kept on going. We were happy as long as we can get there and back… yeah… getting back is another adventure… 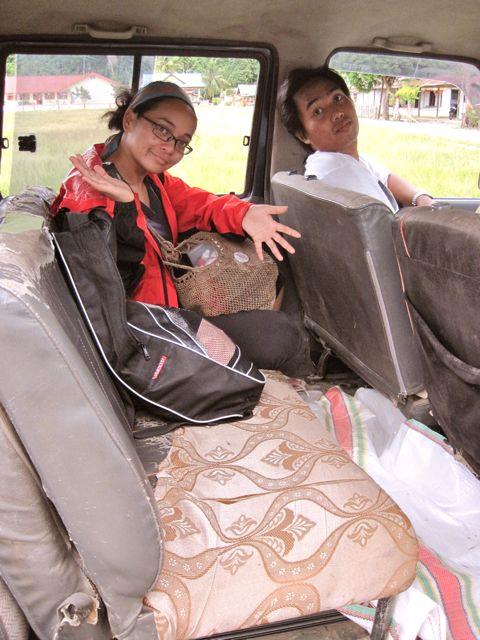 It’s another scenic ride to the Bada Valley. This time, we enjoyed Poso lake from a higher spot, tropical forests, cacao plantations, high elevated shrubs, mist, fresh crisp to cold air, the cola colored river, and valleys where you can easily get lost. It was eye candy being so 3D, seeing the depth and elevation of our journey. I just could wait to get to where the hell we’re supposed to go. Did I mention that I had to stretch my butt? ? 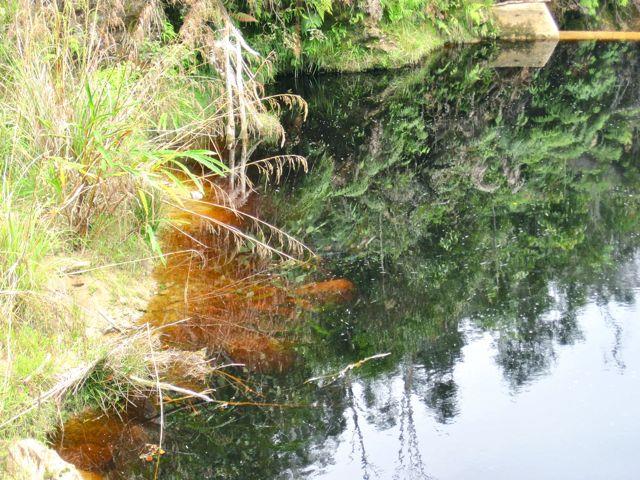 Pak Manaf was very nice and communicative. He would talk to us and to those passing by, literally. Cars apparently have this tradition to have small talks once they meet on the road. Of course, this was done amongst the locals, but between a small town like Tentena and Bada valley, you’d probably know everyone anyways. And from eavesdropping … I mean observation, there wasn’t much information trading. Just merely saying hi. A good habbit anywhere in the world. 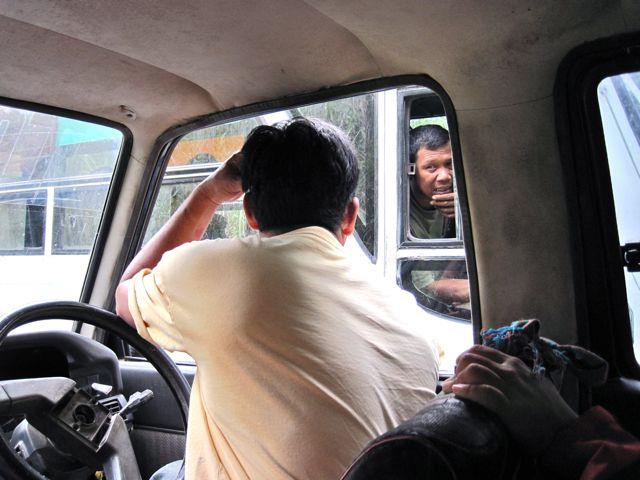 Pak Manaf also brought us to the ONLY warung or ‘traditional coffee shop’ you might say, on the road. We had a portion of Supermie, the Indonesian ramen, and a cup of coffee before heading out to our destination. The toilet and stove was made of the same thing… wood. 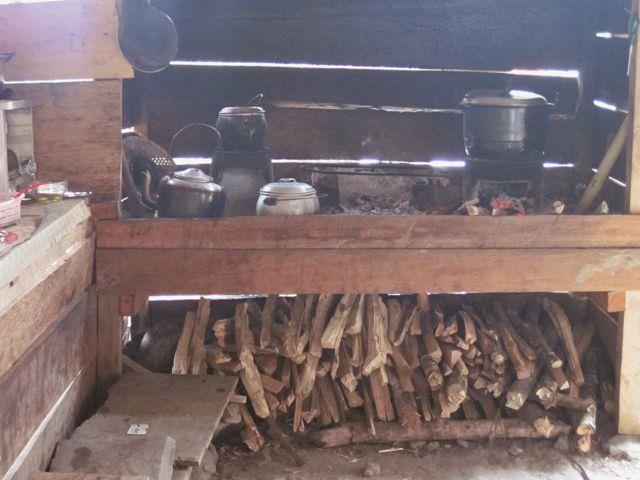 After going through a few hills, the valley finally presented itself to be vast, green and bowl like. Entering it, you could see the villages from such elevation, rice paddies, and green hills circling this valley. A post card view, really. 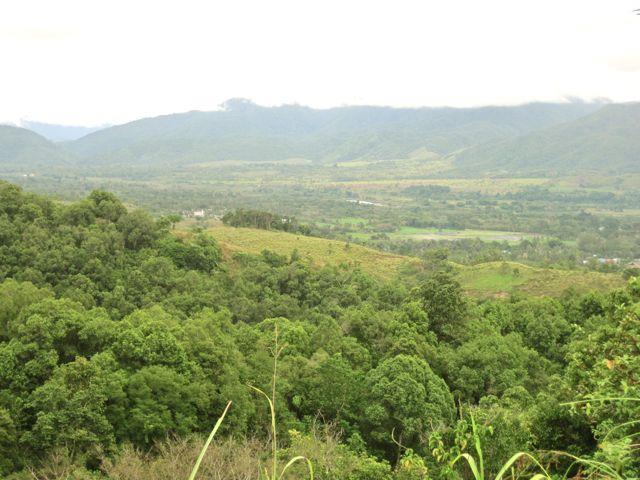 After Pak Manaf dropped us at the Ningsi homestay and promising us that he will pick us up the next day to go back, he went home. He does live in Bada and so we didn’t have to pay for his stay as the usual diver would. See, he was really nice.

We arranged for a guide from the Ningsi homestay. We were recommended one of the renowned guide of the area but we thought maybe it wasn’t necessary. Alright, we were trying to cut some budget and we thought his understudy would be enough. Too much at a time information isn’t good either. So eventually we went with Pak Riswan for IDR 100,000 for the 2 days were were there. And since we arrived at about 2 pm, we decided to start right away!

Pak Riswan wasn’t much of an information bearer, he was just the guide, who knew where the stones were. So we didn’t get much knowledge out of him. But a guide is necessary. It’s hard to find the rocks since they’re located in the middle of rice paddies, high grass, and the government isn’t really concerned about sign systems. There is a dodgy map on the wall of Ningsi, but it’s hardly traceable on your own.

However, we did get some information from the National Archeology team that was in town to dig up a site they just found. How lucky were we to meet such important people? They were a bunch of fun field workers, consisting of researchers and lecturers and phD students etc. It was a relief to see people still interested in history. And I felt I was in school again. 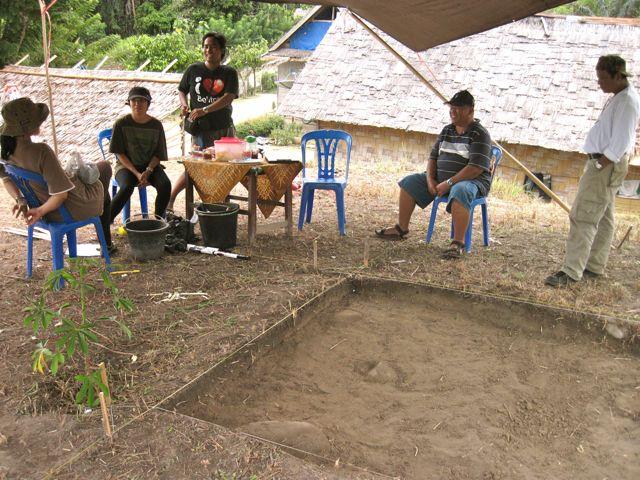 In general, no one knows exactly when the megaliths were made. Some estimated about the 12-14 century. It is the oldest megalith to date. But it was made to protect the people, as they face a certain area and is located on an elevated area.

Walking to my first megalith was a joy. We walked through the village, passed the rice paddies, and climbing slightly to a small hill. We just followed wherever Pak Riswan went, blindly. But even that walk was great. How could it not? All you can see is green and hills and space, and the sound of wind. 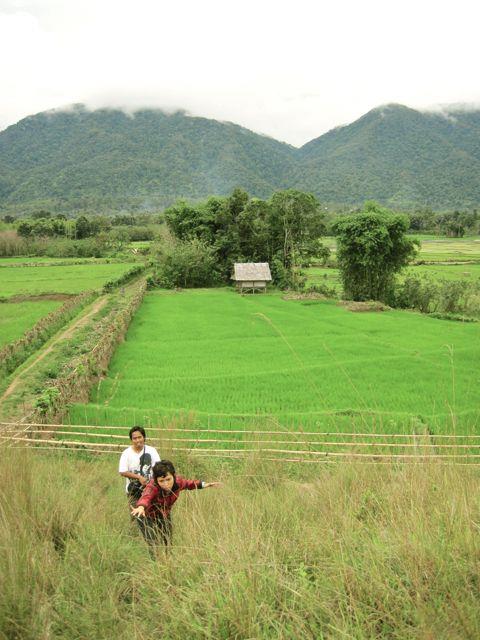 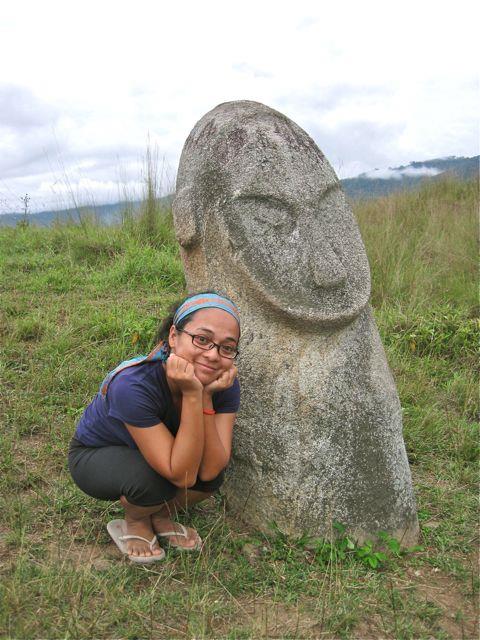 The second of the day was the female megalith located on the other side of town. We barely made it since it was getting dark and started to rain a bit. But we got there! And We got the photos to show you.

This megaliths was treated better, having a wire fence around it and a few traditional designed houses for people to store rice (the locked one) and one just to hang out. Out of all megaliths we saw, she was the only female we found. 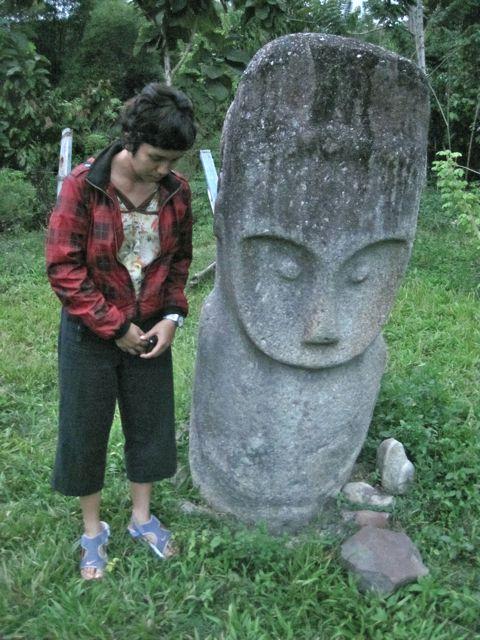 The next day we headed out to the rest of the stones. One of our favorite places of the ride is the old hanging bridge that wobbles more than jello. It’s a much fun bridge from mini adrenaline rushes. Great to wake you up in the morning. And it’s amazing how such a weak looking bridge could still cross 2-3 motorcycles at a time. 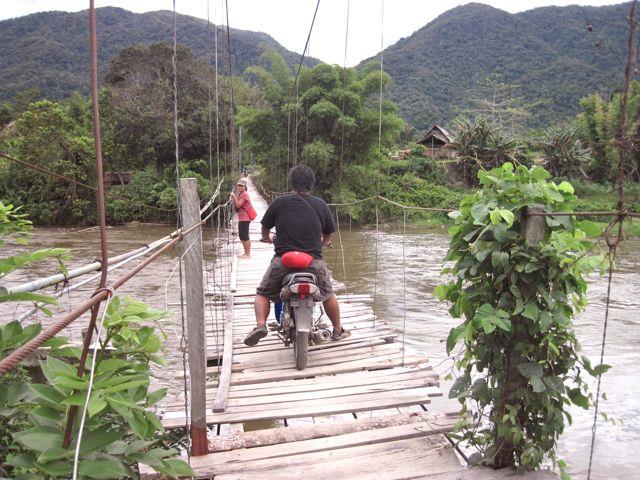 This megalith is the tallest one of the all. It raises a 4.5 m high, although it doesn’t seem so since it’s tilted. It is said that this statue is not in its original position since, in the past, the people of Palopo and probably Toraja disputed to take the rock back home. The rock was moved and turned. People… we shouldn’t be fighting over a rock now, should we? Especially if we can hardly lift it :p 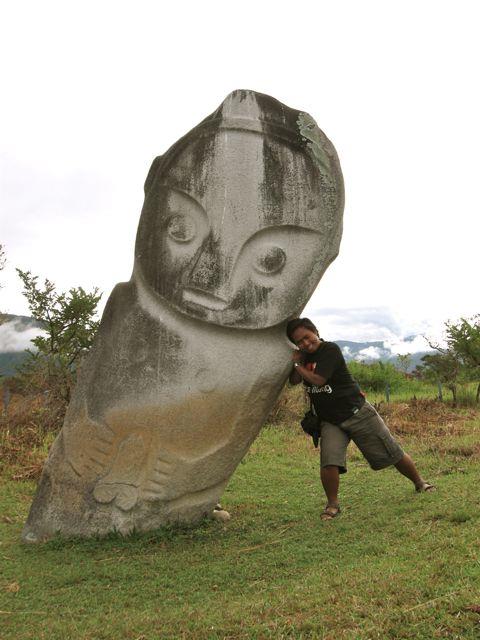 Palindo has a very cute face, a kid if I may say. Well, it’s holding its penis in public. If that’s not childish, its perverted and I don’t think it’s the later. The front part is smoothly carved, yet the back seems like it wasn’t even bothered. It’s located in the middle of an open area, making it quite amazing to see.

Palindo is the ‘entertainer’ megalith. Some say that it was the kings jester megalith having it once facing the Kings palace… hmm.. who knows *shrug 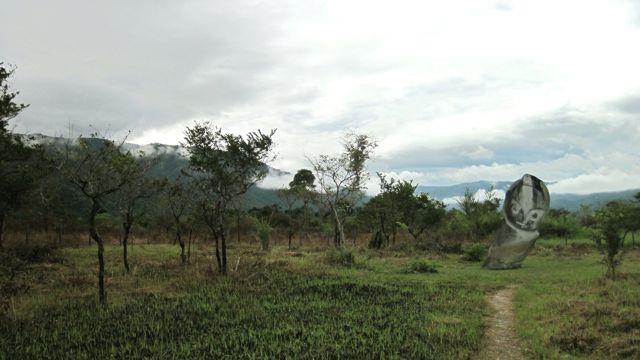 The sleeping megalith is located amongst high grasses and shrubs. We had to pass a muddy rice paddy, not a good idea wearing flip flops. Three quarter pants are also the question since we had to pass some dense thorny shrubs. Those things are really annoying. I had cuts on my leg as if I worked at the rice paddies. A compliment should it be true ? 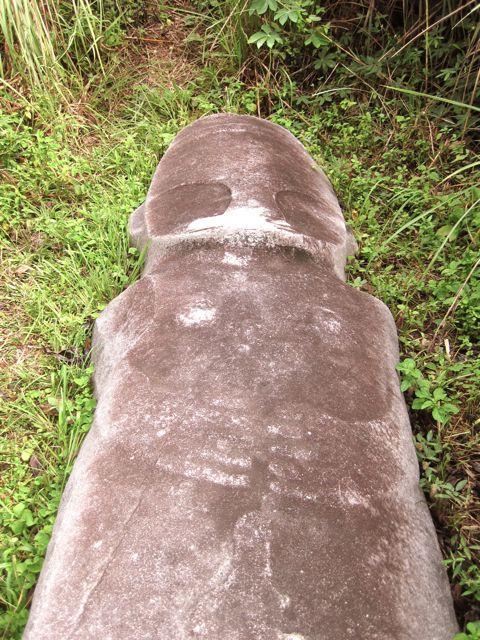 I forgot what this one was called. What was said of it was that it is a slave megalith. The people identified it by the hole in the head. Slaves were said to have no brain, hence the hole. It does look sad, having the face smothered in the soil.

But there’s another version of the story. This megalith is also said to be a princess. When she chose her peasant lover over her royal family, she was ditched and the statue was made with a hole on her head, symbolizing that she had no brain, making such a fool decision. This is a version that Vira heard from Debby, who has hosted quite a lot of historians from Europe in Victory Hotel. 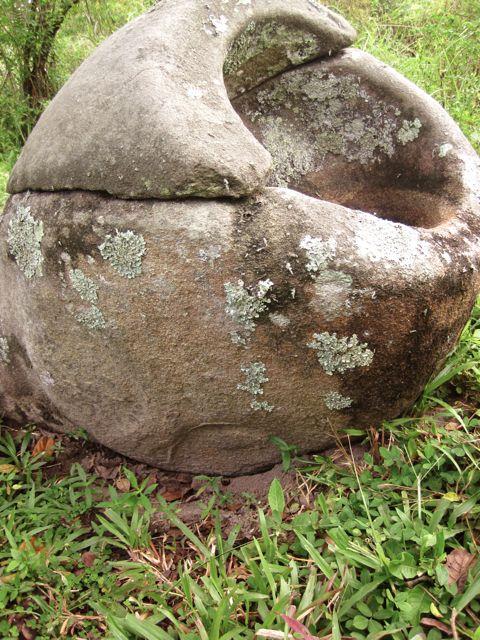 There are some giant rocks that were identified as musical instruments. This one is the drums. Indonesian drummers, come meet the ancient device of your liking. I wonder how you beat it to make music, don’t you get a smacking sound of the pain in your hand? 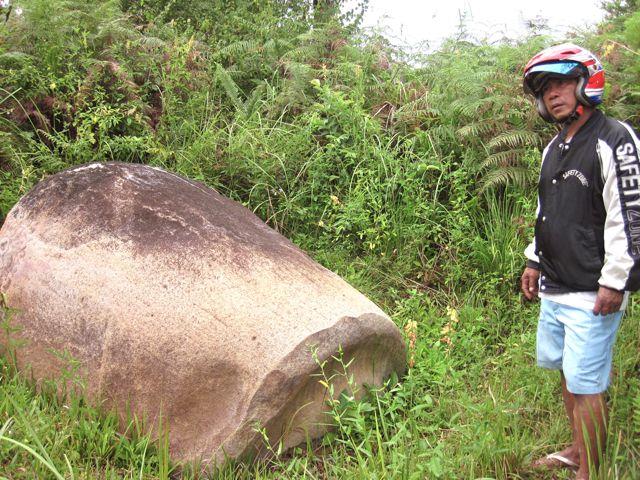 There were a few Kalambas that we saw during the whole tour. Kalambas are said to be bath tubs for the royal family, or those that are important. There is even one with a separator for the mother and baby of the royals. 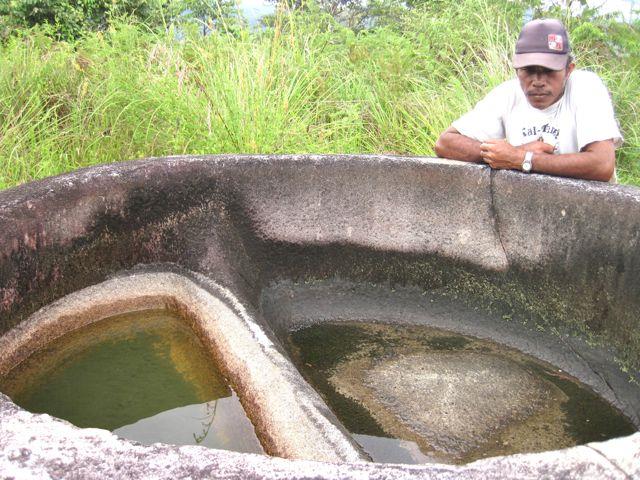 This is the monkey megalith. It does look like a monkey compared to the other megaliths. It’s shorter and has a monkey face according my imagination. But Vira said it looked more like Sinchan, a famous obnoxious Japanese cartoon character.. hehehe. It’s located in one of the rice paddies, with only a short walk away. In this megalith, we finally decided to do the ‘muhaha’ dance, the dance where you can laugh ‘muhaha’ the evil way and dance away. And what a joy that Pak … was willing to join in when we invited him. Now by this point, I concluded that I didn’t care if we didn’t get the dates and info of the rocks, it’s the dance that matters. And though we got more info from our ojek driver, Pak Sahrir, I’d take a guide like Pak Riswan anytime muhahahahahaha…. 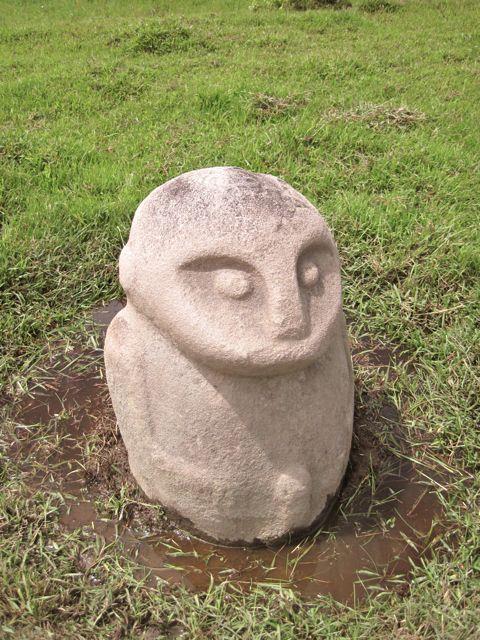 We did stop by the rice paddy keeper’s house before visiting Oba. I took a peak in his house and it was surprisingly pleasant. It was strong, spacious, ventilated of couse, and livable. Yeah sure, it’s no place to say during cold nights, but you can always cuddle up with your family.

Visiting the Oba here and walking through the rice paddies make me think that we did travel back in time. There was not telephone signals and everything was back to the old days. Houses was even still made of bamboo. A very nice feeling.

After the Oba and having much fun with it, we headed back. We headed through a different route to then find a mini megalith that was placed in the middle of the town as a symbol. Looks pretty nice. This was said to be the head of Loga’s cheating spouse, that’s why its head was chopped off, and they are facing each other. Who knows. 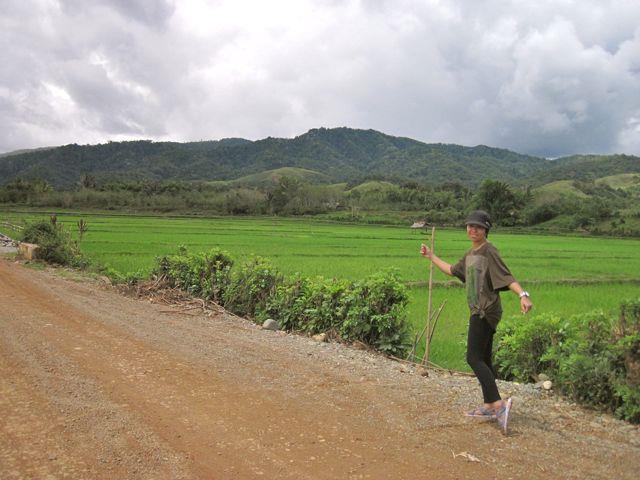 By the end of the day, we had sun burns from the walk amongst the megaliths. It was cloudy and we were careless of not using a sunblock. But we did have a great time. Personally, standing near the Palindo, surrounded by green hills and tropical forest and meadows and rice paddies in the middle of nowhere, was an achievement. I traveled far to see remains of the traditional people. And although it’s been visited more by International visitors, I’m proud to be the very few Indonesians that went the distance. I will urge anyone to see these rocks, not only for the cultural value, but more to see the humble people of Indonesia living in remote areas and far from being commercialized.