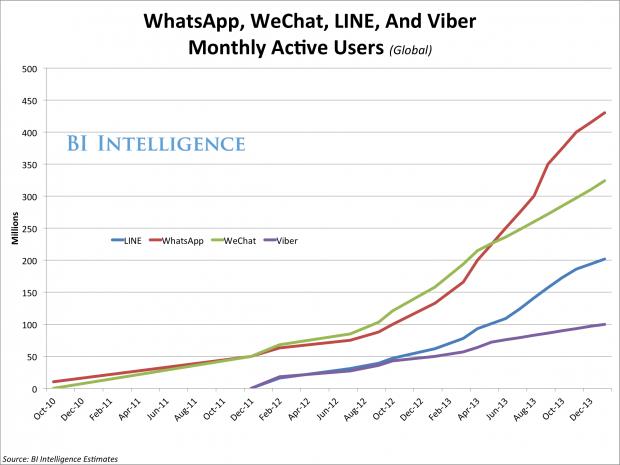 Viber, the mobile messaging app just acquired by Japanese e-commerce giant Rakuten for $900 million, allows users to share images, video, audio, and text messages. The service is a direct competitor to other mobile messaging apps, such as WhatsApp, LINE, and WeChat.

BI Intelligence took a look at the growth rates of these apps to get a sense of how they stack up. Our estimates are based on a compilation of company announcements, media reports, investor presentations, and market data.

Here’s how Viber stacks up against its competition:

So what purpose does a mobile messaging app serve for an e-commerce giant?

In the press release announcing the acquisition, Rakuten said “Viber’s range of customers” will strengthen the company’s other services. Rakuten is clearly viewing Viber as a way to attract smartphone users to its shopping sites.

Rakuten’s merchants could potentially use Viber’s messaging services to interact with millions of consumers, and announce offers and discounts.

The $900 million price tag that Rakuten paid for Viber now establishes a benchmark to value other fast-growing messaging apps.