The moment Apple geeks were waiting for arrived this morning with the launch of the iPhone X aroudn the world. The new phone went on sale and was greeted by huge crowds outside Apple stores in some Australian and Asian cities. What a difference a month makes when we reported in “This Is Embarrassing”: 2 People Show Up For iPhone 8 Launch in China.

Fortunately for Apple, which yesterday smashed expectations and reported strong guidance, the iPhone magic appears to be back as the Wall Street Journal reports:

Long lines outside of Apple Inc. AAPL 0.73% stores around the world showed strong initial demand for the new iPhone X, but analysts said the real test would be the company’s ability to sustain that level of interest over the coming months as it works through supply bottlenecks. Sales of the iPhone X began Friday, and hundreds of customers lined up in Australia and Singapore, aiming to be among the first in the world to get their hands on the most expensive iPhone ever, with a starting price of $999 and features including an edge-to-edge display and a facial-recognition system. It wasn’t clear how many units Apple would have available for first-day sales. At an Apple store in central Sydney, lines snaked around the corner midmorning local time, despite the store opening at 8 a.m., an hour earlier than usual, to cope with expected demand.

Half way around the world, CNET reports on the Sydney launch.

Apple’s flagship Australian store in Sydney was the first in the world to sell the new iPhone, and early birds were queuing since the start of the week to be able to buy it off the shelf. First through the doors were Sydneysiders Bishoy Behman, who’d been queuing for a week to buy the iPhone and who livestreamed the event on his iPhone 8 Plus, and Mazen Kourouche, who queued from Friday morning after preordering “literally the minute” orders opened last week. So why buy the iPhone X when you have a weeks-old device in your hand? 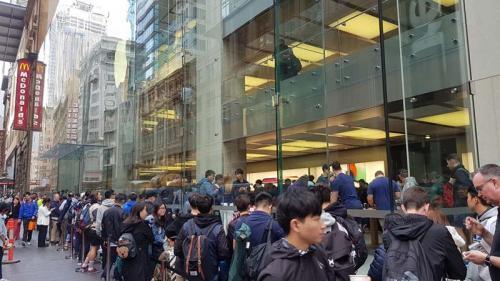 “It’s the new iPhone. It’s a new generation,” said Behman, who bought one 256GB iPhone X for himself and one to sell. “I’m excited for this. The 8, not so much.” A software engineering student and part-time tech blogger, Kourouche did an unboxing for me in the store. “The notch doesn’t seem to be intruding,” he says, referring to the black section at the top of the screen. “I’m going to have to get used to no home button.” Next to him, 19-year-old Chinese studies student Jesse Goodwin plays with the Face ID he’s just set up, but he has some doubts. “When I’m in China, I wear a face mask so I won’t be able to unlock the phone.”

This was Reuters photo from inside Sydney’s Apple store moments after the launch. 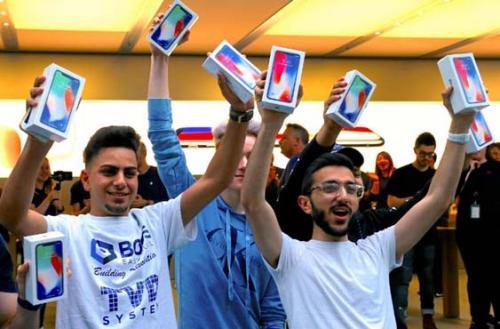 Rain didn’t dampen the spirits of Apple fans in Singapore, who queued to buy the iPhone X from the sole Apple store in South East Asia. Queues started early, with 52-year old Singaporean homemaker Ala Ahmed telling CNET she’d been waiting since 6.30 a.m. Thursday to get four iPhones for her son and his friends who were away serving their national service. But others came from much further afield. Kittiwat Wang and Supakorn Rieksiri, two 22-year-old students from Bangkok, Thailand, preordered their iPhones online and flew to Singapore to pick them up. The two friends said devices get to Singapore much earlier than Thailand, making it worth the short flight. Further down the queue, student Christine Nguyen, also 22, came from Vietnam with four friends for launch day, saying she’d waited for the iPhone X because the iPhone 8 hadn’t seemed too different from earlier models.

CNET reported that the first buyers in Singapore were two 22-year old students who had flown in to Singapore from Thailand, having pre-ordered online. 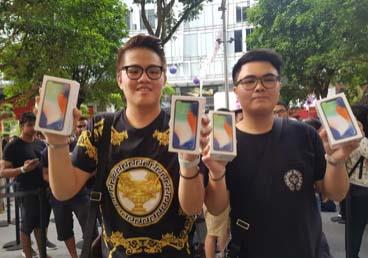 This was the crowd outside Apple’s Orchard Road store in Singapore, courtesy of Channel News Asia. 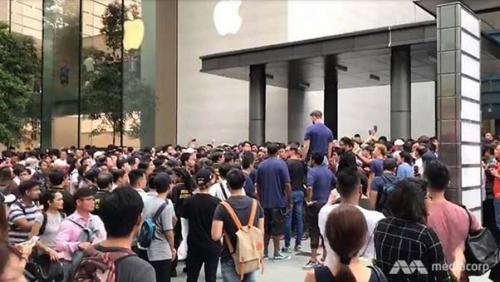 In Tokyo, the story was similar CNET reports.

Japan was hyped about the iPhone X as well, as lines at the Apple Store in Shibuya district in Tokyo stretched to at least two streets away. Apple has a considerable fanbase in Japan, so it was no surprise to find that there was huge interest in the new phone.

The WSJ had a photo of Apple employees preparing to give high fives to the first customers entering the store. 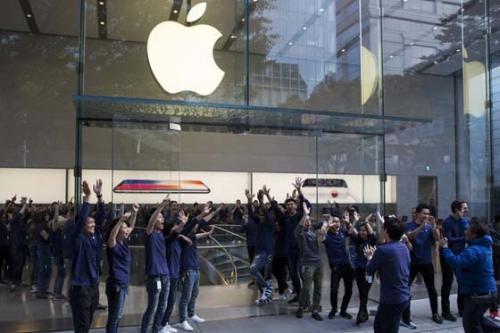 The five Apple stores in Beijing diluted some of the hype at the each store:

Over in Beijing, queue lines at the Apple Store in Sanlitun weren’t as crazy long as they were in Japan. With five different outlets in China’s capital city, Apple iPhone X buyers were more spread out. Still there was plenty of enthusiasm for the new phone from those in line. Serial Apple queuer Lloyd Yu, 31, who works at a startup, was first in line since 5 a.m., and got two 256GB iPhone Xs in Space Grey. He already owns an iPhone 8 Plus and wanted to upgrade because he’s a big fan of Apple. “Everything Apple does, I accept, because everything Apple designs, is the best,” said Yu, adding that he’s also looking to try out Face ID. Yu, who’s apparently a familiar face to Apple employees, was seen hugging and chatting with staff. By the time he left the store, surprisingly, the queue lines seemed to have grown larger compared to earlier in the morning, a response that’s considerably better than Apple’s iPhone 8 lacklustre launch. 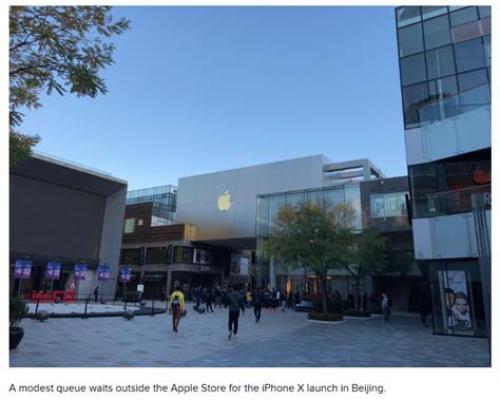 In Hong Kong, the WSJ reported that sales of the new phone were immediately taking place on street corners by traders who had made multiple purchases. 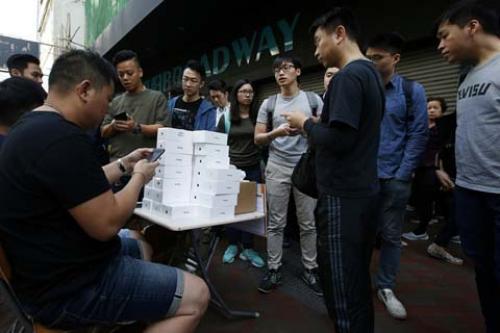 Finally, as the Journal noted, even Apple can’t please everybody with the X. In Hong Kong there was a protest outside the Apple store regarding the working conditions at some of the company’s suppliers. 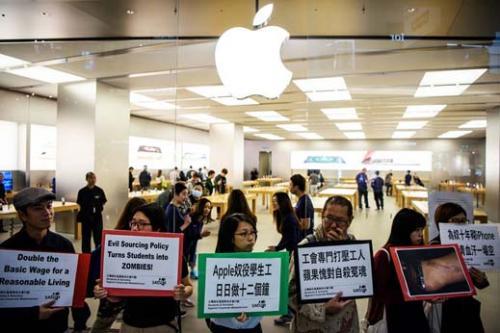