H1 NMR analysis and calibration. Figure 2 is an example of an NMR spectrum of α-lactose monohydrate powder, containing an insert of the region of interest 6-7 ppm where the α and β proton peaks occur, on a larger scale. The α and β protons are the most deshielded atoms in the lactose molecule because of their position with respect to a neighboring electronegative oxygen atom. The distance between the α proton and the oxygen atom is also greater than the distance between the β proton and oxygen atom. Therefore, the respective protons exist in slightly different chemical environments, which also accounts for the α and β protons of the α-lactose monohydrate sample appearing as two separate peaks found in the farthest region (6.2-6.7 ppm) (1). 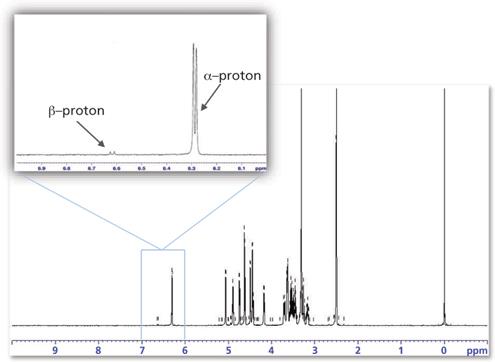 Because of the nature of the NMR experiment, the α and β peaks appear split depending on the number of adjacent hydrogen atoms (referred to as n). Peaks are split by n + 1; therefore, in this case, both peaks are split into doublets as a consequence of the adjacency of one hydrogen atom. The relative intensities of the integrated α- and β-proton peaks were calculated and the anomeric content was determined for α-lactose monohydrate and β lactose at day zero (n=5). The purchased sample of α-lactose monohydrate was found to contain 98% ± 0.16% w/w α-lactose and 2% ± 0.16% w/w β-lactose. In contrast, the sample of β-lactose powder contained 16% w/w α- lactose and 84% w/w β-lactose, with the standard deviation being 0.29%.

Different mixtures of lactose powders (α-lactose monohydrate and β-lactose) were analyzed by NMR to generate the calibration graph shown in Figure 3. Five percent of the weight of α-lactose is water and approximately 20% w/w of the β-lactose powder is known to be α-lactose (11); thus, the calculated value for the percentage of the  α anomer was determined using the Equation 1:

The weight of the water present in lactose was determined using thermogravimetric analysis (TGA). The weight loss corresponding to the water loss detected by TGA was 4.97 ± 0.34% w/w (n=3). The α anomer content present in the β-lactose was found to be 16.3 ± 0.22% w/w by NMR. Using these data, the calculated α anomer composition was determined and used as the independent (x) axis. The NMR data derived from the mixtures of lactose samples were plotted as the abscissa values. As shown in Figure 3, the R2 value (0.992) is strongly indicative of the linearity of the NMR analysis. 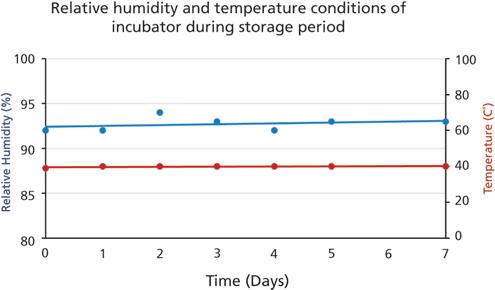 Figure 4: Relative humidity and temperature conditions of incubator measured using a traceable hygrometer/thermometer during a week-long stability study to investigate the changes in anomeric content of lactose.

Stability study. Constant temperature and relative humidity were maintained during the seven-day experiment (Figure 4); the values upon daily monitoring being 40.0 ± 0.5 °C and 93 ± 0.7% RH (with an instrument accuracy of ± 3%).The β-lactose sample changed markedly in composition as a function of time. The original sample, which contained 16% w/w α-lactose and 84% w/w β-lactose was transformed and after seven-day storage, was found to comprise 48.5% w/w α-lactose and 51.5% w/w β-lactose (Figures 5 and 6). The increase in α-lactose content was found to be a (R2 = 0.97) linear function of time (slope 4.7%/day). 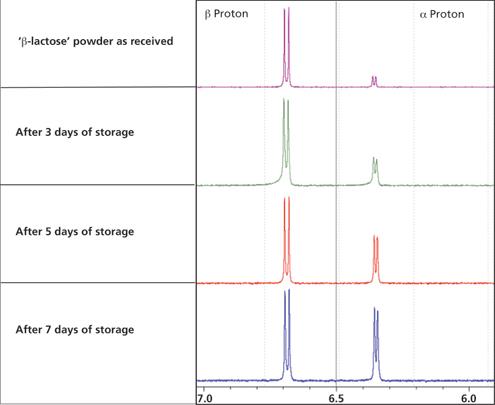 Figure 5: An overlay of nuclear magnetic resonance (NMR) spectra for ‘β-lactose’ powder, stored for up to one week at 40°C and 93% relative humidity (RH), showing the progressive change in anomeric content of the samples (x-axis = ppm and y-axis = signal intensity). Representative spectra for ‘β-lactose’ as received, after three, five, and seven days of storage were selected to illustrate the change in anomeric content of powder after incubation. The intensities of the samples were normalized for this figure.

In contrast, the composition of the α-lactose monohydrate sample did not change throughout the seven-day storage period (Figure 5). The mean α-lactose anomer content during storage of the sample was 98.4 ± 0.15%. The R2 value was 0.53 indicating that the data points were randomly distributed around the mean, suggesting a small variation due to the NMR experimental procedure. 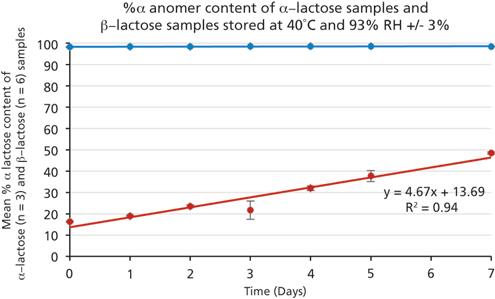 Figure 6: α-lactose content of α-lactose (n=3) and β-lactose (n=6*) samples stored for up to one week at 40 °C and 93% relative humidity (RH). The blue trace represents the %α anomer content of ‘α-lactose monohydrate’ and the red trace shows the α-lactose content in the ‘β-lactose’ samples. *n=4 at day 3 due to instrumental error. **Error bars calculated using standard deviation. 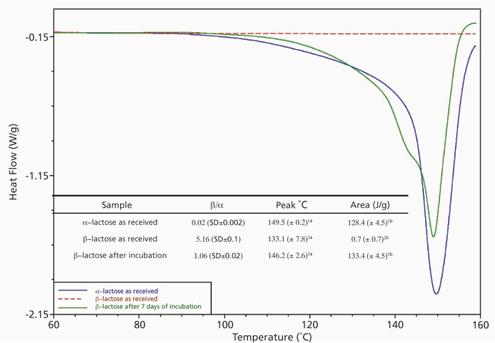 It is well known that amorphous lactose is an unstable form of lactose that changes into the more stable crystalline lactose, and some of the conditions that affect this process have been identified (17). In previous studies, however, there have been misidentified changes in the anomeric composition of specific samples of lactose that have been incorrectly described as polymorphic changes (18, 19). In addition, the monitoring of the anomeric interconversion of lactose and the presence of different forms during compression have also been neglected; issues with caking could be minimized if such aspects were investigated (19).

The aim of this study was to investigate the effects of high temperature and humidity conditions on the anomeric composition of lactose powders, using H1 NMR. This method requires the solid lactose samples to be dissolved in solutions of DMSO prior to analysis. It is important to establish that mutarotation within these solutions is minimized for the length of the NMR experiment (1, 7, 20).  Previous work by the authors has shown that mutarotation of lactose is inhibited for up to 20 min in DMSO due to the aprotic characteristics of the solvent (1). Accordingly, all spectra were derived within this timeframe. The analysis carried out has allowed the unambiguous determination of the anomeric content of lactose samples before and after storage under high stress conditions (21).

In this study, the anomeric content of α-lactose has been shown to be stable even when stored under such extreme ambient conditions, when water sorption might be expected to occur (12). It has been reported previously that, in solution, the anomeric content of lactose equilibrates at approximately 37% α-lactose : 63% β-lactose (1, 7). Moreover, a study by Lefort et al. using non-crystalline lactose suggested that the anomeric ratio equilibrium in solid state is different from the equilibrium that occurs in solution, for example, when heated (up to 160 C) samples of solid amorphous lactose were found to undergo mutarotation and equilibrate at 50% α-lactose : 50% β-lactose (22). In the same study, crystalline lactose was shown not to display mutarotation (22), but these experiments were conducted under low and uncontrolled humidity conditions.

The current study established that the α-lactose sample maintained its original anomeric content under the predetermined extreme conditions, whereas the β-lactose did not. Initially, it was assumed that there would be no change in composition of either sample, as lactose powders have been previously considered chemically stable (11). The hypothesis to account for the transformation that occurred in β-lactose is that the water vapor in the immediate surroundings of the lactose sample condensed and pooled on the surface of the powder mass, thereby creating a saturated solution, which resides on the particles’ surface. In this saturated solution, the anomeric composition would be expected to approach the equilibrium state observed in aqueous solution.