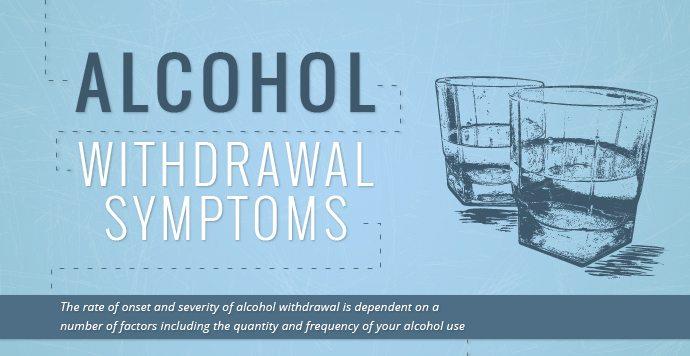 | By admin | Posted in Blog

Addiction is a very dangerous disorder for one to incur. It disrupts physical and mental health and can be emotionally exhausting as well. Withdrawal occurs when a person who is psychically dependent on alcohol reacts to a sudden absence or a massive decrease in the amount of alcohol they are consuming. This creates a variety of symptoms that occur as the body reacts to functioning without the alcohol in its system.

Withdrawal Can Be Frightening And Dangerous

I’ve seen first-hand the toll that this can take on a person. I once had a dear friend, Peter (real name withheld) who suffered from a severe alcohol addiction on and off for the majority of his adult life. Peter wanted nothing more than to be sober, but he was too stubborn to seek help and thought he could do it on his own.

Periodically I would visit him, and I always knew when he hadn’t had a drink in a while because his hands would shake. One Thanksgiving, when he accompanied me to my family’s dinner, he had to drink from a tiny bottle of wine in the bathroom so his shaking hands wouldn’t give him away. This was one I knew that things had gotten severely out of control. Peter quit cold-turkey many times, but as his drinking intensified, the risk and danger of this increased.

Once, I had spent an afternoon visiting with Peter and talking about his pursuit of sobriety. He had been buoyant and hopeful—he seemed genuinely passionate about becoming sober. I didn’t realize that he had already quit drinking. The last thing I remembered before everything changed was Peter hanging out his back door, waving goodbye, his face split open in his characteristic wide grin. I remember leaving and feeling hopeful too. Less than an hour later his wife called me to tell me that he had passed out, was vomiting and that he was having seizures on their living room floor. 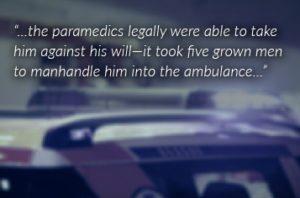 When I arrived, Peter was conscious and begged me not to call 911. I did anyway. He was soaking wet—he had lost control of his bladder. His emotions were all over the place, he was irritable and yelling at the paramedics, his wife and me. Peter was worried about the money, he didn’t have insurance—and because of this he refused to let the emergency personnel assist him—he kept trying to run away from them and swat them off him—that was until his blood pressure spiked so high that it was in the stroke range. At this point the paramedics legally were able to take him against his will—it took five grown men to manhandle him into the ambulance and get him to the hospital.

The good news is is that Peter received proper medical care and attention in a timely manner and he didn’t have a stroke. The events of that afternoon were so shocking that they woke him up to the dangerous reality of the situation. This paired with the medications and counseling that he received at the hospital and during his after-care, helped him get to a place where he could take careful and mindful steps towards sobriety. Peter received the treatment and rehabilitation that he needed to help him protect his sobriety and have a lasting recovery. Here, at Turning Point, we can support you in getting the help you need before things go this far.

What Are The Symptoms Of Alcohol Withdrawal?

The greater the quantity and frequency of your alcohol use, the greater chance that you will suffer from alcohol withdrawal when you quit drinking. Withdrawal may be minor or major, and is dependent on the aforementioned factors. The rate of onset of alcohol withdrawal is also dependent on these things, and can occur as early as six to eight hours after a person consumes their last drink.

Here are the most prevalent symptoms of withdrawal:

When a person stops drinking after drinking heavily for a prolonged period of time, withdrawal can cause seizures, and in the most severe of instances, what is called delirium tremens (also called DTs). MedlinePlus states, “Symptoms most often occur within 48 to 96 hours after the last drink. But, they can occur 7 to 10 days after the last drink.”

According to MedlinePlus, DTs “involves sudden and severe mental or nervous system changes” and are classified as a medical emergency, due to the fact that it can progress so severely that it can cause death. A Medscape article cites that “About 30-40% of patients with alcohol withdrawal seizures progress to DTs.” According to a study published by the National Institute on Alcohol Abuse and Alcoholism (NIAAA), “The mortality rate among patients exhibiting DT’s is 5 to 25 percent.” The good news is that quick and proficient medical support aided by the administration of medications and advances in treatment can reduce this risk of death.

During withdrawal, fatalities can result in other ways too. During a seizure, a person may aspirate their vomit or hit their head while they’re convulsing. The following symptoms are the most severe, and may be indicative of delirium tremens.

If you even suspect that yourself or someone you love is encountering withdrawal, or has DTs, seek medical help immediately.

We Can Help You To Safely Detox And Withdrawal

Withdrawal from alcohol can be very dangerous and life-threatening, it is something that you should never attempt on your own. Here at Turning Point, we offer expert and compassionate care that can help to ease the uncomfortable symptoms that may arise and protect you from the dangers that could occur if you were to do this unaided, or “cold turkey.”

We offer safe and medically-supervised detox in a hospital setting. Our medical staff will be there to observe and support you around the clock, to ensure that your symptoms are managed safely with the unparalleled medical care and treatment that our program offers. Withdrawal can be an emotionally draining process. Our staff is trained to help aid and comfort you in dealing with this, in addition to alleviating and treating the physical rigors of withdrawal.

For the benefit of your health and future, we want you to be sober as soon as possible, but we understand the necessity of undergoing planned withdrawal and detox with critical care and support. At TurningPointTreatment.org, let us educate you on our expert and compassionate care so that you can find sobriety, the safe way. Please contact us today, we are here to help!