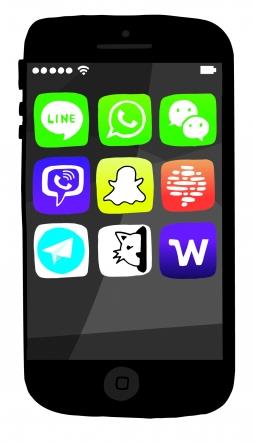 WHATSAPP About: WhatsApp is ubiquitous in places like the Netherlands, Spain, South Africa, Brazil and Mexico. It has robust group-messaging functionality and allows users to share video and audio clips. Facebook is paying $19 billion for it. Users: 465 million monthly users; 330 million daily users. Business plan: It generates revenue on a subscription model by charging 99 cents a year after an initial free year. It has eschewed advertising, and Facebook CEO Mark Zuckerberg said he doesn’t think ads are the right way to monetize messaging. The stated intention is to focus on product development and user growth rather than opening up new revenue sources.

WECHAT About: WeChat is making a global push. Users can play games and scan QR codes with the app; they can also shake their phones to chat with strangers. Users: Weixin (its name in China) and WeChat collectively have 355 million monthly users. There are 100 million registered accounts outside of China, but parent company Tencent doesn’t report on how active they are. Business plan: WeChat makes money from the sale of stickers—essentially embellished emoticons—and in-game purchases. Though it allows marketers to create profiles, WeChat limits how often they can reach users with messages. In China, it offers online-payment services and banking, and it’s getting into e-commerce.

VIBER About: Viber is a competitor to Skype as well as WhatsApp because of its advanced internet-based calling technology. It was acquired by Japanese e-commerce giant Rakuten for $900 million in February. Users: More than 300 million registered users with a global footprint. Business plan: Nascent until Rakuten came long. The intention is for Viber to be integrated so that it can funnel more customers to Rakuten’s businesses.

LINE About: Tokyo-based Line is considered a regional powerhouse, and the biggest share of its user base is in Japan. It also has significant reach in countries like Taiwan, Thailand, Spain and Indonesia. Users: 380 million registered users. Business plan: Line generated 12.2 billion yen in revenue in the fourth quarter (about $120 million). About 60% came from games, while another 20% came from user purchases of stickers. The balance came from sponsored brand accounts and stickers.

TELEGRAM About: Positioned as a more secure alternative, Telegram offers end-to-end encryption and also supports self-destructing messages. Users: In a period of hyper-growth since launching last year. It said on Twitter that 4.95 million people joined on Feb. 23 alone. Business plan: None. It’s a nonprofit run by Pavel and Nikolai Durov, founders of VK, the Russian answer to Facebook.

KAKAOTALK About: Primarily used in South Korea (where the company is based), Japan, Indonesia, Malaysia and the Philippines. The majority of the top-grossing apps in South Korea for both Android and iOS originate from the Kakao platform, per App Annie. Users: 140 million registered users. Business model: Kakao makes money through in-app purchases, e-commerce, stickers and official accounts from celebrities, business and community groups that can broadcast their messages to users. Revenue for 2013 was anticipated to be about $200 million but hasn’t been formally announced.

TANGO About: An app for messaging, games and voice and video calls. Last week it raised $280 million in a round led by Chinese e-commerce giant Alibaba, which put in $215 million. Users: 70 million monthly users; 200 million registered. Business: Has in-stream ads that look similar to Facebook news-feed ads. Advertisers have included King, Zynga and Match.com. It also gets a cut from developers who make apps for Tango.

SNAPCHAT About: Millennial-skewing users can send photo and video messages that recipients view for up to 10 seconds before they vanish. Users: As of November, 400 million “snaps,” or messages, were being sent per day. The company hasn’t disclosed how many users it has. Business plan: Snapchat doesn’t make any money, which made its spurning of Facebook’s $3 billion acquisition offer more curious. Brands like McDonald’s, Taco Bell and Wet Seal have tested organic messaging on it.

CONFIDE About: Confide is effectively Snapchat for professionals, with messages that vanish after the first reading. It’s designed to be screenshot-proof, since users can only read a few words at a time by dragging their finger across the text. Users: Undisclosed. More than half of downloads are from overseas. It launched in January. Business plan: Nothing locked down. The founders have suggested there’s potential in a premium offering where users get additional services for a fee, à la LinkedIn.

WHISPER About: Whisper lets users post messages overlaid on an image background with complete anonymity. It features the most popular by default. Users: “Millions,” per CEO Michael Heyward. Ninety percent are between 18 and 24, and 80% are in the U.S. Business plan: Last year it tested charging users for private messaging. More recently, it’s done ad tests with Universal Pictures and Hulu for promoted “whispers,” as well as sponsored image backgrounds for user whispers.

SECRET About: Its users connect to people in their contacts list and can see whether a friend has sent a given message — though they won’t know which friend. Users: Undisclosed. Business plan: Undisclosed.