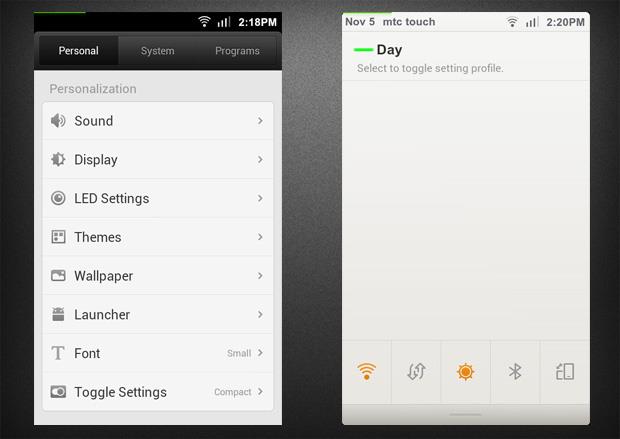 When it comes to community-developed custom ROMs on Android, there are two contenders that you will hear people talk about a lot more than any of the rest: CyanogenMod and MIUI. I previously reviewed CyanogenMod stating 10 of its great features and 5 tricks to improve on its shortcomings.

Despite how much I loved CM7, I have decided to give MIUI a go, and have been running v1.09.16 for over seven weeks on my HTC Desire Z. In the following review, I will share with you my findings, stating the reasons I have loved MIUI and those that are making me consider going back to CyanogenMod.

If, after a couple of months with Android, the black backgrounds and white text in all of the menus start to get on your nerves, then MIUI is exactly what the doctor ordered. It’s gorgeous. And yes, it looks a bit like the iPhone, but that is far from a bad thing. The tabs are cleaner, and all options menus in applications look revamped, easier on the eyes and just plain beautiful. Try to go back from MIUI to a regular Android installation and you will scream tragedy.

One of the first improvements on stock Android that you will see in MIUI is the lockscreen. It looks different, and finally brings a host of much needed features. Missed calls and new messages are easily accessible from it, even giving you the option to long click to enter the Dialer or the Messaging applications. The lockscreen can also show you a music player widget if you are playing music, and a long press on the home button while locked will launch the flash light. The fact that all of these are accessible without even unlocking your phone is a major benefit. 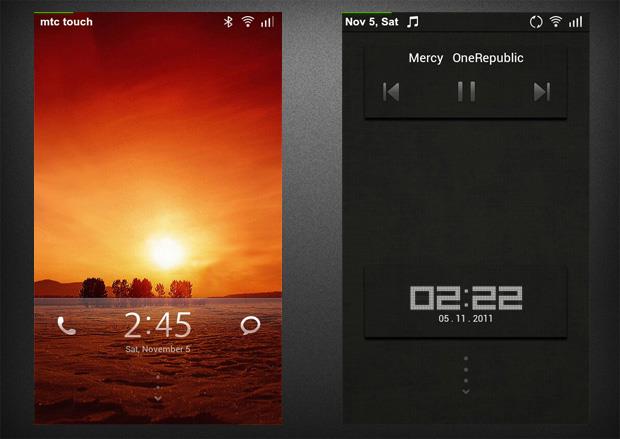 If you have tried CyanogenMod and thought that it was customizable, think again. MIUI brings the concept of themes to a whole new level. You can browse and download from a great collection of themes that change the look of everything on the device: lockscreen and homescreen with their wallpapers, icons, status bar, fonts, messaging application, dialer and contacts, boot animation, and even sounds such as the boot audio, ringtones, notifications and alarms.

However, the awesome part isn’t any of these, but the fact that you can mix and match any elements of any theme in order to get a unique look that fits your needs. You might for example prefer a black status bar and drop-down, but white Dialer and Messaging applications. And if you feel that MIUI is too iPhone-like out of the box, these themes and the level of customization help deter that idea. 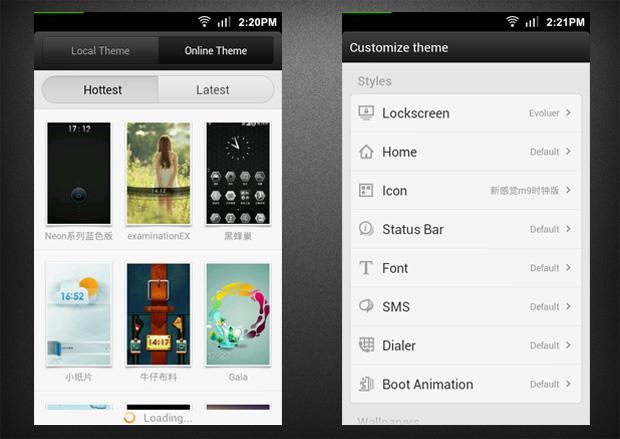 We tend to often forget it: our Android smartphones are still “phones” underneath all the shine, and the calling feature is quite important. MIUI brings a T9 predictive dialer, which stock Android unbelievably still lacks, with an integrated call log. The Contacts application is also revamped, looking much cleaner, with multiple lines support for email and web addresses, so they don’t look truncated like on stock Android.

It even integrates the call log, and for the first time on an Android ROM, you can actually add a person to a group and manage your groups with them synchronizing back to Google Contacts (correct me if I’m wrong, but there is no way to do that in the stock Android ROM). 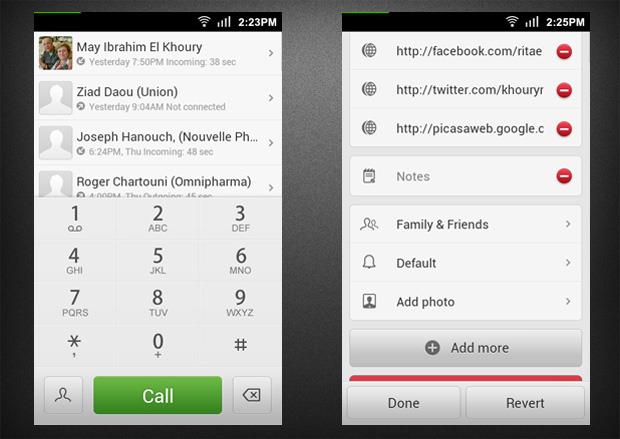 Another improved application on MIUI is the Music Player. As a matter of fact, it is so awesome, it exists as a separate application for other ROMs. And what makes it so special, I hear you ask? Aside from the gorgeous UI, it can automatically download album art and lyrics for all of your songs. The fascinating part though is that it can play these lyrics, like a karaoke machine, in sync with the music, in the player itself and in its homescreen widget. Sweetness! 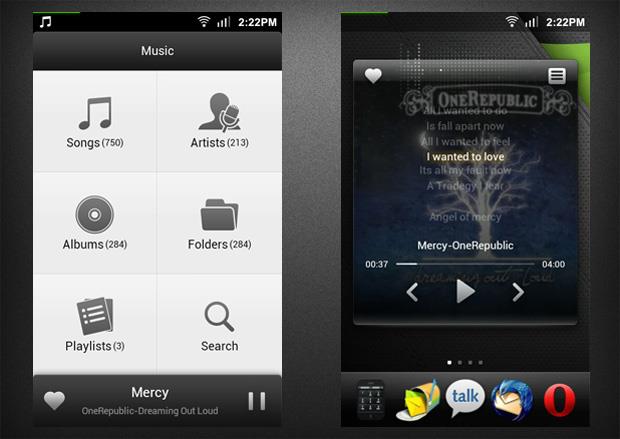 While stock Android users have to wait until Ice Cream Sandwich to get built-in screenshot ability, MIUI has had it for quite a while. Press the Menu button and volume down at the same time, and – ta-da – a screenshot is taken and saved to your SD card. Useful for when you want to brag about your latest homescreen setup or show a friend a cool new application or game.

MIUI offers a couple of ways to manage your background applications. First, when leaving an application, you can long-press on the Back button to totally quit it and not just leave it in the background. Second, when you long-press the Menu key to view your most recent 12 applications, MIUI shows a highlight around those that are still running and gives you an App Killer option to terminate all background processes and free some RAM.

This is also one of the promised features of Ice Cream Sandwich, but if you don’t want to wait for it, you can already get it in MIUI. It has an integrated monitor for your data, WiFi, calls and messages usage, with the option to set a notification when you hit a certain percentage of your allowed Data plan. The firewall is another neat addition that helps you deny access to Data and/or WiFi on a per application basis. These two options bundled together are quite useful if you don’t have an unlimited data plan, since you can keep an eye on your usage, as well as limit certain applications to WiFi-only access, for example. 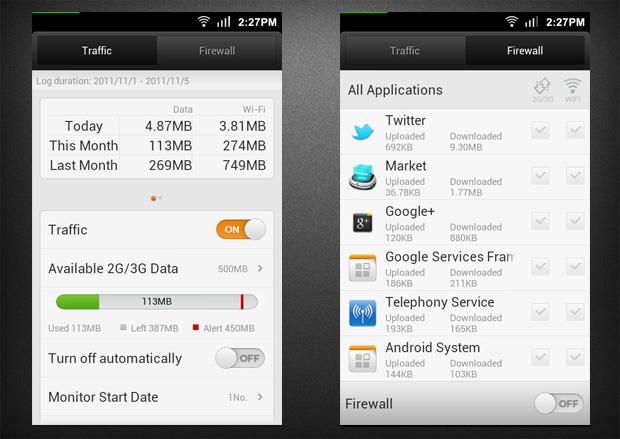 MIUI comes with a “Do Not Disturb” mode that allows you to block certain numbers from calling or messaging you. This helps you stay focused when you need to, or only allow access to you from your loved ones if you’re busy. It also saves you from installing third-party software to do this.

MIUI’s slew of great features can hardly be covered in 10 points, as it offers a lot more than the stock Android ROM. The Camera and Gallery are revamped for example. There’s a File Manager that also integrates an FTP server so you can access your SD card from your computer’s browser and transfer files easily. There’s also a Backup function that resembles Titanium Backup, saving your applications and their data so you can easily restore them after you uninstall or after updating ROMs. The drop-down status bar can be personalized to include notification toggles for WiFi, Data, Bluetooth, GPS, Flashlight, Screen rotation, Brightness, and many more… The battery meter can be shown in either graphical design, percentage numbers or as a top bar above the status bar.

All in all, there’s a lot to love and customize in MIUI.

5 Setbacks That Stand Between MIUI and Perfection

For all the customization options in MIUI, the launcher comes as quite a setback. It acts as a launcher and app drawer simultaneously so you can’t remove app icons, just place them in folders. You can add widgets and as many screens as you want, and you can also pick an animation style, but that’s as far as it goes. There are no options to rename apps or remove their labels, to change an app’s icon individually, and the most frustrating feature is how adding widgets work.

The UI presents you with only 4 widgets at a time and you have to swipe (not even scroll) through them, four at a time, to get to the widget you want to add. If you only have a few possibilities, the system works, but if you have something like Minimalistic Text or Beautiful Widgets that add a lot of widget options, then you will be swiping a lot, and missing, and swiping back. They are not even organized alphabetically, which makes it even more horrid.

MIUI Is Terrible on Older Hardware

I have an HTC Desire Z, which is considered slightly older hardware, with an 800MHz processor and 512MB of RAM. CyanogenMod ran perfectly on it, despite my 100+ installed applications and 20+ background processes. MIUI, however, is slow, leaves me with only 30-40MB free RAM on average, and hangs up frequently with a lot of Force Closes. This is a major letdown and quite frankly the only real reason I am going to uninstall MIUI soon.

I can’t speak for other phones, but I know that if you only have 512MB of RAM and run a lot of applications in the background, then you’re going to hit a wall with MIUI.

If you own a touch slab form factor phone, this is not going to make a difference for you, but I did notice that my Desire Z’s special shortcut keys (which worked perfectly to launch applications quickly on HTC Sense and CyanogenMod) are next to useless on MIUI. I have become accustomed to switching between Twitter and GTalk with these keys and having them stripped of their functionality was quite annoying.

The integrated keyboard in MIUI supports only a handful of languages, so if you speak a language that isn’t there, you will have to download and use another keyboard. Also, I have noticed that MIUI fails to display Arabic properly, which is a language that I use frequently. I have come across a few forum threads that mention problems with many other languages on MIUI, as well. As a comparison, CyanogenMod came with an Arabic keyboard and full Arabic reading support out of the box.

MIUI began as a Chinese ROM and the community started working on translations to make it available for other languages. The American version for example is almost perfect, aside from some Chinese elements that keep creeping up every now and then. For me, I don’t know why, but the browser seems to be stuck on a Chinese version of webpages, like Google for example.

MIUI: To Try, to Love and to Hate

If your device is rooted, if you love tinkering, or really if you’re just plain bored with your current ROM, MIUI is a refreshingly gorgeous alternative on Android. All the built-in applications have been revamped to add more functions and improve their performance, and you will have a lot of fun downloading themes and customizing the look of every tiny nook on your phone.

However, MIUI has some letdowns – most of which can be cured by some third-party applications, like a different browser, launcher and keyboard. The major drawback is the fact that it remains slow and rather buggy on older hardware, and if you have such a handset, you will find yourself constantly killing tasks and using an application like AutoStarts to prevent some applications from starting uselessly in the background. Personally, I love MIUI’s clean look and its integrated applications, but I will have to switch back to CyanogenMod because of the constant slowness and hangups I keep encountering.