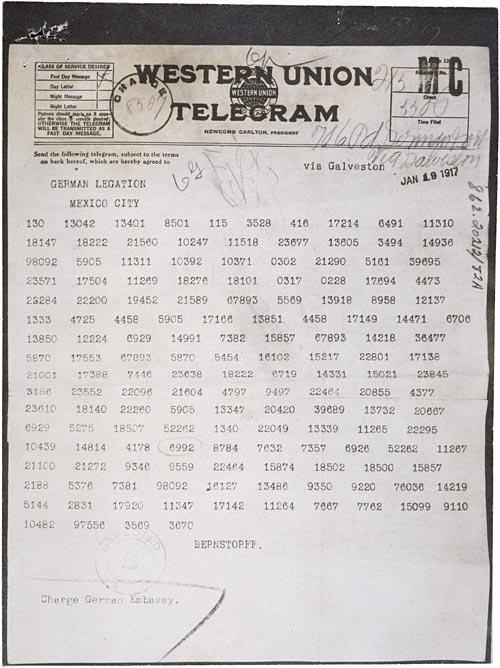 Erik Sass is covering the events of the war exactly 100 years after they happened. This is the 263rd installment in the series.

Germany’s decision to resume unrestricted U-boat warfare at the beginning of 1917 was arguably the worst strategic decision of the First World War – but Germany dug the hole even deeper by attempting to start a war between Mexico and the United States. Together these ill-advised moves turned American public opinion decisively against the Central Powers, setting the stage for U.S. entry into the war in April 1917.

The secret initiative to bring Mexico into the war – which didn’t stay secret for long – was laid out in the “Zimmermann Telegram,” a coded message first sent by the German State Secretary for Foreign Affairs Arthur Zimmermann to the German ambassador to the U.S. Johann von Bernstorff, who passed it along to the ambassador to Mexico Heinrich von Eckhardt (this indirect route was used in an attempt to avoid interception, futile as it turned out; below, the coded telegram from Bernstorff).

In his previous role as undersecretary of foreign affairs Zimmermann enjoyed some success fomenting dissension abroad to distract Germany’s enemies from the European war, most notably the Easter Rising in Ireland, which complicated British war efforts and delivered a stinging propaganda defeat to the Allies, supposedly fighting for the rights of small countries. On taking the reins from the previous foreign secretary, Gottlieb von Jagow, Zimmermann naturally continued his predecessor’s policy of stirring up trouble between Mexico and the U.S. in order to distract the latter – an easy task considering their fraught relations following the Mexican Revolution, Tampico Incident, the repeated depredations of Pancho Villa, and the Punitive Expedition.

But now Zimmermann planned a dangerous escalation, reflecting the mounting stakes. With unrestricted U-boat warfare set to resume on February 1, 1917, Germany’s leaders knew there was a very good chance it would provoke the United States to join the war against them, and so (despite reassuring predictions from military hardliners that the American effort would be desultory at best) were willing to consider any gambit to refocus America’s attention away from Germany – ideally on an enemy closer to home.

The Germans spared nothing in their effort to bring Mexico into the war, at least as far as promises go. The key enticement – and a diplomatic bombshell when revealed – was the offer to help Mexico win back the lost provinces of the American southwest, taken by the U.S. as spoils of victory in the Mexican-American War in 1848. Even more sensational, the Germans wanted Mexico to help convince Japan to turn on the U.S. as well, capitalizing on growing tension between the countries over Japanese expansion in the Pacific Ocean and aggression in China. The full text of the telegram delivered to Eckhardt read:

We intend to begin on the 1st of February unrestricted submarine warfare. We shall endeavor in spite of this to keep the United States of America neutral. In the event of this not succeeding, we make Mexico a proposal of alliance on the following basis: make war together, make peace together, generous financial support and an understanding on our part that Mexico is to reconquer the lost territory in Texas, New Mexico and Arizona. The settlement in detail is left to you. You will inform the President of the above most secretly as soon as the outbreak of war with the United States of America is certain and add the suggestion that he should, on his own initiative, invite Japan to immediate adherence and at the same time mediate between Japan and ourselves. Please call the President’s attention to the fact that the ruthless employment of our submarines now offers the prospect of compelling England in a few months to make peace. Signed, Zimmermann.

Unfortunately for the Germans, Eckhardt and Mexico’s leader Venustiano Carranza (who would be sworn in as president on May 1, 1917) weren’t the only ones privy to this shocking proposal, transmitted by coded telegraph. Unbeknownst to the German foreign ministry the British Admiralty’s cryptography division, “Room 40,” had been monitoring German messages since the war began, and were routinely able to decode these messages with the help of captured codebooks and ciphers.

The Zimmermann Telegram was originally dispatched from Berlin to Washington, D.C. on January 16, 1917 using standard diplomatic channels, which in wartime meant sending it on undersea telegraph cables via a neutral country – in this case Denmark. After receiving a copy of the intercepted message on January 17, 1917, the British code-breakers went to work and almost immediately realized the value of the intelligence gathered from the partially decoded document, which was bound to infuriate American public opinion and hopefully bring the U.S. into the war on the side of the Allies. They continued their work and by February 5 the message was nearly complete.

The Admiralty was understandably careful about sharing or acting on information uncovered by Room 40, in order to avoid arousing German suspicions that their codes were compromised, but the Zimmermann Telegram presented an opportunity too good to pass up. In order to bring the telegram to the attention of President Woodrow Wilson without tipping their hand to the Germans, and without disclosing the awkward fact that they were spying on American telegraph traffic, Room 40 chief Admiral William Hall came up with two clever ruses. First, the British would tell the Americans they obtained the telegram by bribing a telegraph company employee in Mexico; second, when it was time to go public they would make it appear the deciphered message had been obtained by British agents through treachery in Mexico City, rather than intercepted and deciphered as it crossed the Atlantic. 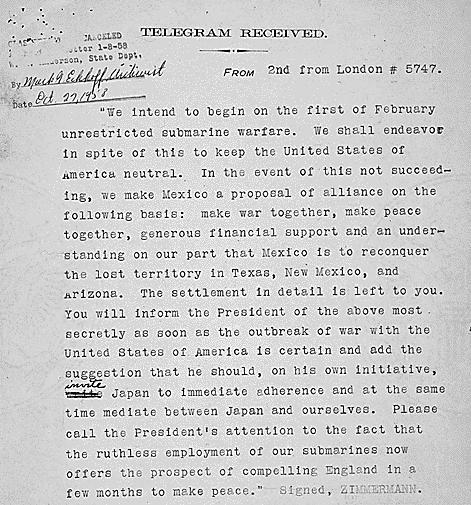 For now the British kept their secret to themselves, in the hopes that Germany’s resumption of unrestricted U-boat warfare would be enough to bring the U.S. into the war; they only disclosed the existence of the telegram on February 24, 1917, when their American cousins seemed to be dragging their feet (at which point the British were able to cover their tracks even more completely with the collaboration of the U.S. government, by staging additional deceptions to make it appear that it was American spies who obtained the text – this time through treachery in the German embassy in Washington, D.C. The full details of this exciting episode are set forth in Barbara Tuchman’s classic book, The Zimmermann Telegram. Above, the decoded version).

Meanwhile the Mexican government responded skeptically to the German proposal. U.S.-Mexican relations, while certainly at a low point during the Punitive Expedition, had apparently been improving since the summer of 1916, when Wilson disavowed war with Mexico and Carranza offered concessions. Further, Carranza’s generals warned that Mexico would never be able to absorb the large “Anglo” populations of the states in question, foreshadowing endless future conflicts with restive natives as well as the irredentist U.S. (top, an American cartoon after the telegram became public).

Worse still, Mexico would bear the brunt of the war by itself, with no prospect of effective help from Germany thanks to the British naval blockade – a daunting prospect considering the Mexican Army could barely secure the country’s own northern territories (Japan was also unlikely to go to war lightly, as it relied on imports of American kerosene, cotton, and steel, and also depended on America as its largest export market).

In short, Germany had unwittingly provided Britain with a deadly diplomatic weapon, sealing its own fate, all for the sake of an improbable – some might say fantastic – foreign adventure. Later, Zimmermann’s inexplicable admission that he was the author of the telegram put the final nail in the coffin of the reputation of Imperial Germany’s foreign service, already discredited by incompetent diplomacy in the lead-up to the war.

See the previous installment or all entries.