After Facebook began blocking links to an allegedly spammy website last month, WhatsApp appears to be doing the same to another competitor.

One Reddit user found a line of code in the WhatsApp Android application package (APK) that indicates WhatsApp is blocking any URL with the word “telegram.” Mashable confirmed the existence of this line of code, and Reddit users provided screenshots of URLs with “telegram” not appearing as hyperlinks in the app. 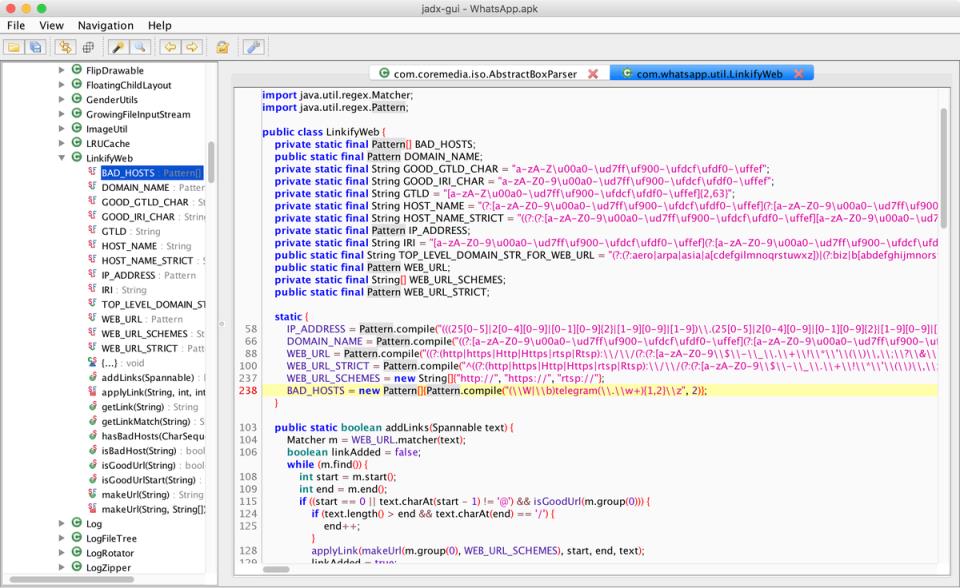 Though not nearly as big as WhatsApp, Telegram has a large user base and previously attracted millions of users when WhatsApp experienced a major service outage. Though both apps offer similar messaging features, Telegram claims its service is more secure. Telegram also offers public channels, which have come under some scrutiny in recent weeks. The app blocked 78 ISIS-related channels last month. (The company has said it doesn’t restrict private chats.)

Telegram’s CEO Pavel Durov noted in a tweet that roughly 80% of its users are on Android, providing a possible explanation as to why WhatsApp would only block links on that platform.

Whatsapp started censoring links to Telegram in their Android app (i.e. for ~80% of the users). pic.twitter.com/qV0vBLJpi6

This blocking follows a similar move by WhatsApp’s parent company Facebook, which recently blocked links to Tsu.co, a social network that pays its users a percentage of ad revenue every time they post. Facebook accused Tsu.co of encouraging “spammy sharing,” hence why it blocked links. Links were blocked on Facebook, Facebook Messenger and Instagram, though not on WhatsApp.