2017 marks the centennial of America’s engagement in World War I, also referred to as the Great War. The National Postal Museum will present a special exhibition to commemorate and reflect upon this anniversary. My Fellow Soldiers: Letters from World War I features personal correspondence to and from the front lines, thereby illuminating accounts of love, life and death in the tumultuous time of war. The presence of General John J. Pershing, commander of the American Expeditionary Forces overseas from 1917-1918, can be felt throughout the exhibition. “My Fellow Soldiers” is the opening line of a letter penned by Pershing following Armistice, in which he thanked all his troops for their service, sacrifice and courage. But before we get to the end of the war, let’s look back to the origins of America’s involvement, namely one important piece of communication. 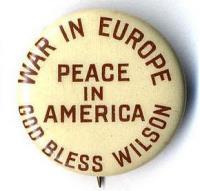 The My Fellow Soldiers exhibition opens on April 6, the day America officially declared war on Germany. Whereas the Great War had begun in Europe in 1914, the United States government endeavored a policy of neutrality. Public opinion aligned with this approach; President Woodrow Wilson successfully won a second term in 1916, championed by the slogan “He Kept Us Out of War.” However, 100 years ago today, a significant occurrence profoundly altered this attitude.

After the sinking of the RMS Lusitania in 1915 and the torpedoing of SS Sussex in 1916, Germany made various promises to abstain from attacks on unarmed ships of any nation, primarily with regards to passenger ships. Any prior pledge was nullified, however, when Germany announced its resumption of unrestricted submarine warfare on February 1, 1917. The policy was a direct threat to civilian lives and the sovereignty of neutral nations. Any ship within range – merchant, passenger, or naval; Allied or neutral – could be fired upon by the Central Powers. Exports from the U.S. East Coast stalled, as American merchants were reluctant to send their ships into a war zone (including cargoes of relief supplies to countries in need). Wilson responded by sending Johann Heinrich von Bernstorff, the German ambassador to the United States, his passport. A message, more or less, to be interpreted as, “Get out.” Wilson was applauded nationally for his subtle yet clear termination of diplomatic relations with Germany. Despite the fact that severing such ties is often a precursor to war, Wilson remained resolved to avoid any literal conflict.

Although Americans maintained their aversion to entering the war “over there,” the Germans surmised that any hypothetical U.S. contribution to the Allied forces would be meager at best. Mobilization is no easy or speedy task. What’s more, the United States had recently focused significant military attention on the Mexican Revolutionary Civil War. The country’s intervention in the Mexican War, beginning in 1914, is complicated in its own right. Following skirmishes with both revolutionary forces and Mexican Constitutionalist government troops, Wilson withdrew American military personnel in early 1917, thereby avoiding a full-blown Mexican- American war. Needless to say, the drawn-out conflict produced strong resentment between the two neighbors. 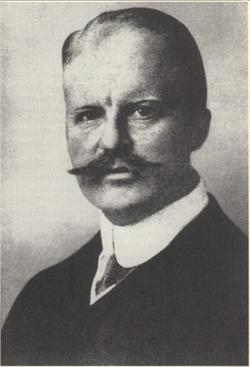 Relations between America and Mexico were strained in 1917, but Germany and Mexico sustained a decent rapport through their business and diplomatic dealings. All of these factors helped lay the groundwork for a critical development.  German foreign minister Arthur Zimmermann considered that his country’s forthcoming policy on unrestricted submarine warfare might provoke America into the war and thus set to work on a secret plan in early January. On the 16th of the month, his telegram written in German diplomatic code began its transmission through three different routes (including a cable service between the Berlin embassy and the U.S. State Department established by Wilson in his earlier attempts to mediate the intensifying conflict between the Central and Allied forces). Zimmermann’s telegram went from the German ambassador in the U.S., Count Bernstorff (prior to his recall in February), to finally reach the German ambassador in Mexico, Heinrich von Eckardt, a few weeks later.

The telegram instructed von Eckardt to propose a military alliance to Mexican President Venustiano Carranza, to “…make war together, make peace together…” As you can read in the decoded transcript below, Germany furthermore pledged Mexico financial provisions and “lost territory” within the states of Texas, Arizona and New Mexico. The telegram also suggested that Mexico influence Japan to join the Central Powers. In essence, Germany hoped America would be detained and distracted by a Mexican-declared war on the homeland. With American resources pouring into defense of her own territory, Germany concluded that the Americans would be ineffectual in providing supplies and military support to the Allied forces. Mexico rejected the offer on several grounds; not, in the least, that the American military forces were better equipped and a Mexican victory seemed improbable. With the Great War raging, Mexico additionally determined that it would be nearly impossible for Germany to provide “generous financial support.” 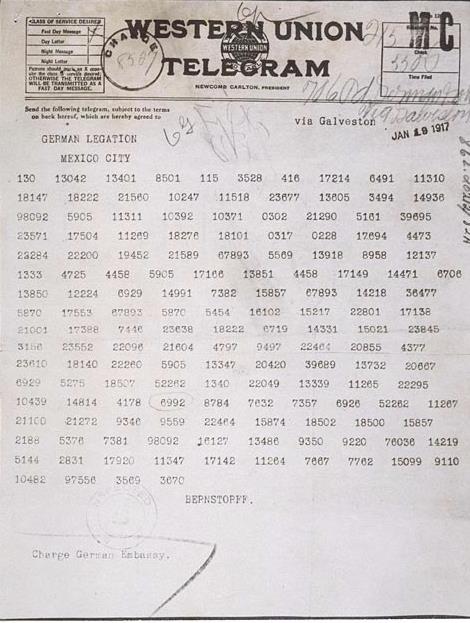 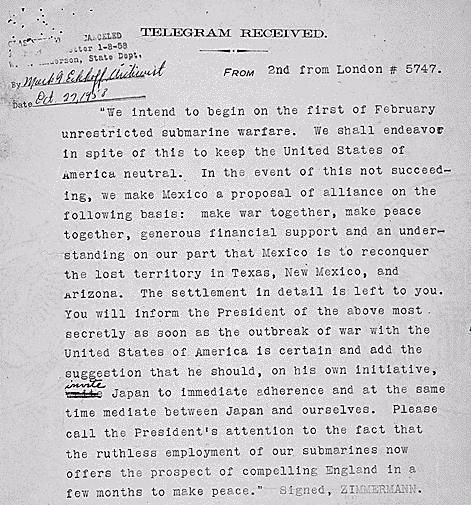 Unbeknownst to the Germans, the British Navy detected the telegram on all three routes and successfully deciphered its contents. Reginald Hall, the Director of British Naval Intelligence, arranged for the message to be sent to the American ambassador in London, Walter Hines Page. Page transmitted the message to Wilson, who received it in full the final week of February. Astonished and angered, Wilson authorized the publishing of the translated telegram throughout national news publications, which hit the stands on March 1, 1917. Americans were outraged by what they read in the papers; as described by historian David Stevenson: “…a psychological barrier had been crossed.” The war suddenly loomed closer, and American sentiment began to shift as never before.

Here at the National Postal Museum, we often find ourselves enfolding and unfolding the concept of correspondence. While the written letter and its accompanying postage are of particular importance to the museum, we are deeply interested in the transmission of information and the ever-evolving forms of communication. The story of the Zimmermann Telegram and its role as a key turning point in the war naturally relies on telegraphy – a most relevant medium at the time – as well as the American press outlets. The influence of the Zimmermann Telegram – on Congress, Wilson and his advisers, and the American public – is not to be understated. Additional provocations and circumstances, which we will explore in the coming months, engendered Wilson to request Congress to declare war on Germany. Passing with an overwhelming majority in both houses, America’s official declaration was made on April 6, 1917.

My Fellow Soldiers opens on April 6, 2017, at the National Postal Museum.

*Wilson authorized just one offensive campaign after revolutionary guerrillas attacked the town of Columbus, New Mexico, in 1916. The Mexican Punitive Expedition was led by Major-General John J. Pershing, the future Commander of the American Expeditionary Forces. He was promoted to General in May 1917.