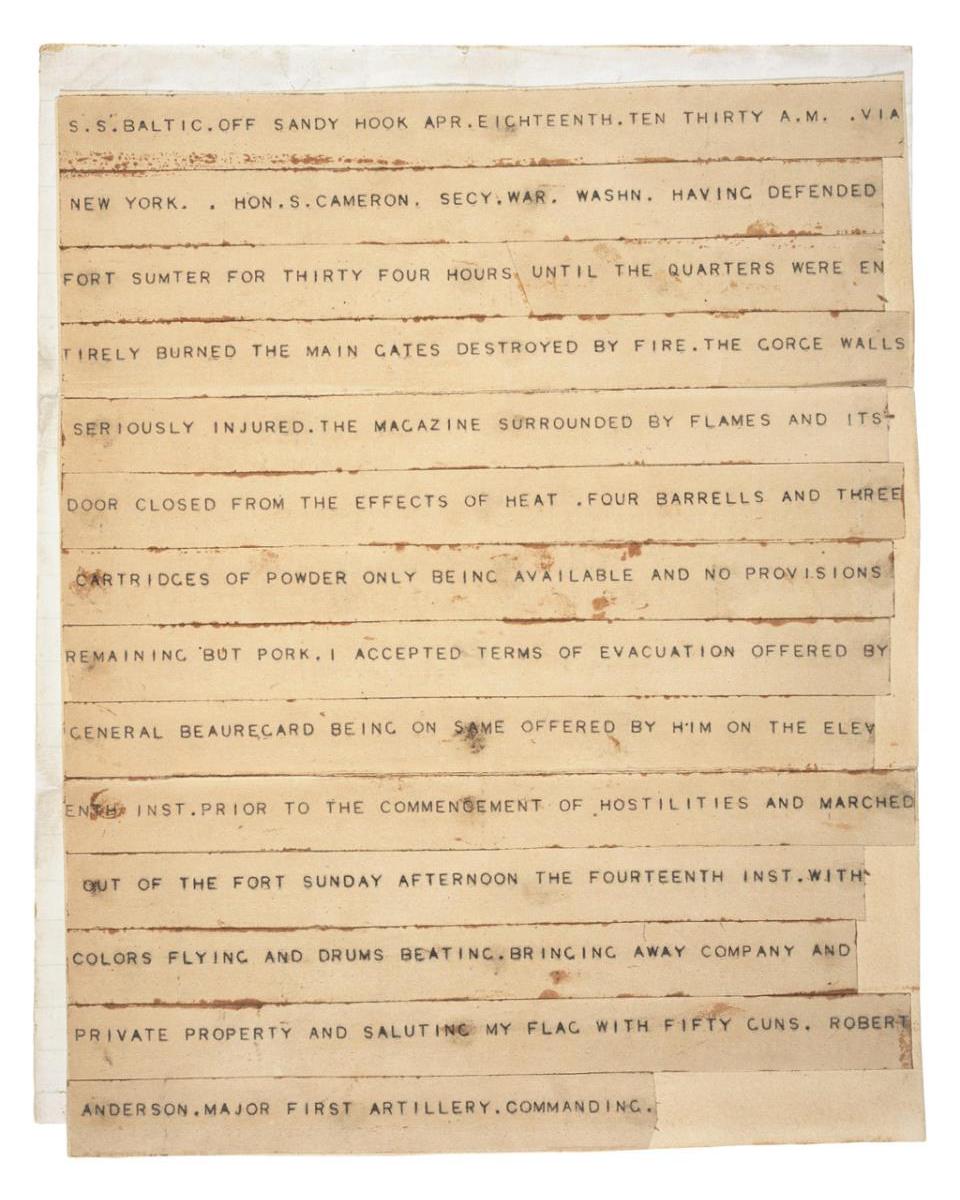 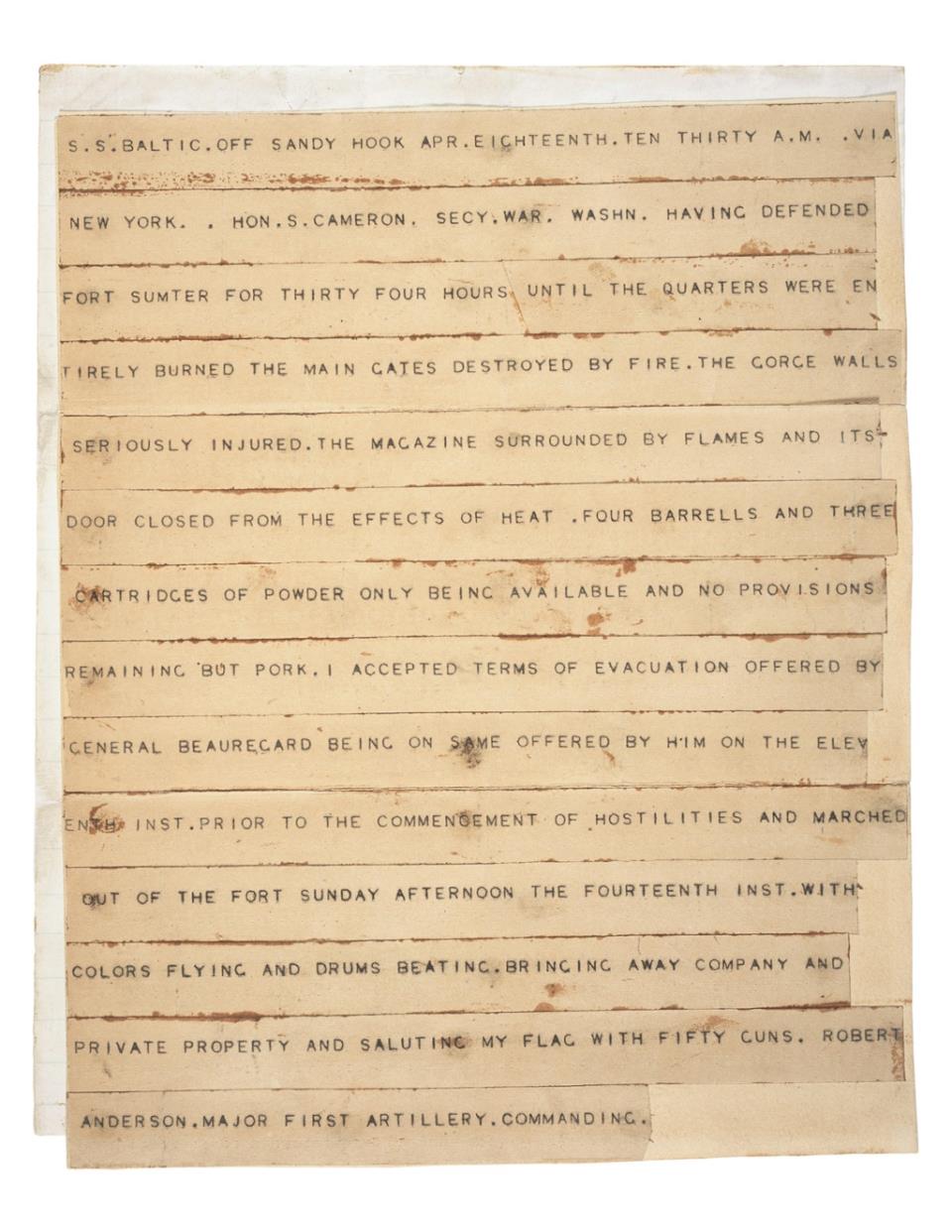 Following South Carolina’s secession from the United States and Abraham Lincoln’s inauguration as President, on April 10, 1861, Brigadier General Pierre G.T. Beauregard of the provisional Confederate forces demanded the surrender of the besieged U.S. garrison of Fort Sumter in Charleston Harbor.

The rebel forces numbered 10,000 well-equipped men while the defenders had only sixty-eight soldiers with inferior armaments and scant food and supplies. But the fort’s commander, U.S. Army Major Robert Anderson, refused to concede.

On Friday, April 12 at 4:30 a.m., Confederate Lieutenant Henry S. Farley, commanding a battery of two 10-inch siege mortars on James Island, fired the first shot at the U.S. fort, beginning a long cannonade. At about 7:00 a.m., Captain Abner Doubleday, Sumter’s second in command, fired the first salvo in response, aware that his guns weren’t capable of reaching their target. The Confederates’ bombardment continued for thirty-four hours.

Realizing that resistance was futile and lacking hope of immediate reinforcements, Anderson raised a white flag of surrender on April 13 at 2:30 p.m.

He was allowed to evacuate the following day and escaped to the North. As soon as he was able to do so, on April 18 at 10:30 a.m. Anderson telegraphed from the steamship Baltic off Sandy Hook to U.S. Secretary of War Simon Cameron in Washington, informing him of what had transpired. “HAVING DEFENDED FORT SUMTER FOR THIRTY HOURS,” he reported, “UNTIL THE QUARTERS WERE ENTIRELY BURNED THE MAIN GATES DESTROYED BY FIRE. THE GORGE WALLS SERIOUSLY INJURED. THE MAGAZINE SURROUNDED BY FLAMES AND ITS DOOR CLOSED FROM THE EFFECTS OF HEAT. ”

The document’s import was immediately clear. Robert Toombs, the Confederate Secretary of State, said at the time, “The firing upon that fort will inaugurate a civil war greater than any the world has yet seen.” Upon receiving the telegram, President Lincoln ordered 75,000 volunteers and called Congress into session. The assault became a rallying cry for the Union cause.

Although the attack resulted in just two Union soldiers killed and two wounded, with no casualties on the other side, the incident marked the opening engagement of the exceptionally bloody Civil War.

The original Fort Sumter telegram is kept in the National Archives in Washington, D.C.

This article is excerpted from Scott Christianson’s “100 Documents That Changed The World,” available November 10. 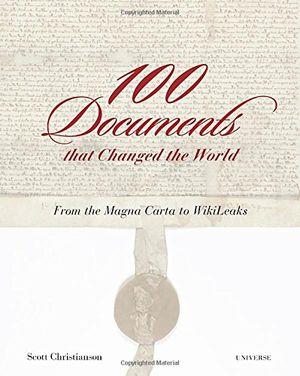 100 Documents That Changed the World

A tour of the history of the world through the declarations, manifestos, and agreements from the Magna Carta and the Declaration of Independence to Wikileaks.